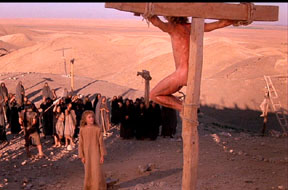 An imaginary story of what might happen if the sexually tempted Jesus came down from the cross and married and raised a family.

This brief review is reprinted from the article “The Judas Project in Context” in the May 1994 issue of VP.

THE LAST TEMPTATION OF JESUS, a long-time, heart-felt project of Martin Scorsese, generated the most conflict of any of the depictions of Jesus because novelist Nikos Kazantzakis dared to explore the implications of the statement in the Epistle to the Hebrews that Jesus in “every respect has been tempted as we are” (RVS). The church has always affirmed the humanity of Jesus in its creeds, but few of the faithful, until Kazantzakis and Scorsese, gave the “every respect” much thought. Willem Dafoe’s doubt-racked, man of anguish was too much for some folk, who condemned the film without seeing it. Strange enough, the last image we see is a smiling Jesus, relieved to find himself on the cross — the temptation to marry and raise children was but a dream planted by a benign-looking Satan in a futile attempt to get him to give up the cross. Regardless of what you might think of the film, none of the other Jesus films have as many scenes that can generate serious discussions of theology and ethics as this one.

For discussion helps see my book at Amazon JESUS CHRIST: MOVIE STAR. The book covers other Jesus films and some Christ figure ones as well, such as Cool Hand Luke.

An imaginary story of what might happen if the sexually tempted Jesus came down from the cross and married and raised a family.