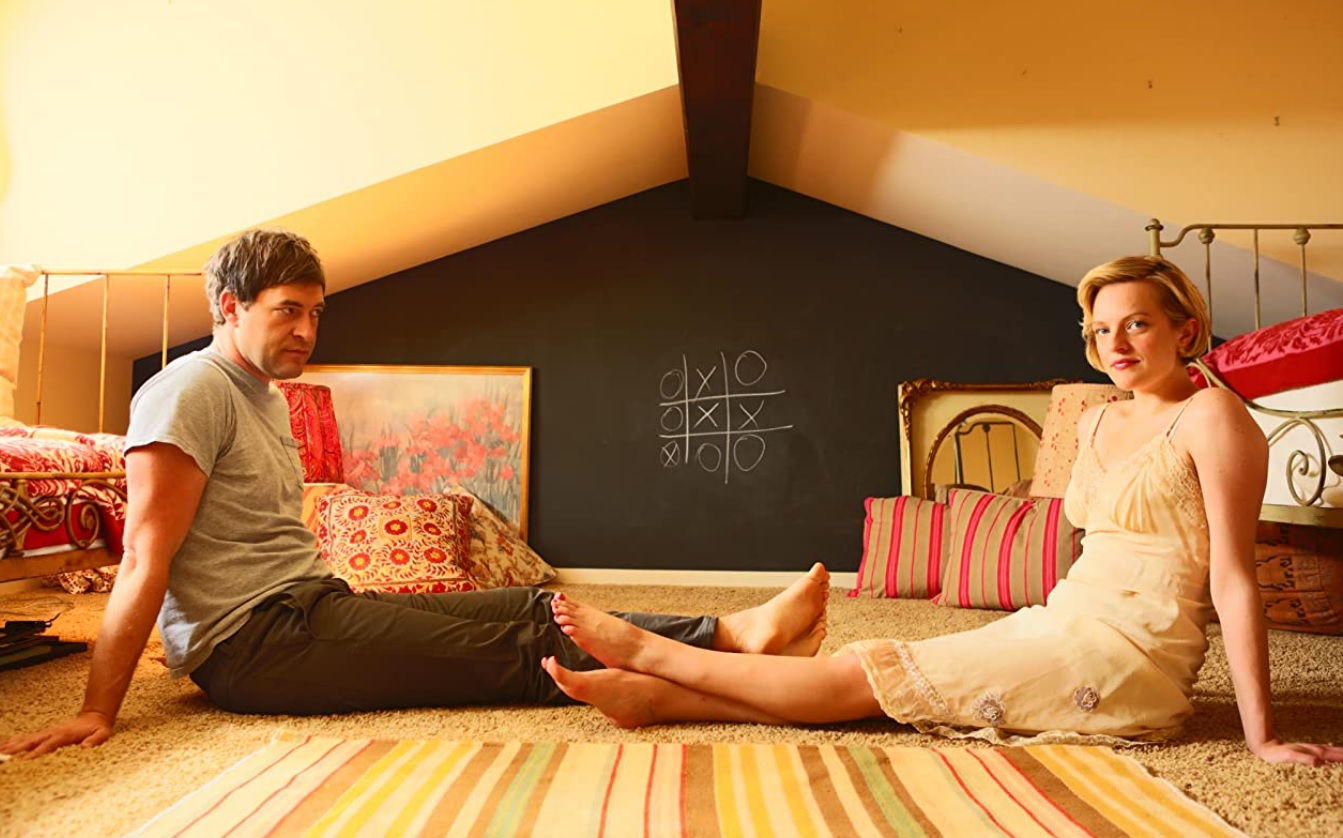 My brothers and sisters, whenever you face trials of any kind, consider it nothing but joy, because you know that the testing of your faith produces endurance;  and let endurance have its full effect, so that you may be mature and complete, lacking in nothing.

The old question “Can this marriage be saved?” runs throughout director Charlie McDowell’s 2014 film about a couple trying to regain the flame of the love that had brought them together. What happens to the young pair when they follow the advice of their counselor will change them both and leave you struggling to figure out what happened, thanks to Justin Lader’s screenplay.

Ethan (Mark Duplass) and Sophie (Elisabeth Moss), like many young couples, have lost the spark of their romance, despite a futile attempt to gain it back. They are bright enough to seek the help of a therapist (Ted Danson). When he takes out a glossy brochure advertising an idyllic vacation house for a weekend getaway and claims that several of his clients rejuvenated their marriages there, they decide to try it out. They really do not want to separate.

The couple have the resort all to themselves. (Which is a wonder in itself, the place is so beautiful.) Sophie prepares their supper; they smoke some weed and manage to engage in a conversation without quarreling. Sophie later wanders over to the charming guesthouse they had discovered earlier. Strangely, Ethan is already there, and they make blissful love. When she returns to the main house, she is surprised to find Ethan asleep on the couch. He wakes up and says he has no memory of what happened between them. What is going on? This question grows in intensity as there seems to be twin doppelgängers of them.

They argue and discuss, and even start to spy on one another, one surreal event piling on top of another. Ethan resorts to deception as well as spying. Then comes the time when both Ethans and Sophies are in the same room together, after which we must refer to them by numbers after their names. Several discoveries, including some files, suggest one possible solution to the bizarre events. One Ethan is knocked unconscious by an invisible barrier—what??—and the other Ethan drives off with one of the Sophies. They visit the therapist to demand an explanation but are left with further mystery. The twisted ending, hinging on breakfast eggs and bacon, leaves us with more questions than are answered.

This teaser of a film should be seen with others so you can share your confusion and insights. Young adult groups will benefit most, the film offering an opportunity to talk about relationships that change with time and new experiences. The author of the Letter of James sees “trials of any kind” as tests producing good results, but is that the case of Sophie and Ethan’s faith in each other?

Whether watched sololy or with a group, you might want to check the lyrics of the song played with the end credits, the Mamas and the Papas’ “Dedicated to the One I Love.” Especially intriguing is the line inserted at the end of the 2nd verse, “(love can never be exactly like we want it to be). If you prefer a film ending with lots of unanswered questions rather than tying everything neatly together, this should be your film.

When Ethan & Sophie's marriage counselor sends them to a resort they encounter a look-alike couple that complicates their relationship.
Editor Rating ★★★★★4 out of 5
More Details