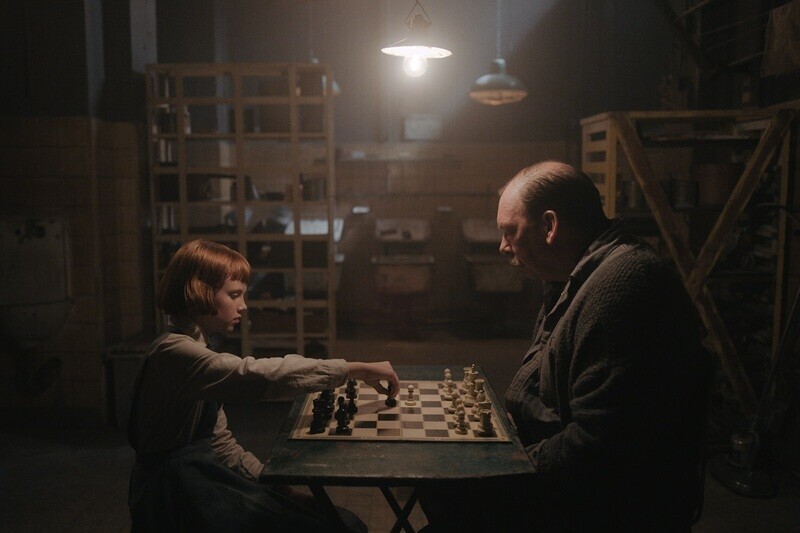 Father of orphans and protector of widows is God in his holy habitation.

The Queen’s Gambit, based on a novel by Walter Tevis, is about a female chess prodigy. She’s a young woman in a man’s world who becomes a formidable player. It is interesting to note that Walter Tevis also wrote a book that dealt with another game, that of pool, which also was adapted in 1961 into a riveting film, The Hustler, starring Paul Newman, Piper Laurie, and Jackie Gleason. And in that film the Piper Laurie character, like Beth Harmon, abuses alcohol.

In this series director Frank Scot uses the world of chess to explore sexism and substance abuse to great effect. Advised by World Chess Champion Garry Kasparov and chess coach Bruce Pandolfini, as well as a huge ensemble cast of very good actors, Scot is able to make the rather stationary game of chess exciting and suspenseful. The title of the series refers to a famous opening in which a player sacrifices the queen while gaining an advantage usually unforeseen by the opponent.

The story, set in Lexington Kentucky at first, centers on Beth Harmon, beginning when she is an eight-year-old girl (played by Isla Johnson) riding in the back seat of a car driven by her mother. The car crashes, killing the mother. Beth is unscathed, though left mentally damaged. That scene will recur many times, with each new occurrence including a bit more of what happened before the fatal crash. There being no father in the picture, Beth is sent to a Christian orphanage where the saccharine Helen Deardorff holds sway over the girls. She seems to be genuinely caring, but also very much determined to be in control. The children, according to the practice during the 50s, are given a daily dose of a green capsule of a tranquilizer in order to control the stresses they face.. She also at the home begins a friendship with the older Black orphaned Jolene (Moses Ingram) Beth’s friend who persuades her to save the green capsule so she can enjoy its buzz during the night. She also learns to play chess.

Beth’s teacher is the janitor, the lonely Mr. Shaibel (Bill Camp), whom the girl spots sitting in the basement playing the game by himself. He rebuffs her first queries about the game, but when she persists, gives in. She quickly learns the game, her visual ability to watch the pieces move on the ceiling of her dormitory enhanced by the tranquilizer. Soon she beats him. He invites his friend, a high school teacher who has organized a chess club, to come see her, and when she beats him, he arranges for her to come to the high school and play all the members simultaneously. By this time the state outlaws the free dissemination of the tranquilizers, so Beth suffers from withdrawal. Jolene comes to rescue, sharing her cache that she has saved by pretending to take one when they were handed out in the morning. Beth is able to beat all of the older students.

Beth, craving the capsules breaks into the school pharmacy while the girls and staff are watching The Robe. While she is unscrewing the padlock, climbing in, and ingesting a handful of capsules we see and hear snatches of the Emperor commenting on the condemned hero and heroine whom he has sentenced to be executed, suggesting what Beth also is seeking, “They’re going into a better kingdom!” The film ends while Beth is struggling to climb back through the window while carrying the huge glass jar of capsules. Not only is she caught stealing the tranquilizers, but her playing chess with Mr. Shaibel is also discovered. She is forbidden to play it anymore.

A few years pass, and a married couple visit the orphanage and are impressed by teenage Beth (now played by Anya Taylor-Joy). Alma Wheatley (Marielle Heller) and her husband adopt her, but the husband shows no interest in the girl. He just wants a companion for his alcoholic wife so he can stay away longer on his road trips. He soon abandons them both, but Alma is willing to cover this up so she can keep Beth with her. Her alcoholism makes her a neglectful parent, with Beth attending school in shabby clothing that contributes to other girls scorning and bullying her.

Beth enrolls in a chess tournament and wins $100. (Lacking the $5 registration fee, Beth had written Mr. Shaibel to ask if he would loan her the money, which he did.) Alma, concerned how they will make a living, forms a partnership with Beth so that the girl can keep on enrolling in chess tournament—and winning. She had no idea that one could earn sizable sums of money by playing chess. The rest of the film will see many suspenseful tournaments, culminating in the ultimate one in Moscow. Along the way Beth will encounter many interesting players—all men—and slowly overcome the strong bias of players and chess officials against women players. Beth will also have to cope with her addiction to the capsules, and when her foster mother introduces her to alcohol, to alcoholism as well.

The series title is a marvelous metaphor employed by writer/director Scott Frank to great advantage. It is the opening move that Beth chooses for her final match against the world champ and Russian King of the game Vasily Borgov (Marcin Dorociński). By the time she reaches the pinnacle of professional chess playing Beth will learn the importance of community and thus that she need not face the formidable Russian champion alone. (Earlier he had beat her in a match.) One of the American players who join with others back in New York and aid her over the telephone, had reminded her that the secret of Russian success has been that they help each other, that they approach the game as a team rather than, as do the Americans, as individuals relying on their own resources. Indeed, only through accepting the good will and help of others will Beth reach her goal. Her team back in New York work tirelessly to discover Borgov’s weakness in his game playing, something that she could not have done in the midst of the tournament.

One aspect of the series that I treasure are the many characters who are shown at some depth—the Russian boy player who wants to talk with her about life in America; the former Kentucky champion who assists in her training; the Russian champion who proves to be a good sport. There is a delightful vignette in which a girl whom Beth had played in her beginning days has journeyed to a match site just to see Beth and to wish her well. These, plus the delightful vignette at the end, I love: Beth walks through a Moscow park where a large number of old men sit absorbed in their chess games—until, seeing and recognizing Beth, they greet her warmly as they converge on her. Earlier the Cold War had been invoked when a conservative Christian offered to sponsor Beth’s Moscow trip as part of their campaign against “Godless Communism,” but this film eschews such chauvinistic approach, although it does include a State Department Intelligence Agent assigned to stay with her throughout the trip. All but one of the Russians are depicted as gracious competitors.

My only regret is that the only Black character in the story Jolene was not included in more of the episodes. I was delighted that the saucy girl who has fulfilled her dream of getting a law degree does show up when Beth is desperate for finances to make the Moscow trip, having turned down the so-called Christian group because she could not affirm their beliefs. It also with Jolene that Beth makes a return visit to their orphanage. The do not meet up with the elderly Mrs. Deardorff, but Beth does revisit the basement where Mr. Shaibel had inducted her into the world of chess. Even though long since dead, his bulletin board has not been touched. It is filled with clippings from the chess magazines and newspapers reporting on Beth’s victories. I felt Beth’s sadness over the fact that she had never written back to her mentor! She had lacked the maturity to be concerned about him.

The early Beth was a loner, as revealed in the 3rd episode when she comments to a reporter about the game, “I feel safe in it. I can control it; I can dominate it. And it’s predictable. So, if I get hurt, I only have myself to blame.” By the conclusion of the series, Beth has accepted help and with the support of Jolene and fellow chess players freed herself from her drug and alcohol dependency. Hopefully, she will become as much of a winner in life as in the game of chess. What a great story for parents to watch, especially with daughters, though sons also will benefit from bonding with such an appealing young woman fighting against great odds.

This review is in the May issue of VP along with a set of questions for reflection and/or discussion. If you have found reviews on this site helpful, please consider purchasing a subscription or individual issue in The Store.

The inspiring story of an orphan girl who becomes a chess prodigy, fighting against men who think a woman is an interloper.
Editor Rating ★★★★★5 out of 5
More Details