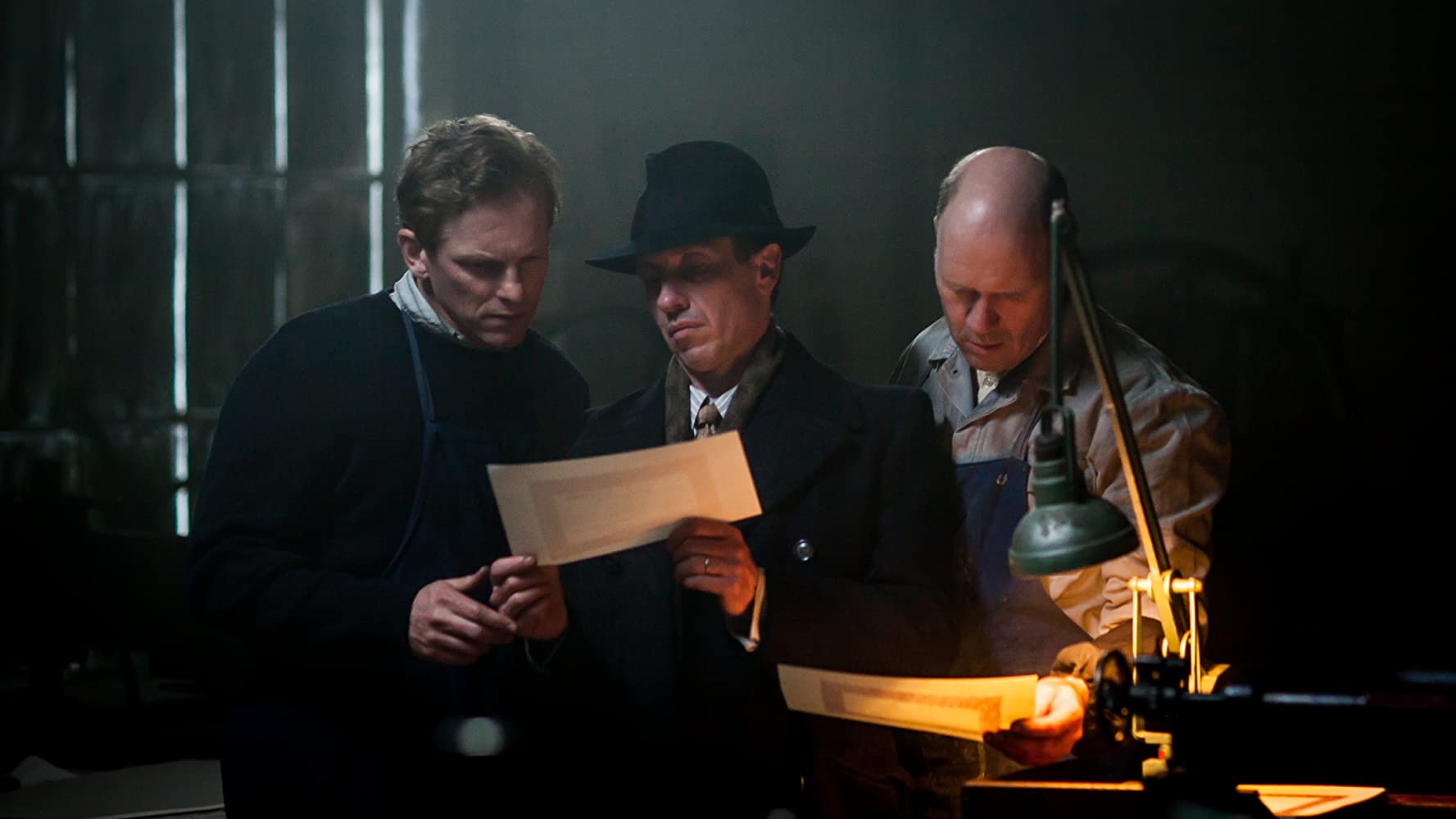 Dutch director Joram Lürsenfor shows us one more way in which an occupied people resisted Nazi tyranny. I love the way in which through the years such filmmakers manage to present a fresh view of WW 2 and of Nazi persecution. In 2007 there was the Austrian Best Foreign Language Film Oscar winner, The Counterfeiters, in which Jewish prisoners, expert at creating fake money, conspire to slow down the Nazi’s plan to damage the economy of the Allies by flooding the market with counterfeit money. In this new film, “based on a true story,” we have two brothers in German-occupied Holland who deal in real money—they are bankers—plotting to divert funds to help their people.

Older brother Gijs van Hall (Jacob Derwig) tells the amazing story to a group of investigators after the war of how Walraven “Wallie” van Hall (Barry Atsma) came to lead the daring resistance, According to him it was Wallie’s discovery in 1942 when a Jewish family, clients of his bank, all committed suicide that he decided he had to resist somehow the Nazis’ oppression. He shows to Gijs the flyer he had found beside the bodies of the dead. It was an order to all Jews to report for deportation and included instructions for liquidation of their property. Gijs at first refuses to take the risk of resistance, and though Willie’s wife Tilly (Fockeline Ouwekerk) expresses her fears, she quickly tells him he must.

Walraven proves to be a persuasive  person. Once a member of the merchant marine, he skillfully navigates the troubled waters  of his time. First, he has to convince a Resistance leader that he is legitimate, and then various members of the banking and financial business world to cooperate, one of the latter being the reluctant Gijs. Thanks to their efforts, money is raised to transport and hide hundreds of Jews and others, the money given to various resistance groups. Assuming such names as “The Oilman,” “Uncle Pete,” and “Van Tuyll,” Walraven became known as “the banker of the resistance.” With the cooperation of many, he is able to work right under the nose of the Nazi leader Meinoud Rost van Tonningen (Pierre Bokma) who was the president of the bank. A running joke among the resisters is “What is the similarity between Rost van Tonningen and the Dutch flag?” Only toward the end do we hear the punch line, as well as learn the fate of this Dutch collaborator.

One of several suspenseful sequences involves the robbery of the Dutch national Bank, an elaborate plan approved by Dutch authorities in London, that required the counterfeiting of bonds (supposedly “impossible”) and switching them with real bonds that were under lock and key and guarded by Nazi officials. The equivalent of a half-billion euros was raised. Later, when engineers and workers for the national railways system were planning a strike, Walraven managed to raise the funds to pay the strikers’ salaries, and thus prolong the disruption of Nazis use of the transportation system.

The humanity of Walraven, and thus the cost of his resistance work, is vividly portrayed in the many scenes of his domestic life. He adored his three children, teaching them to climb the large tree in their yard while helping the youngest to overcome his fear of heights. He has to leave his family in order to keep ahead of his Nazi pursuers, even though the latter do not yet know his identity. Near the end he returns home at night, but dares speak to just one of the children who wakes up. He spends the night with Tilly but has to be gone before dawn. There are also scenes of his sailing with the two boys in a small sailboat. These clips make all the more tragic his betrayal, interrogation, and execution.

Before his own end, other characters cooperating with Walraven are also caught and tortured. Fortunately, we are shown more of the results, than of the torture itself, but nonetheless, this is probably not a film for the entire family. Also, the pace of the film is slow and deliberate, so the patience of even some adults, especially those raised on summer blockbusters, will be overtaxed.

There are some shooting scenes, but neither of the brothers packed a gun, their resistance being of a different nature, similar to the two midwives depicted in the book of Exodus. Deception, something to be avoided in everyday life, becomes a necessary virtue when evil stalks the land. The Psalmist’s words, “For they eat the bread of wickedness/and drink the wine of violence,” certainly apply to the Quisling Rost van Tonningen and his German bosses. In several scenes Germans ruthlessly shoot resisters trying to flee, with the officer in charge delivering the coup de grace to the fallen victim. I know Gandhi believed so much that God is Truth that he decried deception, arguing that those who seek truth must never lie, even under Nazi rule. I suspect most of us would disagree, given that Walraven saved hundreds of lives, and through his aid to the railway strikers possibly shortened the war a bit. I should also add that his brother Gijs and a network of other Dutch patriots, many of whom were also caught and executed by the Nazis, greatly aided the “banker of the resistance.”

A hit in Holland when released in 2018, the film’s somewhat slower pace may tax the patience of some American viewers but will reward those who stay with it. We see too that There are a few action scenes spaced throughout, and the suspense surrounding the robbing of the Dutch Bank will please fans of the heist genre. Along with the unusual memorial statue of a large fallen tree opposite Amsterdam’s Dutch national bank, this film is a fitting tribute to the neglected heroes of the resistance to Nazi tyranny. I wonder if this metal statue, “Fallen Tree,” is the inspiration for the numerous scenes of the father climbing with his children the stately tree in their yard.

Note: The film is in Dutch with English subtitles, but I clicked onto the dubbed English version and found this fine, despite the disdain expressed in one review that I have read.

The true story of how 2 Dutch brothers, both bankers, managed to fool the Nazis & finance the resistance during WW 2.
Editor Rating ★★★★★4.5 out of 5
More Details