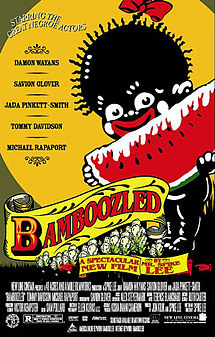 This is one of a number of films I have reviewed that help whites understand systemic racism, so I am bringing it up from our archives (Jan. 2001). It’s longer than most films, but like any Spike Lee film, it is well worth your time–and unlike some films about racism, provides a situation akin to Mel Brooks’ hilarious yarn about two would-be failures who become unexpected, and undesirable, winners The Producers.

Bamboozle \ to conceal one’s true motives from esp. by elaborately feigning good intentions so as to gain an end: HOODWINK


“Don’t let the world around you squeeze you into its own mould, but let God re-mould your minds from within, so that you may prove in practice that the plan of God for you is good, meets all his demands and moves toward the goal of true maturity.” 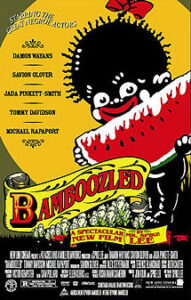 Spike Lee mounts another attack on entrenched racism in this, the funniest and hardest hitting satire about American television since “Network”! Actually, like Paddy Chayefsky’s film, “Bamboozled,” is a tragicomedy, with two of the characters’ fate similar to that of  “The Mad Prophet of the Airwaves.” Damon Wayans is Pierre Delacroiz, a talented African American writer obviously hired by the network for window dressing, because none of his suggestions for programs depicting in a realistic way black life are ever taken up. Not until the day when Dunwitty (Michael Rapaport), the liberal network head who thinks he understands African Americans because his uncle “marched with Dr. King,” gives Delacroix an ultimatum–come up with a program that will lift the network’s sagging ratings, or else. Delacroix comes up with an idea so outrageous that he is convinced the network will release him from his ironclad contract, and he can become free to follow his own creative pursuits.

The idea–a black-faced minstrel show, with blacks themselves playing all the roles. To his surprise, Dunwitty (who should better be named Dimwitty), goes for the idea because it so outrageous, so daring and unexpected that it is bound to capture the attention of America. Against the advice of his faithful assistant Sloan Hopkins (Jada Pinkett-Smith), Delacroix takes up the project in earnest, hiring two street performers he had often encountered outside his office building. Manray (Savion Glover) is a talented dancer who is given the stage name of Mantan. Mantan Moreland was a popular black actor of the 1940’s, who was best known as the wide-eyed chauffeur Birmingham Brown in the Charlie Chan movies. Manray’s nimble-tongued partner Womack (Tommy Davidson) also is renamed, one that revives all the 19th century minstrel show stereotypes of the black man–Sleep ‘N Eat.

The two performers are taken aback by the show’s format, but they swallow their pride–for a while–excited by the opportunity to gain a big audience and paycheck. Other African Americans come on board. making up such ensembles as “The Pickaninny’s” and “The Alabama Porch Monkeys.” When the show debuts before a startled live audience, the people are unsure of what they are seeing. There is silence as they look around at each other, trying to find a clue as to how they should react. The humor and the incredible dancing win over their hesitation, and they are soon applauding enthusiastically, even the black members. If there is a racist stereotype left out of the show, I don’t know what it is.

“Mantan The New Millennium Minstrel Show” raises a storm of controversy around the country but is a big hit with the television audience. Delacroix and crew find themselves celebrities, rich celebrities. But it also dawns on two of them that they have made a Mephistopheles bargain, one that will entail a high cost. Just how high they cannot conceive at the moment.

Spike Lee has provided another good opportunity for people to reflect upon and discuss racism in our society. He skillfully uses vintage black memorabilia to remind us of the long history of racial stereotyping. Someone gives Delacroix an old cast-iron bank shaped and painted like a black man with huge white eyes and red lips. As the show grows in popularity, the number of racist memorabilia in creases in Delacroix’s office. Also, at the end of the film, Mr. Lee shows us what amounts to a mini documentary of film clips of racist images from the past century’s films. especially painful are the images from what critics have hailed as our first great film masterpiece, “Birth of a Nation,” and the sight of great American stars using blackface–Judy Garland, Mickey Rooney, Bing Crosby, Bugs Bunny, and of course, scenes from “Amos and Andy,” once the most popular radio, and then television, show in the land. Mr. Lee manages to entertain us and yet make us uncomfortable at the same time, maybe inspiring us to look at film and television in a more perceptive way–and do something about the lingering racism that is till with us.

Reflection/discussion questions will be added in the August issue.

Spike Lee has a ball in this show biz satire in which a TV network greenlights a minstrel show filled with terrible racial stereotypes--the plot borrowed from The Producers.
Editor Rating ★★★★★5 out of 5
More Details