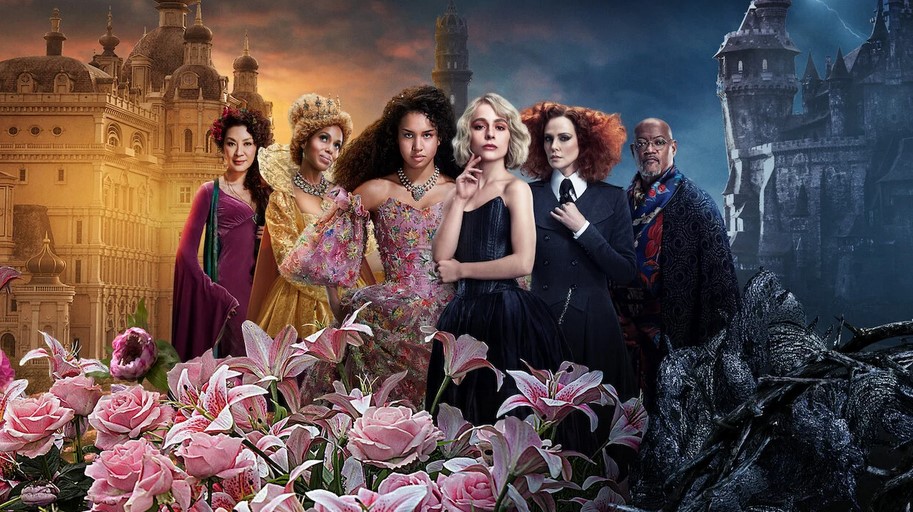 Director Paul Feig’s long film is based on a young adult fantasy adapted by its author Soman Chainani and David Magee. Partially set in an 18th century village called Gavaldon , most of it takes place in a fairytale world consisting of the two academies of the title. The latter is a Manichaean-type world where Good and Evil are supposed to exist in perfect balance and the Academy students are taught how to be good or evil characters in fairy tales. In fact, it begins at the academies where twin super powerful brothers Rafal and Rhian (both played by Kit Young) who share in the rule of the realm are fighting. Their mock dual turns deadly when Rhian uses “blood magic” and pushes Rafal off the cliff, supposedly killing him.

Meanwhile, narrator Cate Blanchett’s tells us, “Many years later, in a land far away, a story was unfolding …” in Gavaldan two girls, friends almost from birth, are scorned as outcasts, both being readers. The orphaned Sophie (Sophia Anne Caruso) and Agatha (Sofia Wylie) are very different in appearance and character. Golden-haired Sophie is a seamstress, dreaming to escape her humdrum life to become a princess. Her late mother had told her she was destined to “change the world.” Wild-haired Agatha has an offbeat mother who just might become al witch. Sophie wears frilly dresses, whereas Agatha favors boys’ duds. The share a love of reading, often visiting the Storybook Shop run by Mrs. Deauville (Patti LuPone ) together. It is here that they learn about the School for Good and Evil and Sophie decides to write a letter seeking admission and place it in the Wishing Tree.

Agatha does not want her friend to leave, but of course, Sophie is dragged off and then carried aloft by a winged creature, as is Agatha. Sophie is shocked, however that the creature drops her off at the School for Evil, whereas her friend is deposited at the School for Good. There follows a complicated series of adventures with some surprise reversals amidst violent battles that erupt.

The School for Evil is run by the glamorous and sharp-tongued Lady Lesso (Charlize Theron), the School

for Good, presided over by the bubbly Professor Dovey (Kerry Washington). The Headmaster is Rhian (now that he is much older, played by Laurence Fishburne). Sophia protests that she was placed in the wrong school, but is assured that no mistakes are made at the School. Later,  Rhia will tell her that she can change only if she finds her True Love and gets him to kiss her.

Called “Nevers” (Evil) and “Evers” (Good), the other students are offspring of famous heroes and villains, such as Tedro (Jamie Flatters) son of King Arthur; and Hort (Earl Cave) of Captain Hook. Agatha encounters the same kind of snobbery and exclusion by the girls of The School for Good as she did back at the village, so it makes us wonder what is so good about them?

There’s a lot of camp in much of the dialogue and acts of the characters—we often hear someone remark “Cool,” plus a lot of non-bloody violence, so parents of preschool children will want to beware. Middle school girls will appreciate the friendship of Sophie and Agatha, and especially the latter’s standing by her friend even when Sophie turns against her. Sophie provides a good example of how a good person can be perverted by wrong-headed desires and temptations that threaten her very soul. And yet in the end love wins out, with Sophie making a sacrifice to save her friend.

The old fairy tale romance is subverted by the girl’s friendship, and gay viewers can read much by the penultimate scene in the film, though one might question this by the very last scene in which Storian says, “This is only the beginning.” Is this setting us up for a sequel in which romance again rises up?

Believers in the Abrahamic faiths will reject the Manichaean premise of the fairytale. These three faiths all reject the idea of a balance between Good and Evil, teaching rather that traditional t a Good God will vanquish evil and establish justice and love throughout the universe.

The film, which has reminded many of Hogwarts in the Harry Potter movies, never rises to the height of that series, but is nonetheless entertaining. It’s subversion of boy-girl romantism in favor of friendship or sisterhood is fun to watch, and our daughters will be glad to see females who are more than the objects of rescue by a prince. However, I doubt adults will be as charmed by the film as we were by the Potter tales. Too many implausibility’s. Also, the film might be far too long for younger members of the family: it probably would have been better had it been made as a three or four-part limited series of 40 minute segments.

Along with gorgeous costumes and thrilling special effects, the saving factor is the cast. The two leads, Sophia Anne Caruso and Sofia Wylie, are very likeable. And the supporting cast, consisting of such stars as Kerry Washington, Charlize Theron, Michelle Yeoh, Laurence Fishburne, and even Patti LuPone and Rachel Bloom are a lot of fun to watch as they come and go. No classic here, but still enjoyable family viewing.

A fairy tale in which two peasant girls are placed in "wrong" schools at School for Good & Evil & face many obstacles as they figure out what to do to escape.
Editor Rating ★★★★★3.5 out of 5
More Details