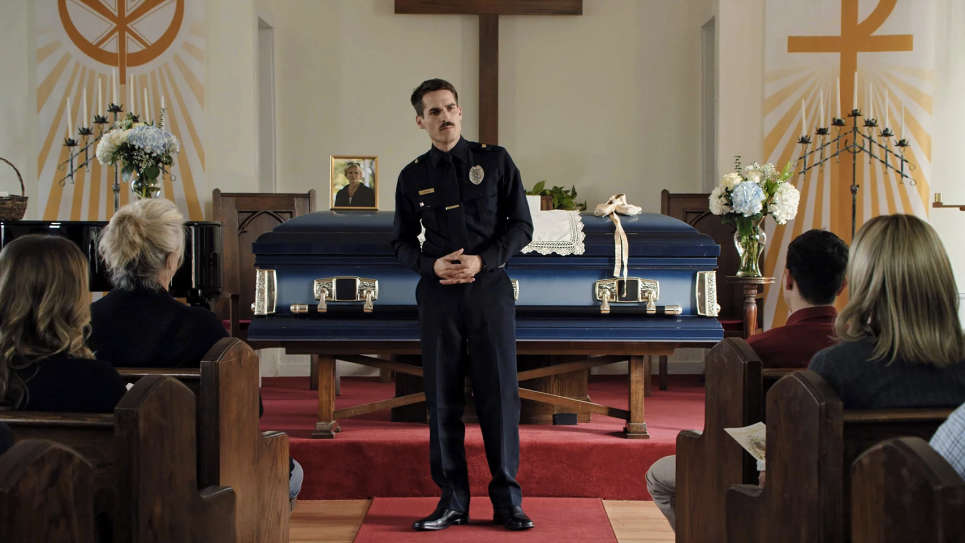 After this Job opened his mouth and cursed the day of his birth.

“I am not at ease, nor am I quiet;
I have no rest; but trouble comes.”

Jim Cummings wrote, directed, starred in, and even wrote the music and co-edited, this unsettling film about a Texas police officer who seems to be on the road to a mental breakdown. No, there is no shooting of a Black man by this white cop. This is a character study, not a social justice film. There is a Black man, but he wears a blue uniform too and turns out to be our troubled protagonist’s best friend. The film is billed as a comedy, but it often veers far more toward tragedy, with a few laughs in between. Cummings has taken his award winning 2016 short film and turned it into a deeply felt character study that has far more staying power than the usual comedy.

In the 10-minute cold opening Jimmy Arnaud (Cummings), decked out in his police uniform, walks to the front of a church where the casket containing the body of his mother stands on the platform. He is one of three children of the deceased, but the other two have opted not to attend. He has not written out his eulogy, and so he wanders the gamut from confessing that he didn’t appreciate his mother enough while she was alive to thanking her, and thanking those in attendance, reminiscing about his dyslexia and his mother’s love for Bruce Springsteen, especially the song that gives the film its title. A song that she used to sing to him. He has brought his 10-year-old daughter Crystal’s (Kendal Farr) pink tape cassette player, but he cannot get it to play. While fumbling around with the buttons, he tearfully mutters, “Should we call the manufacturer?” He gives up, mumbles some more, saying he will sing it, but instead breaks into a weird dance, trying to express with his clumsy body the song and its meaning for his mother. Jimmy had begun by saying  his mother “doesn’t believe in any of this.” Never invoking the name of God or Christ in his painfully long soliloquy, it is obvious that Jimmy too has lost whatever faith he might once have had.

This is about the most embarrassing scene I have ever watched in a film, and so it is for the people in the church, his young daughter perhaps wondering what has taken hold of her dad. I wish I could say this is the only such sequence in the film, but the hapless cop seems to have no filter between his addled brain and his mouth, and so finds himself in a series of mishaps— a public brawl, a robber committing suicide, an altercation with his best friend and partner Nate that leads to his being fired from the force.

And the preceding is just his professional life. In his private life there are: his unfaithful wife Roz (Jocelyn DeBoer) serving him with divorce papers; Crystal’s trouble relating to him (and we soon see why as he criticizes her using make-up and is over suspicious and critical of a boy who likes her). Roz asks for total custody of Crystal and then tells him she will move out of state, obviously intending to prevent him from seeing her. There is also an excruciating scene with Crystal’s fourth grade teacher, concerned over the girl’s misbehavior in class in which Jimmy reacts so inapprorpriately that it almost as embarrassing as the eulogy scene. At the custody trial Jimmy holds back on criticizing his wife for her infidelity, but she shows the judge a tape of Jimmy’s disastrous funeral eulogy, thus securing the court’s allocation of custody of their daughter to her.

One note of grace in Jimmy’s sad life is his friend Nate who will not give up on him. During one dark period Nate shows up at Jimmy’s house, despite all the bitter things Jimmy had said to him. The two drink together and then play together in the yard with a baseball. We also see that Jimmy could have developed into a compassionate cop. One night he breaks up a back-seat tryst of two teenagers. Concerned about her safety, he drives her home, agreeing to let her out a short distance away so her parents do not see her getting out of a police car.

His wife’s plan to leave town with her new boyfriend and Crystal ends in an unexpected, shocking way. Jimmy is faced now with a daughter whose emotional needs are as great as his own. The film’s brief denouement is hopeful, but having seen so much of Jimmy stumbling through his life, I am not as hopeful as the filmmakers are. Yes, there is the optimism and sense of adventure in Bruce Springsteen’s song that is partially brought up again, but other than his faithful friend Nate, what resources does Jimmy have? In the quote above the psalmist certainly knows sorrow, but unlike Jimmy, he believes in a God who can bring comfort. Jimmy has burnt his bridges in regard to a policeman’s career. How will he provide for Crystal and himself? I know, either one of these questions is perhaps too heavy to place upon a film some call a comedy.

I must say that there is no question that director/star Jim Cummings has incredible talents. That opening sequence is bound to become a classic of a man groping through the tangled underbrush of sorrow, unable to find his way out, and yet unable or unwilling to shut up and sit down, until he just runs out of words. That overworked baseball phrase has never been as appropriate as here: Jim Cummings as actor and director “swings for the fences,” connecting and hitting a home run. This is not typical cinema plex light entertainment soon forgotten. Whatever its flaws, you will remember Jimmy Arnaud for a long, long time.

A cop messes up his mother's eulogy, becomes angry with partner & loses his job and is about to lose custody of his daughter in divorce.
Editor Rating ★★★★★4.5 out of 5
More Details