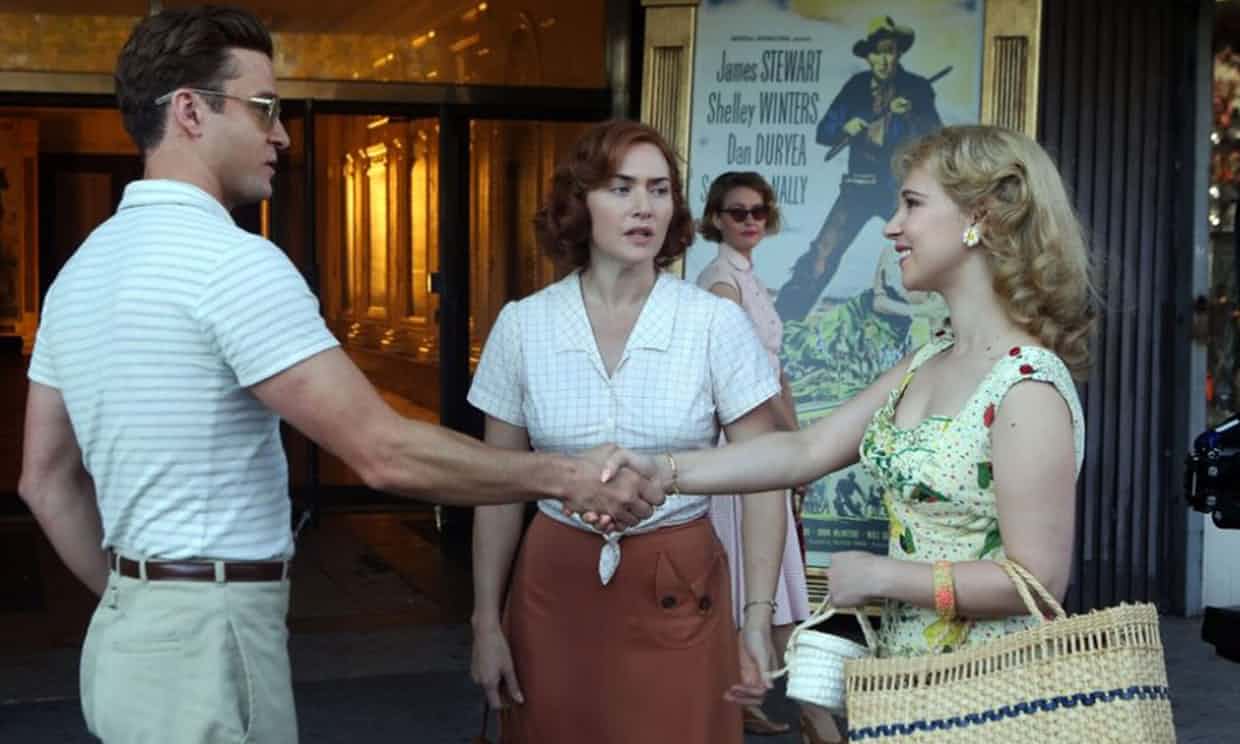 But he who commits adultery has no sense;
he who does it destroys himself.
He will get wounds and dishonor,
and his disgrace will not be wiped away

So whoever knows the right thing to do and fails to do it, for him it is sin.

Woody Allen’s newest film could have been a film noir, except for Vittorio Storaro’s glorious cinematography that captures the colorful hues of early 1950’s Cony Island so that some scenes seem to glow. Not so the characters, especially Kate Winslet’s waitress Ginny, who cannot get over her failure to succeed as an actress years before. She seems to be a female version of On the Waterfront’s failed boxer Terry Malloy (“I coulda been a contender”) when she regales her ten-year old son Richie (Jack Gore) with tales of her past as an aspiring actress while showing off her stage jewelry that she has saved. The boy almost totally ignores her. As we will see, he has his own problems, possibly triggered by his mother’s.

At various points the story is narrated by Mickey (Justin Timberlake), a wannabe playwright spending the summer as a Coney Island life guard. From his high perch he keeps an eye on the passing females more than on the swimmers. He notices both the newly arrived Carolina (Juno Temple), carrying a small suitcase as she arrives at her estranged father’s apartment close to the giant Ferris wheel that gives its name to the movie. He also had spotted Ginny and even though she was almost 20 years his senior, had been drawn to her. He may aspire to be a poet and a dramatist, but his moral depth is seen when, upon her revelation that she was married, he responds that it does not matter. The spaces beneath the wooden boardwalk offer lots of opportunity for them to fornicate. Considering their adulterous affair a passing incident before he returns to his Greenwich Village apartment and drama classes at New York University, Mickey fails to see how serious their trysts are for Ginny. She is very aware that she was to blame for the failure of her first marriage, but now bored with the insufferable Humpty (Jim Belushi) and approaching her 40th birthday, she repeats her past mistake. She escapes into the arms of her youthful lover, whose tales of having seen the world, and Bora Bora in particular when he was in the Navy, lure her into believing that he might take her to such a faraway place.

Ginny is also resentful that Humpty, who had written off his daughter because she had fallen in love and married a gangster despite his warnings, has reconciled and taken her in. The young woman has turned to him in desperation because she has squealed on her husband when the Feds put pressure upon her, and now the associates of her imprisoned spouse are searching for her—and it is not a marital reconciliation that they intend to pull off. Sure enough, two bulky-bodied goons show up at the merry go around that Humpty operates, but he is able to convince them that he is still estranged from her. They leave, but their menacing presence will be felt by all concerned.

Ginny is upset that Carolina has been hired at the same oyster bar where she works—and even more so when Mickey becomes attracted to Carolina upon being introduced to the girl. This and her troubles with her son Richie begins to unravel her. Drawn to fire, the young pyromaniac’s fires become increasingly dangerous. It was not so bad when he set beach debris ablaze, but when he sets a waste basket at the adjoining office of his therapist on fire, matters start to get out of hand. There is also the cost of the boy’s therapy, which Ginny pays for by stealing money from Humpty’s hidden cash box after he turns her request down. She knows full well that he intends to use the funds to pay for Carolina’s night classes, in the fond hope that she can become more than “just a waitress.”

Ginny’s fear that she is losing Mickey to Carolina keeps building, especially after she sees them together. The two thugs show up again, asking around the boardwalk about Carolina. They discover that their quarry will be meeting Mickey at a pizza place, and Ginny discovers their discovery. Now frantic, she knows she must telephone the parlor to warn the pair, or…

The film is not vintage Allen fare, but it comes close to the quality of his 2013 film Blue Jasmine. His character study gives Kate Winslet ample time to show off her acting ability, and the rest of the cast also deliver fine performances. The carnival-like setting of Coney Island, so different from the café society setting of many another Allen film, is beautifully recreated. The many bizarre, gaily painted banners and posters touting the various attractions match the tawdriness of Ginny’s situation and mindset. She is a mixed-up woman of failed dreams whose last great sin of omission is even greater than her sin of commission. Whether to condemn her or pity her, the director leaves up to his audience. Given his own past sins off screen, it might be the latter. However, once a fine moralist exploring metaphysical and moral issues, Woody Allen has long since, in the eyes of many viewers, lost any authority to teach about such matters. But even his detractors cannot deny that this octogenarian can still make interesting films worth watching.

This review with a set of discussion questions is in the January issue of Visual Parables.

A bored wife betrays her husband with a Cony Island life guard, & then her jealousy setting into motion a tragedy for her step-daughter hiding in their apartment from gangsters.
Editor Rating ★★★★★4 out of 5