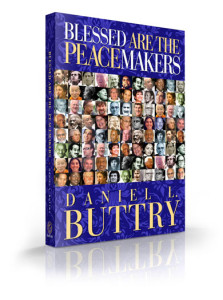 International peace educator and author Daniel Buttry is advising congregations nationwide not merely to sit back in awe of Abraham Lincoln and the 150th anniversary of the Emancipation Proclamation—but to roll up sleeves, organize discussion groups and fuel renewed grassroots activism. Buttry writes: “As someone who has been a peace and justice activist for almost 40 years, I’m delighted to see attention focused on the Abolitionist movement. Steven Spielberg’s movie Lincoln will give a lot of attention to the Emancipation Proclamation, and rightly so. But deep social and political change usually happens from the bottom up, not the top down. The Abolitionist movement didn’t arise from great politicians like Lincoln or even Wilberforce, but from ordinary people who sacrificially struggled for a cause that consumed their souls.”

To help local groups dig deeper into this inspiring history, Buttry is giving free access to two chapters from his new book, Blessed Are the Peacemakers, which you can feel free to print or repost or email or “like” on Facebook to share with friends. Visit Buttry’s book page and you will find links to chapters on the American abolitionist Frederick Douglass and the influential British abolitionist Thomas Clarkson. Why learn about Clarkson and Douglass at this historical milestone—the 150th anniversary of the Emancipation Proclamation? Buttry explains: “In the earlier movement to end the slave trade in the British Empire, the most important activism came from a handful of religious activists on the margins of society with the audacity to take on the immoral trade at the heart of the British economy. From that group Thomas Clarkson became the organizing hero who invented many of the tools used in grassroots campaigns today: He created stunning graphics (the iconic drawing of slaves crammed into the slave ships moved ordinary people to the obvious injustice); he encouraged the purchase of fair- or free-trade products (freedman sugar); he organized book tours (Olaudah Equiano’s best-selling autobiography as a slave who earned his freedom); he helped to gather petitions from the public (presented in Parliament by William Wilberforce).

“In the U.S. the Abolitionist movement also began from the grassroots, from freed and escaped slaves such as Frederick Douglass and Sojourner Truth and from people of conscience who aligned with them such as William Lloyd Garrison and Harriet Beecher Stowe (author of Uncle Tom’s Cabin).  They all spoke and wrote and traveled tirelessly stirring up people to join the cause.  Such grassroots activism creates the climate that forces presidents and parliaments to act, sometimes in directions they would rather not pursue. These principles worked in the historical turning-points when slavery was quashed in Britain and later in the United States—and they can work for good to this day.”

HOW LONG WILL LINCOLN AND ABOLITIONISTS BE SO POPULAR We hope: Forever. In terms of American popular culture: Certainly through this winter. Why? Right now, Steven Spielberg’s Lincoln is receiving rave reviews, including this one from faith-and-film author Edward McNulty (who includes a free small-group study guide with his review). In addition, McNulty has written an overview of the often-debated question of Lincoln and his religious faith. Film critics report that it is almost certain that Spielberg’s film and some of his cast will be nominated in the February Oscar awards. Then, there will be a subsequent release of the film on DVD and Bluray in spring 2013. In addition, January is the 150th anniversary of the Emancipation Proclamation and the PBS network plans to air a major documentary series on the life of Douglass and other abolitionists.

Prepare now for a lively discussion group in your congregation. Order a copy of Daniel Buttry’s Blessed Are the Peacemakers, now, because that book makes it clear why the abolitionists’ legacy is still active today. Buttry’s book follows peacemaking through the 20th century civil rights movement and into the global influence of that activism in countries around the world.

Buttry concludes: “Abolitionist movements are not just a thing of the past. There are more people today in forced servitude around the world than at any time in history. Slavery still exists including the sexual exploitation of millions of women and children in an insidious trade of human trafficking. This issue has only recently reached into national and international political awareness. It is the grassroots activists working on streets, in slums, in shadowy corners of cities and countrysides, in churches and community halls who have uncovered this terrible trade and are forcing their way into our consciousness—and our conscience. We need to learn from the past and be inspired by it so we can rise to the abolitionist task before us today.”