Mindy Corporon returns to the site of the vigil on the night of the murders and talks with the Rev. Kelly Demo, a co-host of that 2014 vigil. You can see this remarkable video, below. 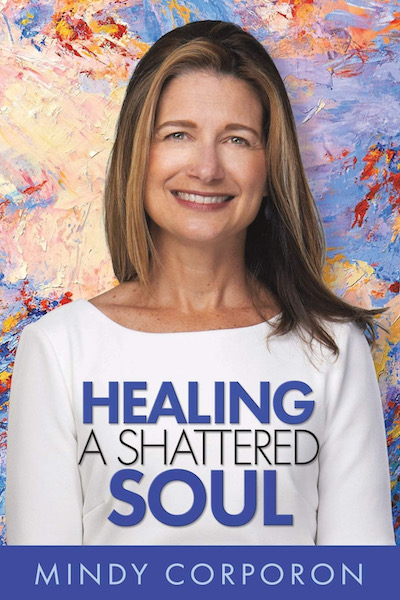 Click the cover photo to visit the book’s Amazon page.

The events of this past week would have devastated a lesser prophet, but Mindy Corporon weathered tragedy and dared to return to one of the most emotionally traumatic scenes of her life this week—with a recommitment to her message of compassion.

First, if you need more background about this story, here is our recent cover story about Mindy and her new book, Healing a Shattered Soul. Mindy lost both her father and her young son in 2014 when they were murdered by a white supremacist intent on killing Jews in Overland Park, Kansas.

Then, here’s the news: The same day that ReadTheSpirit cover story was published, the killer died in prison. He was on death row, but died of what prison officials said were “natural causes,” likely stemming from his chronic emphysema. On that May 3, 2021, book-launch day last week, Mindy’s book already was reaching readers nationwide and the NPR news network even quoted a brief response from Mindy in its news report about the killer’s death.

You may note, however, that we are not using the name of the killer in this article—nor does his name appear anywhere in the 300 pages of Mindy’s book. On May 3, Mindy’s family released a statement reflecting on the killer’s death, including these lines:

“We choose to not use his name ensuring he occupies zero percent of our consciousness. … The murderer took the lives of two Methodists and a Catholic while intending to murder Jews. No one should have lost their lives at his hands. We are neither happy nor sad. He stole so much from our family, but he didn’t steal our hearts or our dignity. He did not steal our memories, the love that sustains us or the ability to offer forgiveness and kindness in the face of such tragedy.”

As astonishing as this may seem—on May 6, 2021, Mindy returned to the scene of deep emotional catharsis on the night of the murders: St. Thomas Episcopal Church. The book includes a full-page photograph from the community-wide prayer vigil that night in 2014, showing a devastated Mindy clutching the hand of her close friend. That photo opens Chapter 16, which describes the vigil that night at St. Thomas.

Then, on May 6, 2021—at the invitation of the St. Thomas clergy, who hosted the prayer vigil seven years ago—Mindy returned for a triumphant, prophetic public talk. She read from the book and then spoke in a dialogue with one of the pastors. This was the same spot where she felt compelled to speak, even if haltingly, on the night of the murders.

On that night in 2014, Mindy managed to say, in part, “I can’t tell you how much it helps to see other people.”

In her return on May 6, 2021—in the wake of years of grieving and even the latest breaking national news of the unrepentant killer’s death—Mindy once again told the crowd, and all of us, that healing should continue and all of us should continue reaching out in compassion.

You can see that remarkable appearance at St. Thomas on May 6, 2021, in the video below: