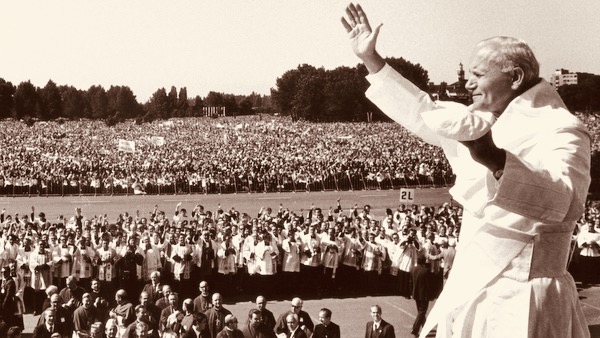 Pope John Paul II visiting Poland in 1983 during the years when his messages inspired the Polish people to rise up. (Photo by Vatican photographer Arturo Mari)

“Created in God’s image, we were given the mandate to transform the earth. By their work people share in God’s creating activity….Awareness that our work is a sharing in God’s work ought to permeate even the most ordinary daily activities. By our labor we are unfolding the Creator’s work and contributing to the realization of God’s plan on earth.”
Pope John Paul II in his landmark encyclical Laborem Exercens in 1981

MONDAY, SEPTEMBER 3—Amid parades, parties, shopping and travel this Labor Day weekend, consider giving this holiday the merit it really deserves: Take a look at the history and relevance of labor in the lives of American workers. In addition, spend some time considering how our religious traditions have emphasized the sacred nature of human work since the Genesis story of Adam and Eve.

Labor Day honors a value that has been a part of religious reflection for thousands of years. Psalm 90 in the ancient Hebrew scriptures ends with a prayer that God will “prosper the work of our hands.” In Islam, the Quran talks at length about the nature of our work and the morality of conducting ourselves in the public square. For two centuries, popes have written extensively about the sacred nature of labor. Long before John Paul II’s Laborem Exercens fueled the workers’ movements in Poland, Pope Leo XIII laid the groundwork for modern Christian teaching about labor in Rerum novarum, which called on international efforts to alleviate “the misery and wretchedness pressing so unjustly on the majority of the working class.”

A Labour Day parade in Toronto, Canada, 1900. Labour Day was made an official holiday by Canadian Prime Minister John Thompson in July of 1894; less than one month later, Labor Day became a federal holiday in the United States. Photo courtesy of Wikimedia Commons

Why do we refer to “American Labor Day” in this column? Because American leaders in the late 1800s feared that a May holiday, which was favored by labor activists, would encourage memories of the tragic Haymarket conflict in Chicago. What began as a peaceful labor demonstration in Chicago’s Haymarket Square wound up in headlines around the world after a bomb went off, police opened fire and many were killed or wounded. The tragedy continued through subsequent court cases. That May event in Haymarket Square well over a century ago is remembered, to this day, in May 1 labor holidays around the world.

Instead of a May holiday, then, American leaders preferred to remove “our” holiday from that tragedy by four months in our civic calendar. Instead, American holiday planners encouraged street parades and public displays of the strength and esprit de corps of the trade and labor organizations in each community—including cheerful festivities and recreation for workers and their families. (Wikipedia has details.)

In addition, the Sunday preceding Labor Day is known as “Labor Sunday”—dedicated to the spiritual and educational aspects of the labor movement.

In the late 1800s, leaders in the Knights of Labor worked diligently to spread awareness of this holiday. Terence Vincent Powderly, leader of the Knights’ outreach, wrote on the influence of religion, “Trade-unionists, members of guilds, leagues and other organizations of workingmen embraced Christianity and proclaimed its doctrines as being especially advantageous to the welfare of the toiling poor.” Powderly’s preamble to the union’s Declaration of Principles quoted Scripture and described the dire challenges of the working class in terms similar to the writings of Leo XIII. That was no accident. Powderly was a devout Catholic, visited the Vatican and for a time had the active support of American Catholic bishops.

Want some recommendations of great books on labor? Our ReadTheSpirit short list of recommended reading echoes other online lists of widely praised books on these issues. We urge readers to pick from the following (the links take you to Amazon): 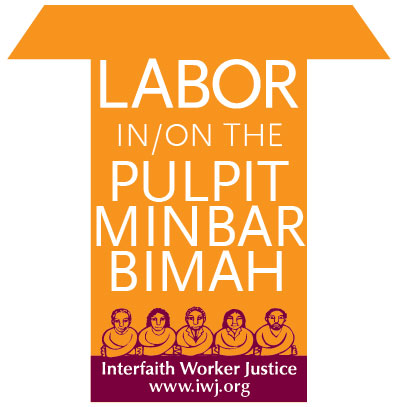 For more than two decades, the Interfaith Worker Justice (IWJ) network has been a gathering place for interfaith reflections on the nature of labor—and the needs of workers. The IWJ website offers many free resources under the banner: Labor in/on the Pulpit, Minbar, Bimah. In its resource page, the IWJ also quotes the current Pope Francis:

“Human rights are not only violated by terrorism, repression, or assassination, but also by unfair economic structures that creates huge inequalities.”