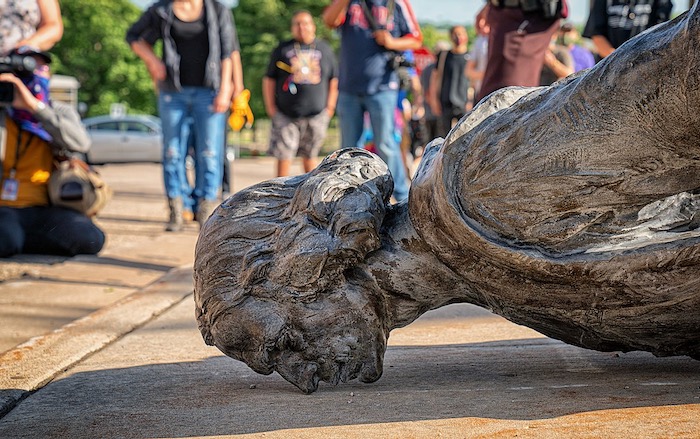 The fallen Christopher Columbus statue outside the Minnesota State Capitol after a group led by American Indian Movement members tore it down in St. Paul, Minnesota, on June 10, 2020. CLICK ON this photo to learn more at the Minnesota Public Radio website.

MONDAY, OCTOBER 12: How are Americans marking Columbus Day, if at all?

They’re shopping. Yes, it’s still a public holiday in many parts of the U.S. A review of Google-News stories covering the holiday in 2020 shows an overwhelming attention to sales—from mattresses to new cars—and also to family activities having nothing to do with historical reflection—like where to go see the most colorful leaves across the northern states.

It’s as if newspaper, TV and radio journalists somehow missed the fact that three dozen Columbus statues have been toppled nationwide, according to Wikipedia’s tracking of these removals.

And, perhaps that’s a fitting end to a turbulent year in which Columbus’ controversial aura as an American “hero” was extinguished across many regions of the United States. This holiday is still on the books in many places, but it’s fading in significance. Meanwhile, many regions continue to actively downplay the old observances. Among the most recent taking action was the Baltimore City Council. In the Southwest, Arizona’s Gov. Doug Ducey recently gave indigenous people a special salute alongside the existing October 12th Columbus observance.

Why do we think it’s fading? Well, we also note that Forbes is reporting that Columbus Day sales are losing their traditional appeal. Maybe the U.S. News staff was a little too quick to climb on the Columbus bandwagon for one more year.

The Washington Post traveled to Italy to publish a somewhat positive story about the holiday under the headline: Much of America Has Stopped Celebrating Columbus Day, but the Explorer Remains Revered in Italy. To its credit, that Post story begins with an overview of this year’s protests across the U.S. The Post staff didn’t forget all those protests in cities nationwide.

Apparently trying to change the subject, The New York Times’ main coverage of the holiday (as of October 11) is a book review, recommending 5 Books to Help Your Child Understand Columbus Day. We have to give the Times a salute for coming up with a constructive story about the holiday that actually involves exploring our history with kids. And, stay tuned, maybe the Times will post something else about Columbus Day on the 12th or perhaps in its wake if more protests emerge.

After all, we certainly need to think about the complicated roots of cultural and racial clashes that formed our American communities across these North and South continents. We’re doing that already in a host of ways. All year long, holidays and festivals across North America reflect the colorful facets of America’s growing cultural diversity.

But few holidays have exposed the friction in U.S. history as much as Columbus Day, which was intended to celebrate the arrival of Christopher Columbus in what is now called the Americas in 1492. For more than a century, the holiday has been championed by Italian-Americans as showcasing their many contributions to the U.S.

NEW LAST YEAR, Pew Research published an in-depth look at the varying approaches to this annual milestone across the U.S. NOTE: This still is a fascinating resource, even though much continues to change in 2020.

The Pew report begins: “Depending on where you live and whom you work for, Columbus Day may be a paid day off, another holiday entirely, or no different from any regular Monday. Columbus Day, the second Monday in October, is one of the most inconsistently celebrated U.S. holidays. It’s one of 10 official federal holidays, which means federal workers get a paid day off. And because federal offices will be closed, so will most banks and the bond markets that trade in U.S. government debt (though the stock markets will remain open). Beyond that, it’s a grab bag.”

Here is a link to the entire Pew report—with accompanying maps so you can see how your part of the U.S. compares with others.