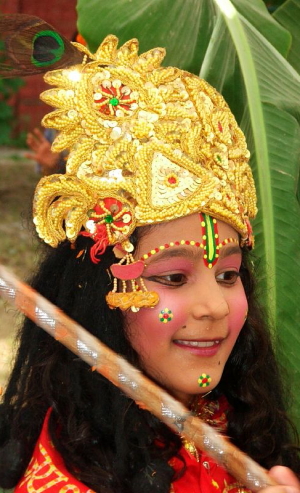 A girl is dressed up for Krishna Janmashtami. Photo courtesy of Wikimedia Commons

MONDAY, AUGUST 30: Millions of Hindus worldwide revel in the spirit of Lord Krishna, fasting, chanting, indulging in sweets and celebrating for the grand festival of Krishna Janmashtami. An observance that lasts eight days in some regions, Krishna Janmashtami honors the birth of the Hindu deity Krishna, the eighth avatar of Vishnu. To devotees, Krishna is the epitome of many characteristics: according to ancient texts, he is a mischievous and fun-loving child, a romantic lover and an empathetic friend.

Did you know? According to legend, Lord Krishna reciprocates devotions in ways unique for each devotee.

On this, Krishna’s birthday, events begin before sunrise and last through midnight. Public and private prayer can include chanting, singing and more. Feasts of many dishes are often prepared, and dances and dramas depicting the life and ways of Krishna are watched with fanfare. Some devotees dress or decorate statues of Krishna, while others string garlands across temples or in their homes.

Many Hindus fast until midnight—the official birth time of Krishna. At midnight, those at the temple watch a priest pull apart curtains to reveal a fully dressed figure of Krishna.

Spanning the country of India, Krishna’s birthday is commemorated with regional variations. (Due to continuing COVID-19 pandemic restrictions, many events will be altered in different ways, this year.)

In Mumbai, Pune and in other regions, boys traditionally form human pyramids in hopes of having the highest boy break an earthen pot (called a handi) filled with buttermilk, which is tied to a string strung high above the streets. If the pot is broken, buttermilk spills over the group and the boys win prize money. Various groups of boys compete in Dahi Handi, in impersonation of a favorite pastime of the child Krishna: stealing butter.

In several regions, it has been announced that Dahi Handi events will resume this year, and political figures, wealthy individuals and even Bollywood actors often contribute to prize money for the Dahi Handi. In some regions of India, younger boys—typically the youngest male in a family—are dressed up like Lord Krishna. Hindus across Nepal, the U.S., the Caribbean and more revel in festivities for Krishna Janmashtami, offering fruit, flowers and coins to the deity and chanting together.