If you know someone from the Hindu tradition, perhaps at work or in your neighborhood, use this icebreaker: Do you celebrate Vasant Panchami? How does your family mark the occasion? 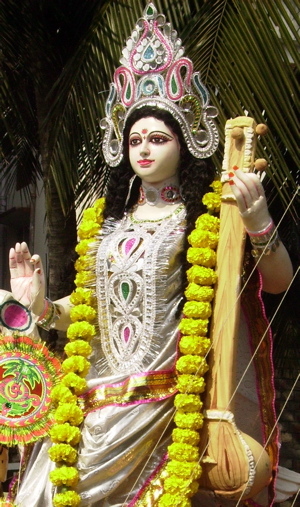 A statue of the goddess Saraswati. Photo courtesy of Wikimedia Commons

MONDAY, JANUARY 22: Welcome the approaching season of spring and don the color yellow, as Hindus and Sikhs in India and beyond celebrate the festival of Vasant Panchami (spellings vary).

For Sikhs, Vasant Panchami marks the day in Amritsar when musicians begin singing the Basant Raga, a practice that will continue until the first day of Vaisakh. In some regions of India, kites fill the sky, and the festival is better known as the Basant Festival of Kites.

A log with a figure of the demoness Holika is placed in a public area on Vasant Panchami, and for 40 days, devotees will add twigs and sticks to form an enormous pile. The pyre is lit on Holi eve (this year, March 1) at or after sunset.