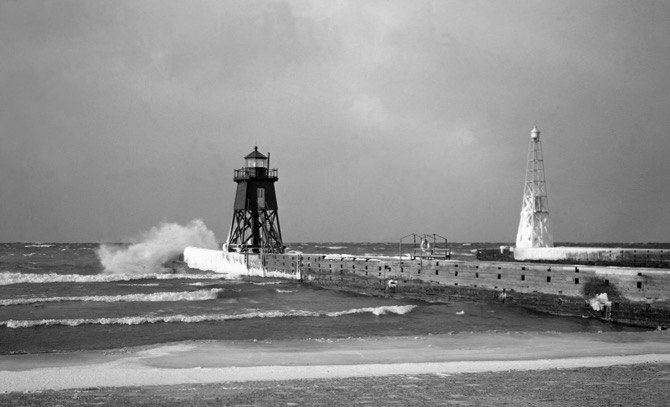 One of Bob Miles’ signature photos from Charlevoix.

One man’s passion for his small town in northern Michigan became his life’s work.  His son, who as a boy was indifferent to his dad’s efforts, grew up to revere him.

In 1957, a stranger purchased a farmhouse in Charlevoix.  In the attic he found a box of old photos.  They meant nothing to him, so he burned them.

Hearing of the incident, a local professional photographer realized history had been lost.  He felt called to intervene.  Receiving a gift of 350 old glass plate negatives of local scenes and people, Bob Miles printed some and mounted them on boards.  He persuaded downtown merchants to display them, along with a request for more photos.   His son Dave recalls, “Prints poured in like a tsunami.  Dad didn’t know what to do with all of them.”

Bob had moved to Charlevoix in 1913.  As a youth, he ran the projector for silent movies shown in his father’s nearby theater.  Later he worked for a local pharmacy where the owner shared  tales of the town’s past.   In 1929,  Bob gave up his plan to become a teacher and attended the NY Institute of Photography, arriving in time for the stock market crash.  He returned to Charlevoix; started his career in 1931; married a Charlevoix girl, Esther Goldstick, in 1935.

In the 1920s, Bob’s friends lived in a spacious house on Park Avenue.  In 1936, the house—now containing 3 apartments due to the Great Depression—came up for sale.  $5000.   Bob longed to buy it.  “Dad pestered Archie Livingston (head of a local bank) to lower the price,” Dave says.

“Archie said if Dad could come up with a $1000 down payment, he’d cut the price by $1000.  Dad called in his accounts receivable, got some off-the-books small loans and scrounged together the money. He and my mother presented Archie with an envelope holding $1000 in bills and coins.  They walked out of the bank with a house, a mortgage and 19 cents to their name.” 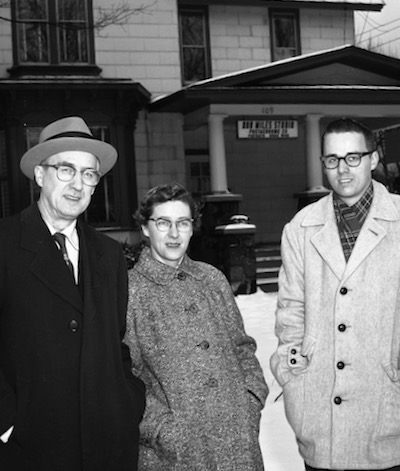 Bob and Esther Miles (with Dave at right) outside the home he used as The Bob Miles Studio in Charlevoix.

Bob and Esther moved into 109 Park a year later, after 2 renters’ leases ran out.  One renter remained—Minnie, a librarian.  “The whole town loved Minnie,” Dave says.  After Dave was born in 1940, Minnie became his “best friend forever.” Dave still lives there.

Bob amassed thousands of Charlevoix photos, including his own.

“Dad was so excited to get some of them,” Dave says.  “I couldn’t have cared less.  I know he was disappointed I didn’t pay attention.”  Dave grew up, graduated from the U of M, lived in Ann Arbor.  Returning to Charlevoix at age 31, Dave worked as night manager of The Lodge Motel.  It was THE place to stay In the 1960s.  Burton and I visited often.  (The Lodge was owned by a group headed by Julius Gilbert.  His wife Edith, the late grande dame of Charlevoix, was a dear friend.)

Inspired by the trove of images he’d collected, Bob started writing a book on Charlevoix’s history, using a newfangled IBM Selectric typewriter—a gift from his wife.  Bob began around 1968.  (He officially retired in 1972.)  In 1971, Bob finished the first of what would be 7 leather-bound volumes.

America’s bicentennial was approaching.  The Charlevoix Historical Society, of which Bob was a trustee, decided to publish a book based on Bob’s work to honor the occasion and raise money for a museum.  They planned to spend $18,000, charging $20 for pre-publication orders; $25 for the published book.  At the time, hard cover books cost under $10.  Dave says, “Dad wondered who the hell would pay that much for a book with such a limited audience.  He feared for the Society’s survival.”

Bob told the Society, “Take whatever you need.  I don’t want anything to do with the project.”

Meanwhile, a family house had been sold to the Society for $1 by a niece of Irene Harsha Young.  Irene, an artist, had married Earl Young, master builder in stone, creator of Charlevoix’s famed Mushroom Houses.  (Dave and Society president Denise Fate received an Emmy for their work on the recent documentary, “Earl Young, Wizard of Boulder Park.”)  In 1980, the proceeds from Bob’s book went to a wraparound addition to the 1892 Harsha House.

In 1981, Bob received an award from the Historical Society of Michigan.  Dave recalls, “My mother said Dad was so overcome he couldn’t speak.  She said it was one of the proudest moments of his life.”  Bob died 5 years later.

Today the Society has 20,000 digitized historical images.  And Dave, who once “couldn’t have cared less” about his father’s photo collection, has become Curator of Photos and Documents for the Society.  He, fellow Curator of Collections Trevor Dotson, and Society Patron/Guest Curator Ole Lingklyp of Ironton (5 miles south of Charlevoix) and NYC have spent countless hours putting together a new exhibit.  “150 Years of Photography” features 200 images by Charlevoix’ first 6 top photographers, climaxing with Bob Miles.  The show is a great glimpse into Charlevoix’s colorful past–from its days as a fishing, then lumbering village, through its horse drawn years of resort establishment, and soon to be booming tourism.   It concludes with the large industry years of nuclear and cement plants.

For Dave, the exhibit honors Bob Miles’ “lifetime of almost superhuman achievement.  Not only did my father take thousands of photos over about a third of Charlevoix’s existence, he was the sole reason its photographic history and heritage were saved for posterity.”

Assembling the exhibit, Dave says, “From the planning stages to the last caption on the wall, I could feel my father looking on and smiling,”  When cleaning up his father’s or others’ images on Photoshop, Dave recalled the light boxes Bob built to retouch negatives through a suspended magnifying glass.  Instead of just clicking a mouse to remove flaws, Bob used tiny brushes.  He moistened the tips in his mouth and drew them across shades of grey and black in circles on cards, then dabbed the color on a negative to fill in a gap or scratch. “He did it thousands of times.  The process almost ruined his eyesight.”

Your dad’s efforts, and yours, are a gift to Charlevoix.  Thanks, Dave, for carrying on the legacy.

(Note to readers: if you haven’t yet seen the show: GO.  Noon to 4, everyday but Sunday.)

The Charlevoix Historical Society has a sampling of its photo collection online. 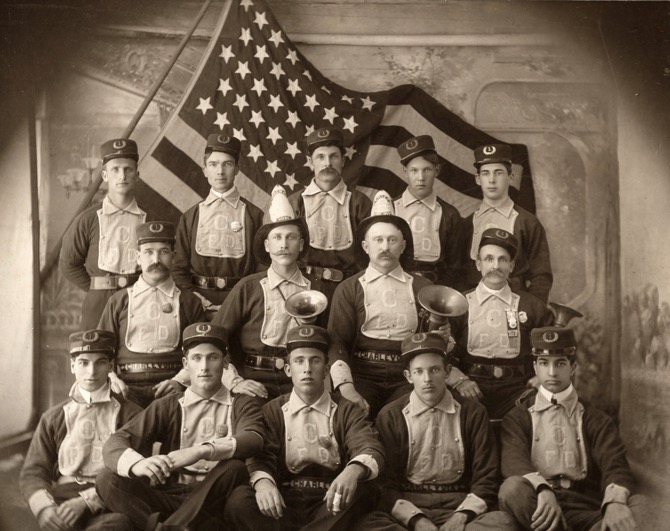 A photo by George Priest in the exhibition. 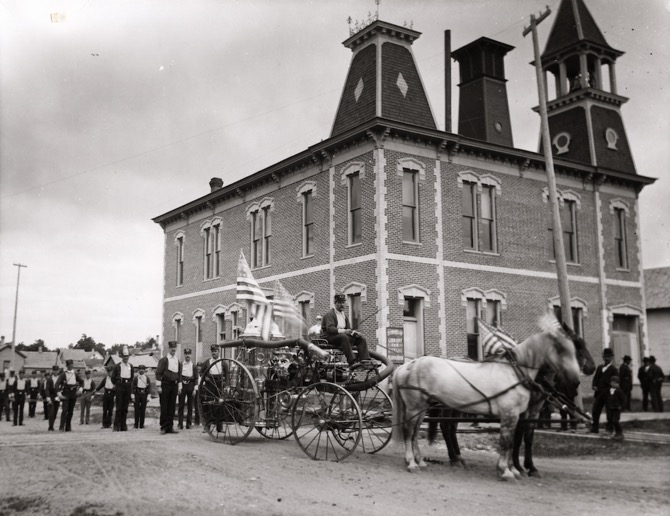 A photo by Ernest Peaslee in the exhibition.

8 thoughts on “More than a century of life in Charlevoix, Michigan, vividly preserved thanks to Bob Miles”