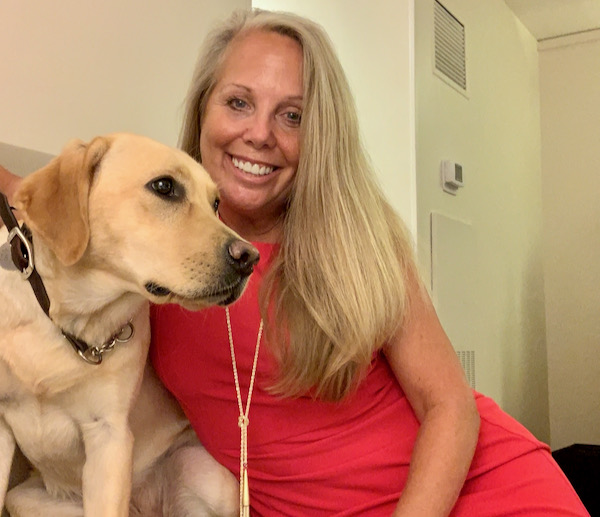 Wendy and her companion Lily.

Ableism:
Discrimination and social prejudice against people with disabilities
and/or people who are perceived to be disabled.

And by the way, she’s going blind.

Wendi, 57, who spends winters in Sarasota, says her compassion for others was honed in high school in Madison, WI.  There were two new girls in her class from Laos. “They looked frightened,” Wendi says.  She moved her chair between them and helped tutor them in ESL and literacy.  As the girls learned English, they shared their background.  “Cam and Ping made me understand what it means to lose everything,” Wendi says.  “Their parents sold all they owned to get their daughters on a boat that saved them from the ‘ethnic cleansing’ in Laos.  Their parents were killed soon after.”  Years later, Wendi and her mom visited a restaurant where Cam and Ping worked.  They told Wendi’s mother they wouldn’t have come to school if Wendi hadn’t welcomed them every day with a smile.

“That made me realize I could make a difference.  I didn’t want to be a me-ist.”

In her 30s, Wendi and her husband at the time were asked to foster and then adopt Grace. They already had three biological sons, ages 5, 8 and 16. Today, 21 years later, daughter Grace is an accomplished jazz vocalist.  Riley, the youngest son, is a photographer and skateboarder in LA.  Teigan is an epidemiologist in Brooklyn; Tyler, a successful businessman in Tampa.

Wendi raised her children as a “tough but loving mother.”  As her children grew older, Wendi became freer to focus on the world.  She continued to help refugees.  An art teacher, she directed a community art project to introduce newly arrived refugees into the community.

At church Wendi met the director of a Kenya Children’s Fund.  She asked for Wendi’s help with the kids she served in the Dandora slum of Nairobi, Kenya.  Wendi created a lesson plan.  To Wendi’s surprise, the director said she was hoping Wendi would lead the community art project at the school.  So off Wendi went to Nairobi.  Since the school was located in what was deemed a garbage dump, the government provided no funding.

“I fell in love with the students and teachers at the school,” she says.

When Wendi got home to Chicago, her friend happened to be picking up a refugee family from South Sudan.  Two families showed up at the airport.  The friend called Wendi.  What to do with the second family?

“Just bring them to our house,” Wendi said.

A mom and dad and two “frightened” kids arrived at Wendi’s suburban home.  The boys, around 4 and 6, wore men’s shoes that were falling off their feet.  The boys’ names: Bill Clinton Kwandi and Nelson Mandela Kwandi.

Wendi’s then husband Tim, who was out golfing, called home.

“Bill Clinton and Nelson Mandela are running around barefoot in our yard,” Wendi said.

Wendi took the boys to Walmart.  The security guard said they couldn’t enter without shoes.  Wendi explained.  The guard walked them over to the shoe department and delighted in helping them pick out their first pair of shoes.

Bill Clinton’s and Nelson Mandela’s mom Lucy became a close friend.  Lucy and her husband Bulus were regulars at the Dwyers’ dinner table.  One Sunday evening they brought along their friend Arkangelo.  After dinner, Arkangelo left a tattered bill of Ethiopian money on the table.  Wendi returned the money.  “You’re a guest,” she said.  Arkangelo asked if he could be part of Wendi’s family like the Wandis.

Arkangelo, then 23, was one of the Lost Boys of Sudan, a group of 20,000 children who were displaced or orphaned during the genocide carried out by the government in Khartoum after oil was discovered in the southern region of Sudan.  Boys ages 5-11 walked 1000 miles to safety in Ethiopia.  Some were resettled through programs in the U.S.   Arkelango became another informal part of Wendi’s family.  He and Wendi spoke to dozens of high schools about the conflict and how education helps promote peace.

South Sudan is the “most dangerous place on earth,” Wendi says.  Fighting among rival tribes continues to this day.  In most of South Sudan, there’s no running water or electricity and only one doctor for every 100,000 people.

At the urging of Arkangelo and other Lost Boys, Wendi helped raise money to build a school.  In 2009, when the school was almost finished, Wendi visited to check the construction progress.  She observed South Sudanese women carrying empty cans, having walked three miles to fill them with water.  They waited in line at the well for up to three hours, then walked three miles home lugging 40 lb. jugs on their heads.  Discovering only ten percent of South Sudanese women could read or write, Wendi asked the women if they’d like to learn while waiting at the well.  Through an interpreter, Wendi found they were eager to do so.  Returning to the US, Wendi began raising money to pay for teacher training and salaries and started Literacy at the Well.  The program still continues.  Wendi now speaks at universities, in Washington, D.C., at the UN in NY and UNESCO in Paris to raise awareness and support for the female learners in South Sudan.

“I was an unlikely candidate to connect so strongly with South Sudan,” Wendi says.  “I was someone who skied at Tahoe every winter and lived in a big suburban home.  You never know what will take hold of your heart.” 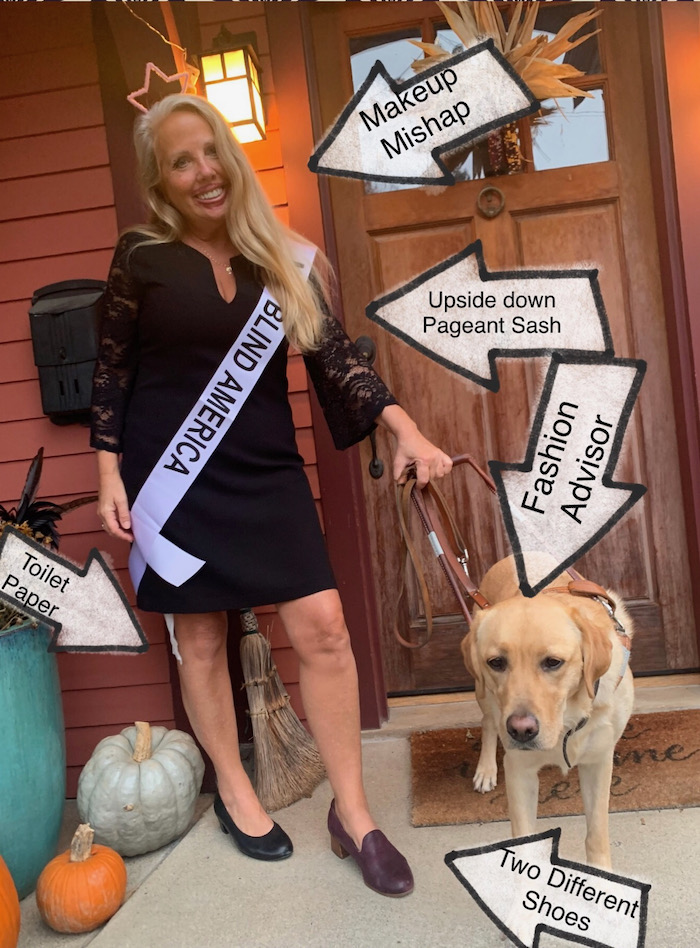 Wendi has a real sense of humor! For Halloween, she designed a costume. She says, “All these things have happened, except the pageant sash, so I thought I may as well put them all in one Halloween costume.”

While Wendi was working to help women in South Sudan, her eyesight started to diminish.  She was going blind from Retinitis Pigmentosa.

Receiving such a tough diagnosis, she decided to take the family Airstream and go camping on her own for a week.  “I didn’t want to fall apart in front of my kids.”  She went to Bridgeman, MI, and camped on the sand dunes.  She made a list of everything she’d miss, including the chance to someday see her grandkids’ faces.  The concession building on the beach happened to have a Lions Club brochure featuring a “really cute” guide dog from Leader Dogs for the Blind.  “I’d never have guessed that seven years later that organization would make a profound difference in my life.”

“I thanked God for saving me from a nervous breakdown.  I just decided not to give up.  The inspiration I got from my refugee friends gave me the strength to go on. I’m a storyteller and a fundraiser who’s committed to positive change.  I could still be that person.  My life’s work now has become decreasing the stigma of blindness and other disabilities caused by ableist attitudes.”

Wendi says currently only 10% of legally blind people use a white cane or a sight dog to go places on their own.  When you use these aids, she says, you gain independence but you make your blindness known to others.  “For me, coming out with my blindness gave me my life back.”  At first Wendi was “embarrassed” to be going blind.  “Not anymore,” she says.  “My goal now is to help others with low or no vision remain independent.”  She’s dedicated to combatting ableism and to improving the safety and accessibility of environments.  She notes the two busiest intersections in Sarasota lack audible crosswalks (which announce when it’s safe to cross).

Wendi was a director of corporate sponsorships with PBS Wisconsin when Leader Dogs for the Blind recruited her.  “I already had a guide dog, and I knew how that changed my life.”  Though unable to drive for the past 13 years, Wendi still leads a “vibrant” life.  She lives downtown, close to shops and services.  Her guide dog, Lily, is small and fast—too fast for most people which almost got her removed from the program.  But Wendi’s a girl on the move and fast is how she rolls.  Lily’s pace is perfect.  Many years before, when Wendi welcomed the Wandi family from South Sudan into her home, they honored her months later by having her name their baby.  Wendi chose the name Lily.  Wendi’s yellow lab guide dog came with the name Lily—a Godsign Wendi sees as bashert (Yiddish for meant to be).

Meanwhile, Wendi works, writes, hangs out with family and friends and dates “as a hobby.”  She says she’s “studying manthropology.”

There are very few Orientation & Mobility ability (white cane) trainers in the US, Wendi says.  Leader Dogs is 100% supported by philanthropy.  Guide dogs are provided to clients at no cost.  However, the cost for Leader Dogs to breed, raise and train each guide dog and train the client is $50k.

“I’m so grateful to the donors, trainers and volunteers who helped bring Lily into my life.  She reduces the 4 Ds of my sight loss: danger, dependency, discouragement and depression.  She’s  given me my life back.”

Wendi misses riding her bike.  She wants tandem bikes to become readily available so sighted people can ride tandem with riders who can no longer bike independently.

Social psychologist Carol Tavris writes, “…resilient individuals have a ‘flexibility mindset,’ consisting of optimism, confidence in their ability to cope, and a ‘challenge orientation’– the conviction that they will be able to treat the traumatic event as a challenge to be overcome rather than a disaster that will defeat them.”

Courageous in the face of challenge, Wendi chooses to remain grateful.  Grateful for her “super family and wonderful friends.”  And for her Christian faith.

When she began losing her sight, she says, “I asked God to be my handrail.  I believed then and still do that God is with me in the struggle.”

Thanks, Wendi, for all you’re doing for low sighted people, for Sarasota, and for humanity.  And for sharing your courage, determination and faith with Godsigns readers.  May God remain your handrail, now and always.