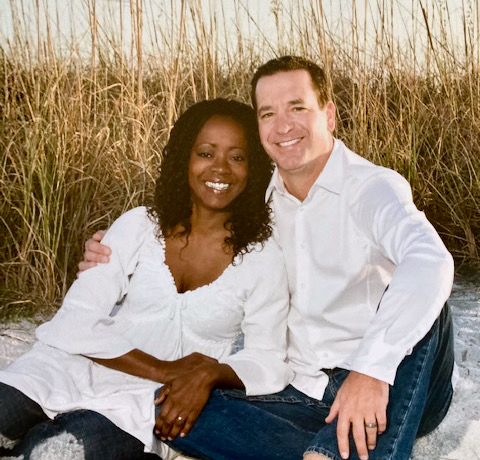 Dino with his wife Dee.

Attending a memorial service, I was intrigued by the engaging clergyman who conducted the service.  I caught up with him in the parking lot.

Pastor Dino Silvestrini, 65, grew up in a rural Catholic parish and “felt a vocational call” in second grade.  ”I’m not sure what compelled me,” he says.  He attended mass at 7:30 every morning.  A pastor noticed his regular attendance and asked him and another student to meet him in the sacristy.  “I thought we were in trouble,” he recalls.

Quite the contrary.  The pastor invited him to become an altar server.  Dino lived near the church and began serving at weddings, funerals and holy hours.  By high school graduation, he says, “I was sure I wanted to be a Catholic priest.”

In 1984, Dino was ordained.  For over 25 years, he served as a Catholic priest.  As time went on, “I didn’t feel challenged to the extent I’d hoped.  Being in the priesthood was meaningful but lonely.  I’d spent eight years training for the priesthood, but after my staff left at 4pm, the walls began to cave in on me.  I felt attracted to women and didn’t want to spend the rest of my life by myself.   It was a confusing time.  I fought my feelings for years, but finally realized I could reinvent myself as a chaplain.  Same circus, different tent.”

As a chaplain, Dino, performs many of the same rituals.  He counsels people, visits patients in hospitals, performs burials and preaches sermons.  Having undergone an official process of laicization, he no longer celebrates Mass or administers Catholic sacraments.

Dino officiated at a memorial service for Faith Storm Graves, the105 year old mother of my good Florida friend Phyllis Keyser. Faith and her husband, Ellis Lee Graves, were missionaries in Brazil.  Ellis died in 2015.  At the time, Phyllis found a coin etched with the numbers from John 3:16, the beloved Bible verse that promises eternal life for Christian believers.  The discovery comforted Phyllis who still treasures the coin. (See my 2015 column, “Beloved Presbyterian minister lives well, loves well, and leaves well.”)

Faith, a longtime breast cancer survivor, outlived Ellis by several years.  She demonstrated the spunk daughter Phyllis inherited.  Each year, Faith reported on how she was faring.

100: “Please bow; I’m 100 now.”  Phyllis decided that occasion merited a parade.   She decorated a golf cart from the home to resemble a carriage.  Phyllis’s son played the horse.  Faith wore a tiara and a cape.  A red carpet lined the parade route which was populated with residents from Westminster, Faith’s continuing care retirement community in St. Pete, FL.

Pastor  Dino sent her off with a lovely eulogy.

Service to others has been a hallmark of Dino Silvestrini’s life.  An athlete, he grew up in Iron River, MI, a town of under 3,000 in the U.P., and coached JV basketball at a Catholic school in nearby Marinette, WI.  As Pastor of St. Rita’s in Trenary, MI, his assignment was affiliated with St. Therese, in Au Train.  The small mission church was in danger of closing.  To support St. Therese, Dino came up with a fundraiser and ran 23 miles from from Trenary to Au Train.  Sponsorships produced $14,000 for St. Therese.

In 2010, a month after leaving the priesthood, Dino moved with his mother to Florida.  Out to dinner with a friend, he noticed a woman on the dance floor, introduced himself and called her the next day.  He and Dee have been married for 11 years.  At the time, Dino thought his clerical career was over.  He began applying for civil jobs; he was a groundskeeper for the Baltimore Orioles and a teacher’s aide.  His perceptive wife suggested he was “wasting” his time and should resume his pastoral duties.  So encouraged, Dino became a chaplain for Suncoast Hospice in St. Pete and was later hired as chaplain for Westminster.

His favorite part of the job?  “Sharing in the joy of peak moments like baptisms and weddings.”  The toughest? “Helping people cope with death.  I try to offer solace, encouragement and guidance.  It’s a privilege to share in a person’s faith life.”

His thoughts about the celibacy requirement for Catholic priests?  “Many Catholics forget celibacy wasn’t imposed on priests until the 12th century.”  Before that, he explains, when a married priest died, the church property reverted to his wife.  He says the Pope mainly introduced celibacy to protect property rights.  In recent years, a shortage of priests has led to more discussions about dropping the requirement, he says. “But I don’t see things changing any time soon.”

Regarding pedophilia scandals in the Catholic Church that broke in the early 90s, he says, “The hardest part was all of us were tarred and feathered for the sins of a few.  To wear my clerical collar in public at that time was not a pleasant experience.”

Wife Dee’s a real estate broker.  When possible, Pastor Dino joins her in conducting open houses to make sure she’s safe.  These days, this one-time altar boy is on the job by 6am and “excited” to come to work. He’s a happily married and happy man.

3 thoughts on “An ex-Catholic priest, Floridian Dino Silvestrini is now a married pastor”