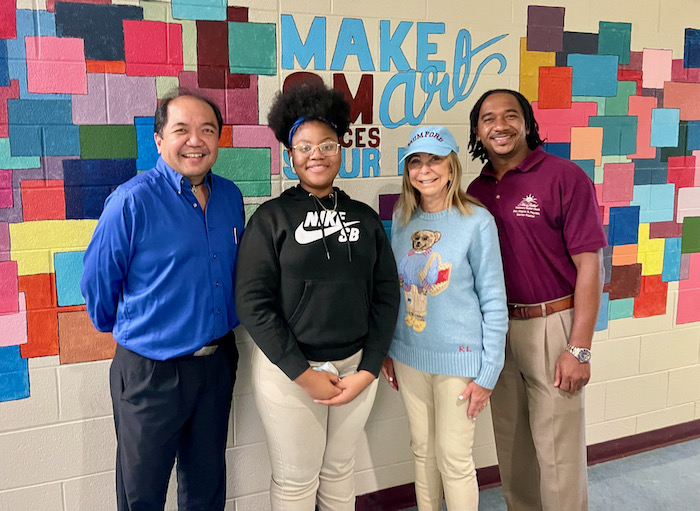 I love how the universe, or God, or Source or whatever you call it presents astonishing coincidences when we’re open to them.  BFF Brenda Rosenberg and her new friend Keyon recently had such an experience.

Brenda knows what it feels like to be shot down in her efforts to create peace among people of different faiths and backgrounds. Ever hopeful, when one approach doesn’t work, she tries another. Having once managed fashion apparel for 900 Federated department stores, in the last 20 years Brenda’s turned her formidable focus on a thornier problem. With partner Samia Bahsoun, an American citizen born in Senegal, Africa, of Lebanese descent, they’ve created and presented programs around the US.  And in spots as far flung as Haifa U. in Israel and as guests of King Abdullah in Jordan.

Brenda describes her peacemaking work as fostering “relational equity.”  She’s lately teamed up with the Rev. Keyon S. Payton, lead pastor of Pontiac, MI’s New Bethel Missionary Baptist Church.  They hope to create an Institute for Trauma and Economic Justice (ITEJ). Keyon, with degrees from Morehouse, Princeton and more, is working on his doctoral studies.

He recently came to the Detroit Institute of Arts to support Brenda at a signing of her new book, Charmed. That visit—Keyon’s first to the DIA—sparked a series of Godsigns. 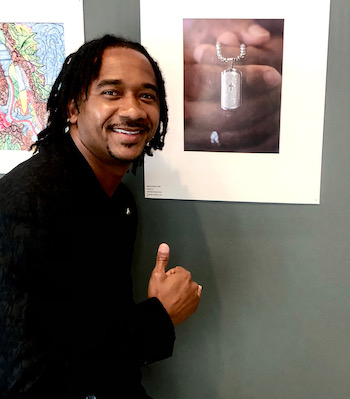 Nature called.  Keyon asked a security guard for directions to the loo.  Unsure whether the closer restroom was open, the guard sent him to a farther one.  Keyon took a couple of wrong turns, eventually finding the loo on the other side of the DIA.  On his way back he noticed a display of photos by Detroit students.  He walked up to them.  In the middle of the grouping, he spotted a photo of a hand holding a silver medallion inscribed with the Lord’s Prayer. Studying the photo, Keyon realized the hand was his own. The photo was borrowed from a mailer Keyon produced for Michigan United, a group promoting justice for underserved communities.

Keyon’s a friend of Rufino Lim, an art teacher at Detroit’s Mumford High School. “Mr. Lim”  focuses on photography. The image Keyon discovered was submitted by Davona Boyd, a teenage student of Mr. Lim. Keyon told Brenda about the photo he’d come across after making a couple of wrong turns. Seeing the picture, Brenda concluded, “Two wrong turns made a right turn.”

In the description accompanying the photo, Brenda learned Davona was a student at Detroit’s Mumford High School.

Several decades ago, Brenda herself was a student at Mumford.  Her drawing of a dragon had won first place in an art contest and been exhibited at the DIA.  That honor, Brenda says, “empowered me to see myself as an artist.”  Brenda became an accomplished photographer, as readers of her new book Charmed will attest.

Brenda and Keyon visited Mumford and met Davona Boyd, a bubbly senior.  Visiting Mumford had yet another benefit for Brenda.  She’s been producing stunning wallpaper panels from photos she’s shot around the world.  In Nevada, horseback riding with husband Howard, Brenda had taken a photo of wild mustangs racing through valleys and over mountains.   The Mustang is the mascot for all Mumford sports teams.  Brenda’s mural of mustangs will soon enhance the lobby of her alma mater.  It will be installed the last week of July by the Detroit Wallpaper Company.

Brenda’s determination has amazed me for more than 50 years.  Godsigns readers have met Brenda before.  Keyon’s story is equally amazing.  Stay tuned.  Your ECC (ever curious columnist) has another humdinger in store.