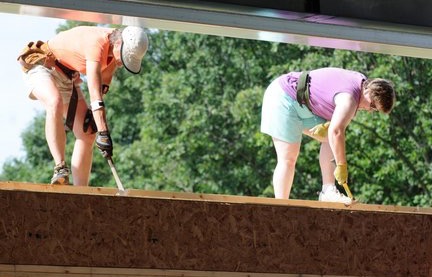 You can’t see her Karen’s face in this photo, because she was too busy working when news photographer Mark Murray visited this construction site in 2010. At the time, she was all the way across the country in Massachusetts helping to rebuild an African-American church that was torched in a hate crime. Wherever she goes, Karen likes to work with a wide diversity of other volunteers. Her co-worker, at right in this photo, was the Rev. Hillary Chrisley, a United Methodist who also came from Santa Barbara.

“When something terrible happens, I’m not the kind of person to sit around,” Karen Schloss Heimberg says.  In 2001, watching the collapse of the Twin Towers, she switched off her TV and drove to a blood bank. In 2010, when three men torched a black church in rural Massachusetts, she traveled across the U.S. with others from Santa Barbara, CA, to volunteer for the work crew.

Karen and husband Richard run a construction company in Santa Barbara.  With the recent mudslide following the Thomas fire, the largest wildfire in California history, the Heimbergs were evacuated from their Montecito home.  They’ve been staying in a hotel.

Scott had spoken to a friend of a first responder.  The fireman said he and his colleagues had been getting plenty to eat.  But all carbs.

“These guys stay in top shape,” Scott said.  “I want to take them some fruits and vegetables.”

“I’m going with you,” Karen said.  A couple of hours later, they’d spent $1700 at Costco.  They dropped  off the produce with a band of firefighters who were “so appreciative.”

At first, Karen thought she’d continue to nourish the fire fighters.  She soon realized they were “inundated” with support.  Who else, she wondered, could use help?

She heard the Water District had a lot of “stressed” people working in the field to locate and fix water and power pipelines.  She learned the Sanitation District was working around the clock checking manholes and pipes, digging trenches.  Problems needed fixing before gas could be turned back on and toilets flush and residents return to their homes.

Karen had found a need.  A way to help. She put the word out.  Friends and strangers volunteered.  Karen developed a spread sheet of people willing to donate money, cook meals, shop for foods.  Her ad hoc group is now supplying healthy produce to about 70 workers in the water department and 20 sanitation workers.

She says, “I’m overwhelmed by the generosity of people willing to write a check to little old me.”

Wherever Karen see groups of workers, she stops to see if they’d like healthy produce.  The day we spoke she’d visited the LA county sheriffs’ department to say thanks and drop off carrots and tangerines for “people who are protecting our space.” 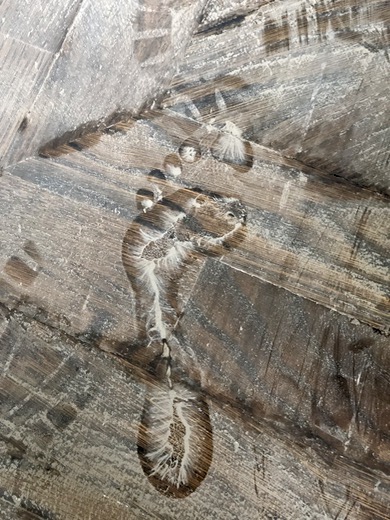 What a mess! That’s Anne’s footprint on the muddy floor as she slipped and slid to safety recently.

I learned about Karen from my sister, Anne, who visited me last week.   Anne has 2 homes in Montecito.  She’s trying to sell the one she shared with husband, Michael Towbes, who died last spring.  She moved into a smaller home in a gated community.  But gates have no respect for mud.  Anne woke up the morning after the rains and slid out of bed.  She evacuated by helicopter with little more than a nightgown and a pair of jeans.

Anne received an email from Karen.  It began: “Dear Friends, Thank you so very much for stepping up to help us help those who are helping us!  I would like to tell you what we are doing so you can feel assured that your confidence in me is well placed.”

The message details what Karen and friends are doing to provide healthy lunches to first responders.  I especially liked this part: “Today our dear friend (and plumber, Pacific Plumbing) made the most amazing vegetable barley soup, raw veggies and dip and loaves of French bread.  The soup smelled divine and was scarfed up.  They loved it and couldn’t stop thanking me.”  Karen mentions the Berry Man, who has been donating fresh fruits and vegetables.  He’s been doing this gratis, she says, “but that can’t be sustainable for his business, and he knows we are ready to chip in.“

Karen asks donors to include a card signed with their names, “so the guys know it comes from our community with love.” 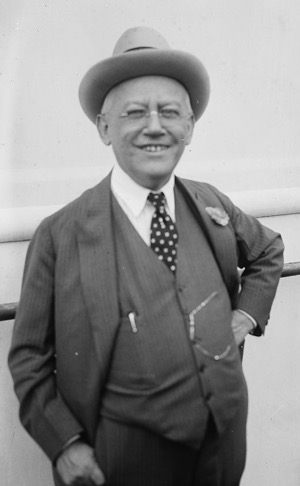 Carl Laemmle (senior) was never afraid of a challenge, especially when it came to human rights. He disagreed with Edison’s early monopoly on American movies and went toe to toe with him to open up movie production for himself and other producers. When Nazi power was looming over Jewish communities, he personally saved 100s from the deadly threat.

“My father was a refugee from Nazi Germany.  He didn’t talk about it much but he did say one man saved his life.”  That man was Carl Laemmle, who sponsored the immigration of hundreds of families from southwest Germany, where her father lived.

EDITOR’S NOTE—It’s worth digressing a moment to honor this righteous soul. If you’re a classic movie buff, you will recognize the famous surname Laemmle but might not recall that there were two of them—and father and son both were movie pioneers. The senior Carl (1867-1939) was famous for taking on Thomas Edison’s early monopoly on silent films, a bare-knuckle fight between business titans in that era. The senior also worked with early stars, including Lon Cheney Sr. Then, Carl’s son, Carl Junior, was responsible for movies that regularly show up on TCM and other cable channels to this day. Carl Junior’s long list of great films includes the world-famous Universal monster series with Dracula, Frankenstein and the Mummy—a series that included Lon Cheney Jr.

When Karen’s dad died, she “took it hard.”  She wanted to “pay it forward.”  She decided to find and help sponsor a Syrian family to immigrate to North America.  She heard about a family moving to Toronto and spoke to Rabbi Arthur Gross Schafer about it.  He told her, “If you do it alone, you help one family. If you do it in a group, you teach others.”  She and Richard flew to Toronto to meet the family.  Along with two members of a Jewish temple in Toronto, they’ve been helping the family get counseling services and jobs, supporting them emotionally and financially for a year.

Karen’s efforts offer a glimpse into the grassroots way California neighbors have stepped up.   A silent auction raised money for  the Corey family, whose home was swept away.  Morgan, 25, and daughter Sawyer, 12, perished.  Twin sisters Summer and Carrie are in critical condition, recovering at the hospital.  A nightclub held an 8-hour benefit concert to raise funds for victims lacking insurance for their losses.  The Carlyle Salon will host a Day of Love, Feb. 5, offering free services for survivors.  Massage therapist Steve Shepard is giving free massages to displaced Montecito residents and first responders.  In Carpenteria, someone put  sunflower bouquets in front of their home for passersby to take for a suggested donation.

Anne’s working with a large group of volunteers on the Kick Ash Bash.  (Great name.)  On Feb. 25, this party is billed as “A Celebration of First Responders.”  Entertainers Kenny Loggins, Glen Phillips and Eric Burdon (of The Animals) and many more will donate their talents.  The Kick Ash Bash aims to raise $2 million to help finance firefighting and rescue equipment and help families of first responders.

The list goes on.  Neighbors helping neighbors. In some cases, neighbors with paws.  Anne told me about a local vet, Dr. Dave Dawson.  Unable to drive to his branch clinic in Montecito to rescue 3 cats, he rode his bike there and rode out with a feline filled backpack.

Nice to hear about people who don’t wait for the government to help them out.  They roll up their sleeves and do what needs doing.  Hopefully it won’t be too long before my sister and others can go home again and Montecito returns to the paradise it’s been.