This photo is from Dan Harris’s conversation with the Dalai Lama and one of his friends. I’ve got links to watch this video and another one by Dan Harris, below.

At the start of the pandemic, I developed a new hero.  He doesn’t see himself as a hero.  Most often he refers to himself as a jerk.  But a recovering jerk. 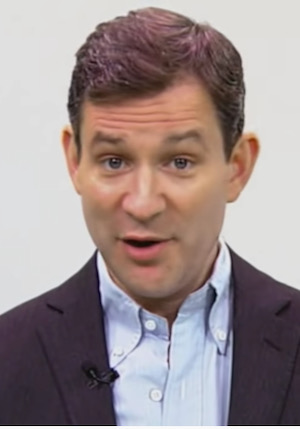 My hero, Dan Harris, has been an anchorman with ABC—and a meditator. Now, he’s leaving ABC. (Here’s a Good Housekeeping story about his decision to leave the network.) He’s going to spending more time working on promoting and teaching about forms of meditation.

I welcome that—and I’m pretty sure a lot of his regular listeners will, too.

Dan accompanies me to and from the golf course most non-rainy mornings in Northern Michigan. On his podcast, Dan interviews meditation instructors and practitioners. He’s a good listener with an almost 100% record of tracking well and asking what I want to know.

I’m a late in life meditator.  I began the practice at the start of the pandemic.  I stink at it.  (A less ladylike verb comes to mind.)  But I keep trying.

Harris writes about his journey to meditation in a memoir, 10% Happier: How I tamed the Voice in my Head, Reduced Stress Without Losing My Edge, and Found Self-Help That Actually Works.  He discusses  how meditation helped him kick a drug and alcohol addiction and become less anxious.

On his podcast, Dan interviews famous meditators like the Dali Lama, less famous meditation instructors like Sharon Salzberg and diverse devotees such as fashion designer Eileen Fisher and celebrity chef Eric Ripert.  Dan interviews them about their lives and their practice.  Eileen Fisher says she incorporates meditation into the daily running of her company.  Ripert, owner of NY’s lauded Le Bernardin, says since becoming a Buddhist, he’s no longer a plate smashing tyrant.

A basic principle of meditation is finding an approach that works for you and committing to it on a regular basis.  I decided 15 minutes a day was manageable.  I set my iPhone timer and try to focus on my breathing, first thing in the morning, before a million excuses commandeer my attention.  Some version of sitting is recommended.  It doesn’t work for me.  I’m a feet up kind of girl.  I prop up two pillows and lean against them in bed.

I silently count to 100, then back again.  Sometimes I’m so distracted I don’t get past the counting.  As one of Dan’s guests advised, when distracted, “Simply begin again.”  I then perform a breathing exercise.  Another guest, Emma Seppala, Ph.D,, author of The Happiness Track, says breath work is scientifically shown to benefit your heart rate and blood pressure. Following Emma’s advice, I breathe in for a count of five and breathe out through gently closed lips for ten.

Guided meditations are helpful for most.  There are terrific ones available on the internet, including on the 10% Happier app.  Our son David’s website, Carbon Media, offers soothing guided meditations for nature lovers on Carbon Unwind.

If directions have more than one step, I glaze over.  For me, guided meditations feel contrived.  I’m better off doing my own unconventional thing.

As he was typing his manuscript, Dan says, he’d been meditating for nine years.  “I am still capable of being neurotic, ambitious, and cranky,” he writes.  “Which is why I like my whole 10% shtick; it sets the bar pretty low.  That said, I am significantly happier and nicer than I used to be.”

Dan calls himself a meditation skeptic.  He doesn’t understand why meditation works.  He just knows it does.  I’d agree.  The stress and uncertainty in Burton’s and my lives following my husband’s stroke can be overwhelming.  With my innate talent for catastrophizing, I need all the support I can get.  Meditation helps me stay present.

If something’s troubling you, dear reader, (these days, who isn’t troubled?) give meditation a try.  It won’t hurt and just might help.

And, Dan? Thanks! I wish you all the best as you move from your desk at ABC into this “whole 10% shtick.”

Trust me: It’s a whole lot more than shtick.

FIRST, get the podcast. You can find out more about the TEN PERCENT HAPPIER PODCAST right here.

SECOND, here is the full interview Dan did with the Dalai Lama, and a mutual friend, back in 2017:

FINALLY, here is a Google Talk Dan Harris did about his whole approach to 10 Percent Happier.

One thought on “Like many of us, ABC newsman Dan Harris went from skepticism (and anxiety) to a love of meditation”