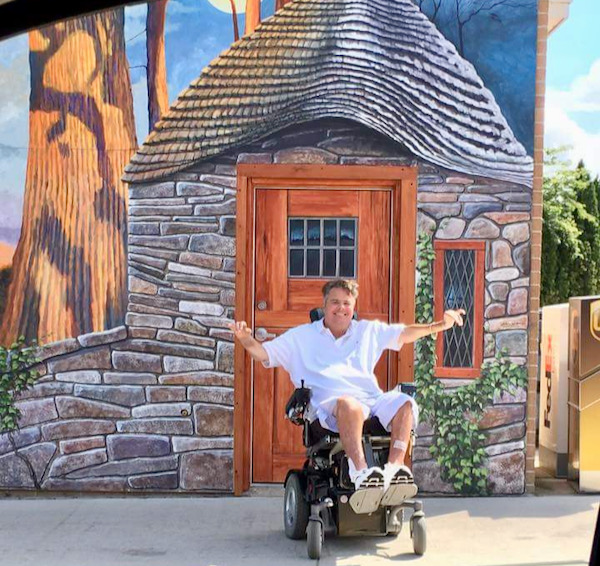 Stevie Schaefer joked that he just might start flying as he posed in front of a panel in a magical mural in downtown Charlevoix. (If you would like to see more of this mural, click on this photo to read an mLive story about the mural with 12 photos of the entire breadth of the piece.)

Thanks especially to his mother Patty Runquist—

Not even a tragic boating accident kept Stevie from enjoying life 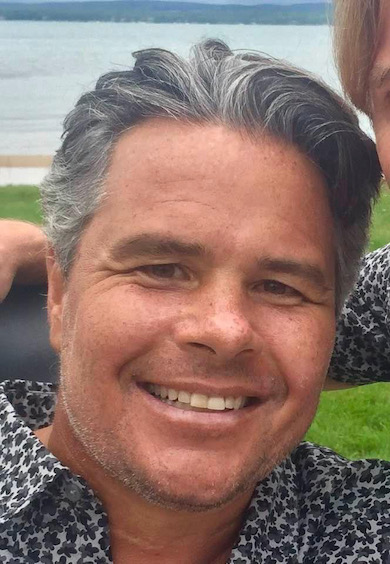 Stevie Schaefer never met a stranger.  He was a good looking, fun loving, high school grad who played football, tennis and baseball.  He washed dishes, cooked and served at popular NoMI restaurants Grey Gables and the Weathervane and tended horses on a farm.  His future seemed as bright as the sun shining on Lake Charlevoix where he’d water skied for over ten years.  But instead of attending Central Michigan for college, as he planned, he spent the last of his 17th year and the rest of his life in and out of hospitals.

Even that didn’t stop him.

In July, 1985, Stevie visited a friend at Crystal Lake in Mount Pleasant, MI.  Stevie and some pals went for a ride on a pontoon boat.  As the pontoon returned to the dock, Stevie spotted several boats tied there and overestimated the water’s depth.  He dove in headfirst as he’d done in other lakes for years.  This time he didn’t come up.  Stevie was a known prankster.  His buddies thought he was fooling around.

After several minutes, Stevie’s limp body rose to the surface.  He floated face down, having broken his neck and drowned.

Stevie’s friends called an ambulance.  Stevie’s lungs were pumped out.  He was rushed to the hospital.  A  device was screwed into his skull to immobilize his neck.  He was transferred to a hospital in Lansing.

That’s when he called his mom.

Stevie’s mother, Patty Runquist, is my summertime friend.  Patty, mutual pal Lynne Kukes and I play golf many mornings.  Patty’s one of the most unflappable people I know.  Whether she nails a 10’ putt or misses a 2-footer, she stays calm.

Patty raced to Lansing.  Over and over, she reassured her youngest son, “We’ll get through this.”   Patty remembers Stevie’s hands being cold.  She rubbed them all night long.   She remembers the doctor who uttered the term “quadriplegic.”

The accident took place two days before Stevie’s 18th birthday.  Because he was immobilized and could only look up, Patty taped dozens of birthday and get well cards to the ceiling.  The doctor walked in and said, “Don’t tell me it’s your birthday.”

Then a part time dental hygienist, Patty uprooted her life to help her youngest son.  After a month, Stevie moved to the Craig rehab facility in Denver.   Stevie’s three siblings were in college.  Patty rented an apartment across the street from Craig.  Mother and son stayed in Denver for four months.  Staff at Craig termed Stevie a “super quad,” meaning he had more capability than a typical quadriplegic.

For the first month, the Halo screwed to Stevie’s skull immobilized his neck.  Every hour Patty tipped her son back in his chair to prevent pressure sores.   Stevie’s young male roommate in Denver was on a ventilator after a body surfing accident.  He couldn’t move his arms.  Compared to his roommate, Patty says, “Stevie felt lucky.  He could move his arms.”

While Stevie was in Denver, his nurses noticed all the cards and calls he received.  One nurse told Patty, “That’s the kind of friend Stevie must have been to them.”

At Craig, Patty recalls, she met a young patient whose mother and grandmother lived together in a  Victorian house.  They refused to “spoil” the exterior of their home with a ramp.  They sent the young man to a nursing home for the rest of his life.  Patty says, “Hearing that made me realize how I didn’t want to be.”

For a long time, Patty says, Stevie was “hopeful he’d walk again someday.”  Though that someday never came, Stevie was good humored about his dependence on others.  His friends remained devoted, picking him up and taking him to parties.  He learned to drive with hand controls worked by flexing his wrists.  He paid road tolls with Solo cups he’d pre-loaded with change.

Patty helped Stevie with his bowel complications.  Lynne and I marveled at how upbeat our friend remained, often leaving the golf course early to assist Stevie with functions most mothers leave behind once children are grown.

Stevie’s family called him a “wise ass.”  He liked hats depicting a horse or duck or rabbit head.  He sent  “goofy” presents to relatives and friends, including a flatulating stuffed monkey and a bank shaped like buttocks.  (You can guess where the coins were inserted.)  One Christmas Stevie bought the family  Santa costumes so they could bounce around in them entertaining kids at the hospital.  He attended all his nieces and nephews’ graduations and gifted them a pontoon boat.

Stevie laughed at his occasional incompetence.  His adapted van ran into a Burger King one day when he lost control of the tripod steering wheel.  The family thought it hilarious and never let him forget it.

During stressful times, Patty says, “When I got discouraged, I’d just take a deep breath and keep going.  It’s better to laugh than to cry.  When it’s your son, you do everything you can to make his life easier.”

Stevie died last December of complications resulting from three surgeries for a bleeding ulcer.  He was 55.  Friends from around the country came to his memorial.  Some 200 mourners gathered at Charlevoix’s Grey Gables Restaurant where Stevie once worked.  Giving Stevie’s eulogy, his nephew  Andrew Gasior said, “While most people in Stevie’s situation would feel sorry for themselves and allow their disability to be their defining characteristic, Stevie did just the opposite.  He made a Christmas gift the year’s most anticipated reveal.  He could tear up a dance floor without lifting a single foot.  Above all, he was a fighter.  He fought until his very last breath.”

Stevie’s big brother Rick Schaefer wrote a song for him and found a young woman in his church choir to record it.  He illustrated the song with family photos and published it on You Tube.  As a mother of two and grandmother of seven, I have yet to watch “The Prince of Charlevoix” without crying. 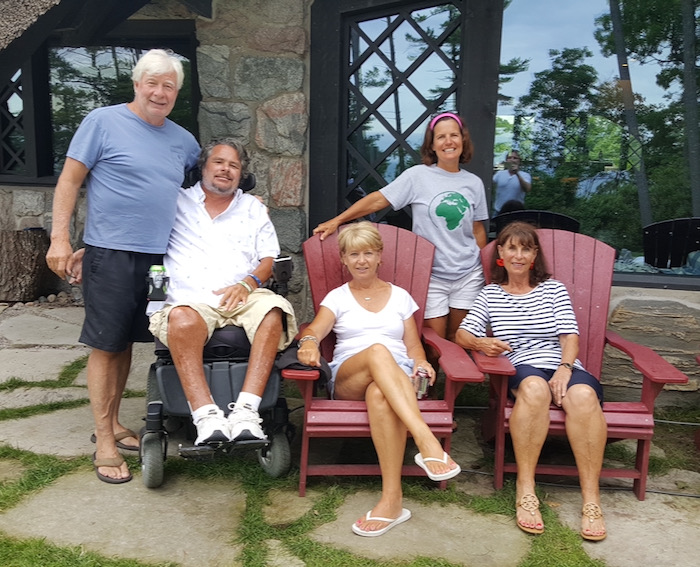 Thanks, Patty, for sharing your indomitable son with Godsigns readers.  We can all use a dose of his determination and your dedication.

Here’s hoping the Prince of Charlevoix is somehow back on both legs now, free of pain and skiing the waves of a heavenly wake.

3 thoughts on “The Remarkable life of Charlevoix’s Stevie Schaefer”