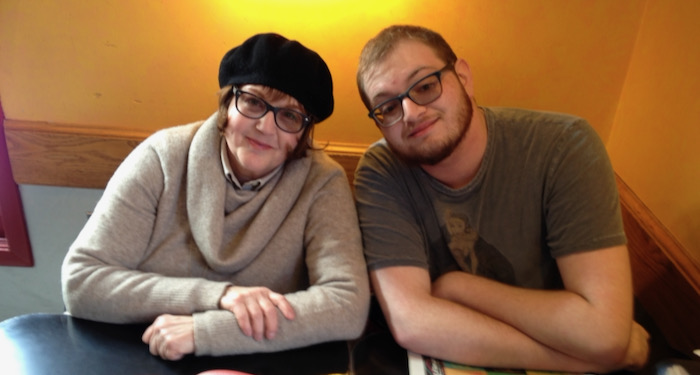 William and his Mom enjoyed lunch recently at Zingerman’s Deli.

I’ll bet you’ve heard the wonderful poem, “The Dash,” by Linda Ellis.  She writes about a eulogy a man gives for a friend, about how his friend spent the years between birth and death, years .  represented by a tiny bit of punctuation.

“…it matters not, how much we own, The cars…the house…the cash. What matters is how we live and love, And how we spend our dash.”

I’ve run into a young man who’s determined the spend his dash as well as he can despite a considerable setback.  His name happens to be Dash: William Dash.

While I’m not the most dedicated of worshippers, I’ve found a compelling reason to attend Temple Beth El on Yom Kippur.  The Bloomfield Hills, MI, temple invites members to share their survival stories on the Jewish Day of Atonement.  This year a courageous young man spoke about the challenges of living with autism.  Backed up by his mother, Christa, William shared some insights into the accommodations he makes every day.

All I could think was: WHEW! 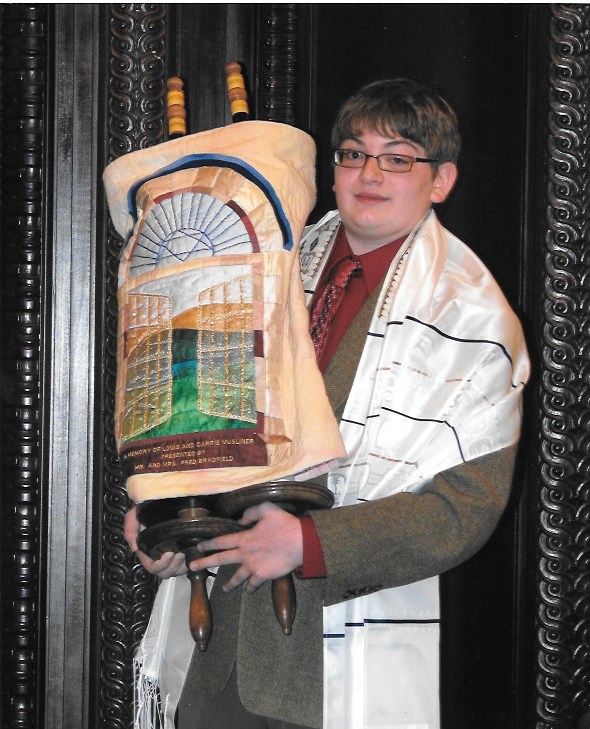 William’s determined to live as well, and as normally, as possible.  That included getting through high school and Macomb, MI, Community College.  Unable to drive, he had to take a bus to school.  He needed to check bus schedules daily and take two busses, ”even if that meant being an hour early.” Sometimes it meant having to race to class and apologize to professors if a bus ran late.  That same determination saw  him through Oakland U. where he graduated with honors.

Challenges present every day.  Because sensory sounds distract him, William brought letters to professors, requesting to take tests in a separate, quiet area where he could concentrate.  Apparel can be problematic.  Because sensory issues are exacerbated, “An itchy sweater feels like sandpaper.”  But William’s ‘main issue” relates to hearing.  At a Passover Seder at Temple, for example, William heard all the sounds around him and had trouble isolating one voice that was speaking to him.

William went through behavior therapy to learn how to cope with stress in a positive way.    When upset, “Instead of yelling or getting angry or getting mom angry,” he’s learned to  retreat to his room and calm down.

William, 28, has held jobs as a Package Handler at UPS and a Defined Contribution Benefit Associate at Prudential.  Currently his “biggest challenge” is finding a full time job.  He hopes to work as a writer, editor, proofreader or artist.

“Like cerebral palsy, autism doesn’t go away,” William says.  “But with health and guidance, it can improve.  Neuro-atypical people may be unable to do certain things, but sometimes we surprise ourselves.   A long time ago I’d never have believed I’d be able to get up on the bima and read from the Torah.”

William credits Temple staff for helping him.  “Temple  Beth El has been there for me.  I felt very supported through religious school and my Bar Mitzvah.”  Temple provided his first job as a substitute teacher.

One woman sat by herself in the second row.  From the loving way she gazed at William, and the number of tissues she used, I guessed she was William’s mother.  I could feel her beaming pride.  I could only imagine how challenging her life, and her son’s, had been.

After William’s remarks, Rabbi Mark Miller invited Christa to speak.  She said, “Regardless of the challenges our family has faced, God has given me so much.  From this young man standing beside me to my sister who lets me call at 2am, I’m blessed to have a family that supports me and work that gives me time off if I need it.”  Christa’s held jobs at a Montessori school; she’s currently Office Administrator.

“I’m a person who sees the glass as half-empty.  I’d hope for the best but fear the worst.  William’s diagnosis was dire.  He was diagnosed with cerebral palsy when he was born.  He was also born with ptosis of the left eye, which could have left him blind in that eye.  At 18 months, William had his first seizure and stopped talking.  He’d stare off into space and get upset often.  I’d have to hold him during a meltdown so he wouldn’t hurt himself.  Not only was this tiring physically; it was emotionally exhausting.

‘’It does take a village.  I spent countless hours in advocacy courses.”  These included Parent Leadership Program Training and the Macomb County Autism Society (as a board member), writing letters to senators and President Obama, pushing for funding for autism and special ed millages.

“For four years William was non-verbal and self-abusive.  He had seizures.  I remember the first time William had a horrible seizure while I was holding him.  His eyes rolled back in his head.

“I was William’s voice. In time, I realized I had to help my son become his own voice.  When he’d  tell me some slight that happened to him, it would break my heart.  Any parent who has a child with a disability wants the best for them.  As William grew older, I knew I needed to step back, let him fight his own challenges.”

Christa and William came up with a contract.  They taped it to the fridge.  “If I disagree with a decision my son makes, such as what job to apply for, I’ll explain my thinking.  But it’s his decision. I hope people will reach out to him.  There’s a loneliness I feel for him.  I just want people to feel comfortable asking questions and give him a chance.

“Though I have no control over the outcome, I place my faith in God.  I know God will be there for me, no matter what.”

Thanks, William and Christa, for sharing your story.  You’re both heroes in my book.  I’m proud to belong to a Temple that shows such compassion.