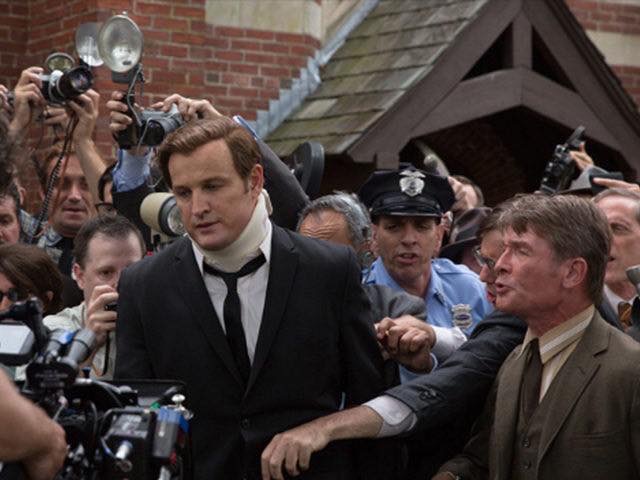 So whoever knows the right thing to do and fails to do it,

for him it is sin.

Director John Curran’s sober, matter of fact recounting to the tragic events surrounding the events of July 18, 1969 will be viewed by the many Kennedy haters as a vindication of their negative view of the family. At the same time, admirers of the Kennedy family, because of the screenplay writers’ (Taylor Allen and Andrew Logan) avoidance of any exaggeration of the known facts (there is no hint of any sexual involvement between Senator Kennedy (Jason Clarke) and Mary Jo Kopechne (Kate Mara), can see the film as a moral parable dealing with both sins of omission and commission. If ever there was a modern example of classical and Shakespearean tragedy, the story of Teddy Kennedy is it.

After participating in a yacht race off Martha’s Island, Kennedy and four other male friends gather at a rented cottage on Chappaquiddick Island for a party with six of what they called the “boiler room girls,” single women who had worked on Bobby Kennedy’s Presidential campaign the year before. Ted and his cousin/close friend and adviser Joe Gargan (Ed Helms) hope to lure Mary Jo back into politics. Following Bobby’s assassination, she had been so upset that she had dropped out of the field. During the drinking and dancing, Teddy talks with her more than anyone else.

At the end of the evening he offers to drive her back to her home. When they spot a patrol car, he pulls to the side of the road because he feels the effects of his drinking. When the cop calls out to them, he quickly drives away. The wooden bridge with no rail connecting the two islands is at a slight left angle from the road, so when he momentarily takes his eyes off the road, the car shoots over the side, capsizes, and sinks to the bottom of the pond, its wheels sticking slightly above the water.

After trying to open a window of the submerged car, Kenney swims to shore, stunned and confused. Making his way back to his cottage, he calls Joe and Paul Markham (Jim Gaffigan) the State Attorney General, outside and reveals what has happened. They drive him back to the bridge, where they dive into the water, but also are unsuccessful at getting a window or door open. When they part, both urging him to call the authorities, Kennedy assures them that he will and then surprises them by swimming back to Edgartown. He returns to his hotel but does not call the police. Instead, he calls his father Joe, the paralyzed family patriarch who can barely speak. The old man’s advice is one word, “Alibi.” There is no hint of concern for the young woman—she has now become “a problem.” Indeed, Kennedy’s first words to Joe back at the cabin had been, “We’ve got a problem. I’m not going to be president.” He even attends a brunch the next morning and never brings up the accident. Over ten hours have passed before he finally contacts the police, who had already discovered the submerged car with Mary Jo’s body inside.

The outrageous events set into motion by his power-obsessed father show the benefits of money, blood, and connections. The team of fixers include such Kennedy loyalists as presidential speechwriter Ted Sorenson (Taylor Nichols), former Secretary of Defense Robert McNamara (Clancy Brown), and of course, fellow party-goer and friend, the Massachusetts Attorney General Paul Markham (Jim Gaffigan). Their elaborate plan includes the local police chief, the coroner, who does not conduct an autopsy, and others, all who eventually manage to arrange for the Senator a relative minor charge—that of leaving the scene of an accident with a slap on the wrist penalty. Their machinations place him even more deeply in the shadow of his two brothers because of their earlier service to them.

The heinousness of this conspiracy is intensified by the film’s assumption, based on testimony given by the captain of the Edgartown Fire Rescue team, that Mary Jo probably lived in the trapped airspace for approximately two to four hours until she consumed all the oxygen of the air bubble at the back of the car! (He testified, “I could have had her out of that car twenty-five minutes after I got the call. But he [Ted Kennedy] didn’t call.”) Though this is not a proven fact, its probability heightens the charge of sin by omission. We can well imagine the anguish the doomed woman must have endured. If only he had called in help right away!

The film also depicts the attempt by Kennedy to shape the story by concocting a false story of her being the driver, and then trying to depict himself as the victim. I think it is Joe who is especially upset by the latter botched attempt. Kennedy even dons an unnecessary neck brace to show how injured he was, but then forgets it as he turns easily to see who is behind him at the church funeral, something that reporters quickly notice.

A lesser film might have left matters at this, portraying Teddy Kennedy as the foulest politician ever to have served in the US Senate–which is how some people I know view him, thereby refusing to acknowledge any of the good things he achieved in his long Senate career. The film does not leave matters there but explores the complexity of the man who had grown up in the shadow of his more accomplished brothers.

The oldest, Joe, whom the father intended to make President, died a hero’s death during World War Two, so the father’s attention and ambitious plans moved on to John, and only after the tragedy of 1963, to Bobby. As the youngest of the sons Teddy received the least amount of attention and affection, and now at the lowest point in his life, he feels the full force of the elder Kennedy’s contempt.

We might wish that this were a tale of fall and redemption, as it did become in the political sense. After his famous (or infamous, depending on your view point) TV speech explaining his erratic behavior of that night, the voters of Massachusetts did remain loyal, re-electing him to office by a large majority, and continuing to do so for over forty years. Cynics might observe that they got the kind of representative they deserved, and yet his subsequent record of championing laws dealing with health, education, and numerous social justice issues are praiseworthy. One wonders how much of his tireless efforts to better the nation was fueled by his guilt and attempt to atone for it. We are left wishing that he had decided to tell the truth and accept the consequences, but he did not.

In this sordid tale the only figure, other than Ms. Kopechne, who seems admirable is Kennedy’s cousin Joe, who slowly loses his respect for the proceedings and his cousin, so that at the end of the film we are told that he broke off relations with Kennedy.

What a contrast to the two big stories unfolding on that 1969 weekend—the tragic death and cover up of guilt in Massachusetts and the launching of a new set of heroes as the first man in the moon stepped down onto lunar soil while most of America and the world were watching. Behold the shame and the grandeur of America!

Australian actor Jason Clarke, who played the far less admirable Henry McAllan, the Mississippi racist father in Mudbound, skillfully captures the weakness and the anguish of the troubled man who would survive the scandal to become “The Lion of the Senate.” In the scene with his disapproving father who despises his weakness his eyes and tone of voice plead in vain for acceptance. We see a man whose instincts tell him to do the right thing, but who gives in to expediency instead. Later, we can imagine him convincing himself that keeping his Senate seat enabled him to do much good. It is so easy to deceive ourselves when we belong to the 1% of the population. Kyrie Eleison!

The cover up of the truth of Sen Ted Kennedy's guilt in the death of Mary Jo Kopechne on Chappaquiddeck, seen as a morality tale.
Editor Rating ★★★★★5 out of 5
More Details