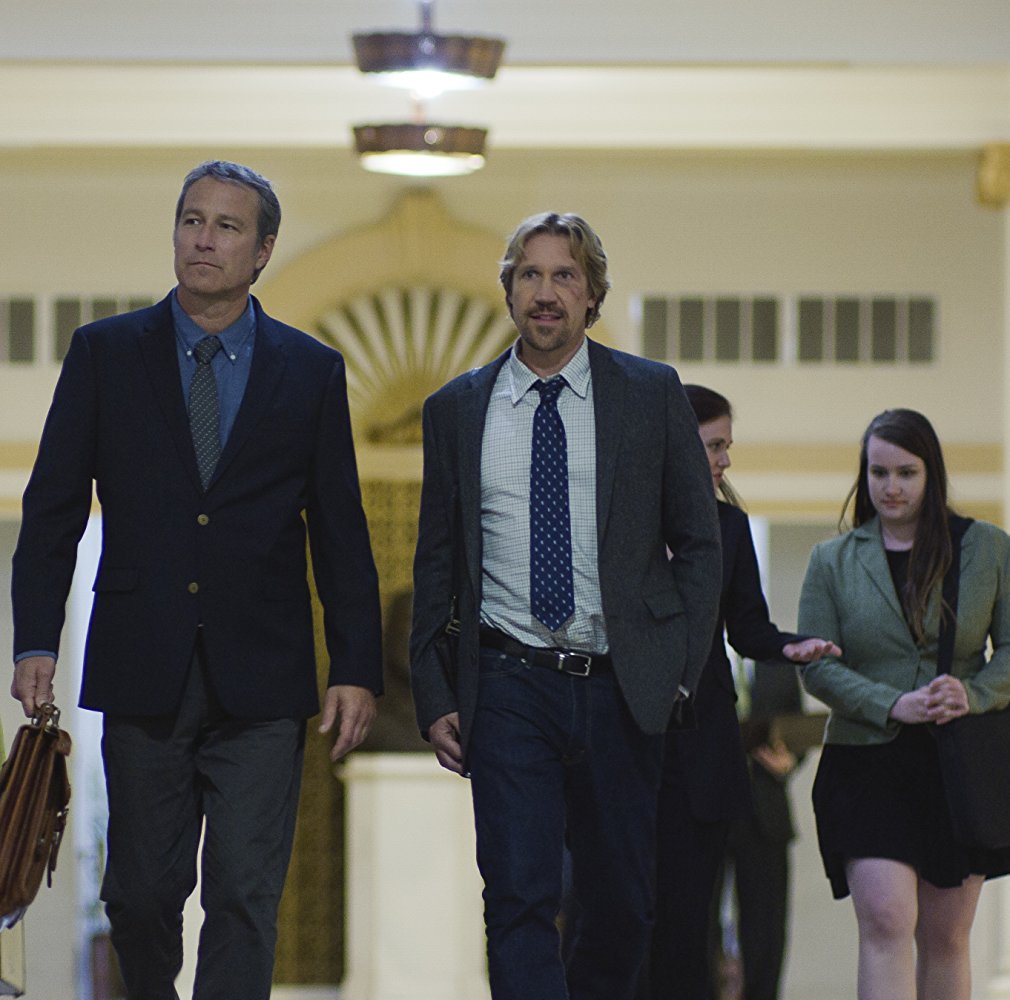 For his anger is but for a moment; his favor is for a lifetime. Weeping may linger for the night, but joy comes with the morning.

In 2014 I was so turned off by the first film of this franchise, so phony was its paranoia-filled plot, that I automatically stayed away from the second film, with its story set in a high school rather than a Midwestern college. The inclusion of the congenial actor John Corbitt led me to give this third attempt at Christian apology a chance, which I am glad I did. The producers chose a new director/writer, and Michael Mason takes the franchise far beyond its past limitations, even placing a charge made by critics such as myself into words uttered by John Corbitt’s non-believing character. And the film’s basic message is not directed this time at “the world,” but at “the choir,” the church itself, making this one of the few faith-based films that I want to add to my collection of DVDs.

We are back in Hope Springs, somewhere in the Midwest, where in a series of TV news clips we learn that the embattled Pastor David Hill (David A.R. White) of St. James Church has been jailed because he refuses to turn over transcripts of his controversial sermons. We are never told why they are so controversial (or why the prosecutor doesn’t just go onto the church’s website to obtain them), just that that they are upsetting to the community, with the result that every week there are angry demonstrators outside the church. At Hadley University the Board, which has coveted the land the church sits on as a great site for its long-needed student union building, decides that this is a good time to get rid of the turmoil by exercising its right of eminent domain to take over the property. The Church is older than the University, but now that the school is a state institution, the board members believe that a student union is more important than a church that has outlived its usefulness. Thus, one of the film’s issues this time is whether or not the church is of use to the larger community.

The unwelcome task of telling the pastor the decision falls to President Thomas Ellsworth (Ted McGinley), who has been a long-time friend of David. Meanwhile David has announced to the congregation that his friend from Ghana, the missionary Rev. Jude (Benjamin Onyango), is now their co-pastor. As with the church’s campus pastor Josh Wheaton (Shane Harper), this character figured in the very first film. I wish we could have seen more of this charismatic figure, but he soon dies when, during the night, an angry student hurls a brick through the church’s window, triggering a destructive fire in which Rev. Jude is killed. The student is Adam (Mike C. Manning), upset that his devout girlfriend Keaton (Samantha Boscarino) is ditching him over his lack of faith. He blames the church for his loss.

For legal help Pastor David appeals to his older brother Pearce (Corbett). Because they have been estranged for years, Dave drives the 300 miles to Chicago and shows up unannounced at his brother’s law office to plead in person for his assistance. It is the series of encounters between the two brothers that really brings this film to life—and shows the wisdom of choosing Michael Mason to both write and direct the film!

Pearce proves invaluable in staving off the bulldozing of the ruins of the building and in advising the congregation concerning their rights. He is less successful in closing the gap that had cut him off years earlier from Dave and the family when he had questioned his childhood faith. The two hurl accusations back and forth, with Pearce made aware of his failures—three divorces, a heart operation, and his leaving David alone to care for their aging parents during their final illnesses. Both brothers harbor resentments, but it turns out to be the Christian one who has clung the most tenaciously to them. This turns out to be true for David in another area of his life as well.

Their building basically destroyed, Pastor David and his flock are welcomed at an African American church where the Reverend Roland Dial preaches a pointed sermon on love. Only as the story progresses do we see how pointed this sermon really is—when David learns through an anonymous text message the identity of the student who caused the fire, he becomes so angry that he tracks down the guilt-ridden Adam on campus and physically attacks him, earning himself another short stint in the local jail.

The film’s depiction of Pastor David Hill as a laidback minister with family and anger issues makes this film far more believable than the first one. There is an under-played romance between him and the head of the local soup kitchen, Meg Harvey (Jennifer Taylor), who always makes herself available for a word of support or advice. Best of all, is the way his troubled relationship with his brother plays out. Pearce accusingly tells Dave that as Christians, “You guys love to play the victim card. I’m not engaging in a false narrative with you.” He almost tearfully reminds his younger brother that the family drove him away from the fold when he would not give in to their arguments over his lack of faith, a rejection that he still feels after all these years. This makes for a powerful illustration of how Dave and his family have neglected Matthew 5:23 for so many years. To its credit, the film does not include an altar call moment for Pearce or warm brotherly embrace, although after Pearce returns to Chicago before the upcoming trial, there is evidence that a reconciliation will ensue.

However, there is a warm scene of reconciliation between Pastor Dave and Adam, the student he had attacked, made all the appealing when he gives the imprisoned young man the personal Bible of Pastor Jude, the man who died in the fire, David telling the young man, “He’d want you to have this.” The outcome of the dispute between the University and the church is also well resolved, with the realization that the church is more than bricks and mortar.

As the depiction of the spiritual journey of a flawed man of faith, the film works well. I specially appreciated the brief scene in which Dave’s unconscious sense of white entitlement is called out by the black pastor: Dave, mentioning the brick that caused the church fire, seems to think his suffering is not understood by Dial. This angers the older minister, a veteran of the Civil Rights wars, who tells him, “I could have built an entire church with all the bricks thrown through my window!”

This film probably is not drawing in the “nones,” who have given up on the church, but it so effectively preaches to the choir its message of love and tolerance that it removes the negativity from the charge—the “choir” can benefit from this visual parable. Church groups ought to embrace and discuss this message, for as the author of First Letter of Peter puts it, “For the time has come for judgment to begin with the household of God…” (4:17)

A pastor battling to save his church property from take over by a college also has issues with his brother.
Editor Rating ★★★★★4 out of 5
More Details