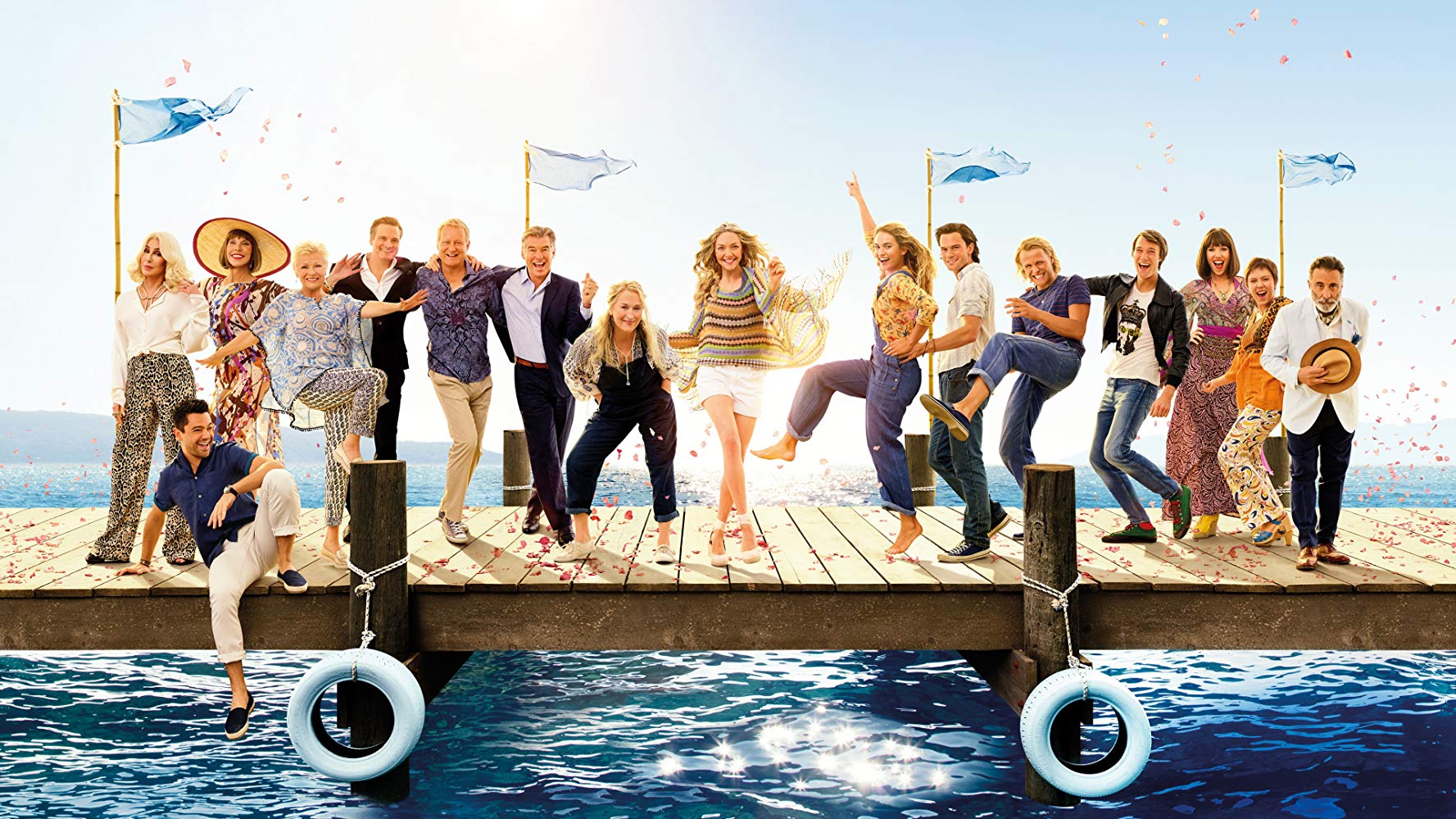 Although I love musicals, I am well aware of the artificiality of a genre that features its characters breaking out in song at any place or time. Thus, I appreciated Entertainment Weekly calling the film, “A shiny-bright jukebox musical with a heart of gold and a plot of pure polyester, Mamma Mia: Here We Go Again…” The music was so-so (though it improved toward the end) and the plot obviously patched together hurriedly so as to give us Donna’s (Meryl Streep) backstory from the standpoint of her born out-of-wedlock daughter Sophie (Amanda Seyfried), the girl whose father may have been one of three men.

There many flashbacks to 1979, beginning with a stupid, unbelievable scene of young Donna (Lily James) graduating from Oxford (I guess we’re supposed to think this is cute or clever). Her two pals, of course, are on hand in this overwrought dance number, young Rosie played by Alexa Davie and Tanya by Jessica Keenan Wynn. Donna leaves them behind to go on a whirlwind journey involving a Brit ina leather jacket (Hugh Skinner); the blonde Swede sailboat owner Bill the randy Swede (Josh Dylan); and in a Mediterranean sequence Sam (Jeremy Irvine). In the midst of her promiscuity she audasiously declares—to Bill, I think—that she is “not that kind of girl”—but nonetheless goes to bed with him.

Many ABBA songs later Julie Walters and Christine Baranski return as the grown Rosie and Tanya, but it is when Cher flounces in that the film really came alive with me (she arrives by helicopter!)—and of course, Merly Streep at last making a cameo appearance. None of these, though, have the most memorable lines. Instead they are spoken by the character played by British-Iranian stand-up comedian Omid Djalili. He is the Greek customs official who carefully compares the passport pictures to the visages of virtually all of the characters as they land on the island. To one of the “fathers” he says, “Sir, in your case, age becomes you. As it does a tree, a wine… and a cheese,” but to another he declares, “Time has been most cruel to you sir.”

This is a fun popcorn movie that requires people of faith to set aside the central premise of Donna’s loose sexual morals, so maybe I should call it a guilty pleasure. I cannot think of a relevant Scripture passage, except for the passages dealing with sex, nor have I spent any time conjuring up any discussion questions when there are so many better films to discuss.

I should mention, however, the one scene that could generate a good discussion. Occurring near the end, it is the beautifully photographed scene of the baptism of Sophie’s baby. There is no dialogue indicating any renunciation of the Devil and his works or a promise to raise up the child “in the nurture and admonition of the Lord,” but there is a “congregation” of loved ones and some of the villagers. The presiding priest is merely a part of the scenery, and yet it is interesting that the film makers add this to the climax of the film. Also, people of faith who see symbolism in water and birthing, will connect the scene of Sophie’s giving birth to the church’s sacramental ritual that is regarded as the spiritual birth of a child.

Filled with dancing & ABBA songs, this prequel flashes back & forth between Sophie's reopening of her mother Donna's Greek island hotel & the past showing Donna's romances with the 3 men, one of whom was her father.
Editor Rating ★★★★★3 out of 5
More Details