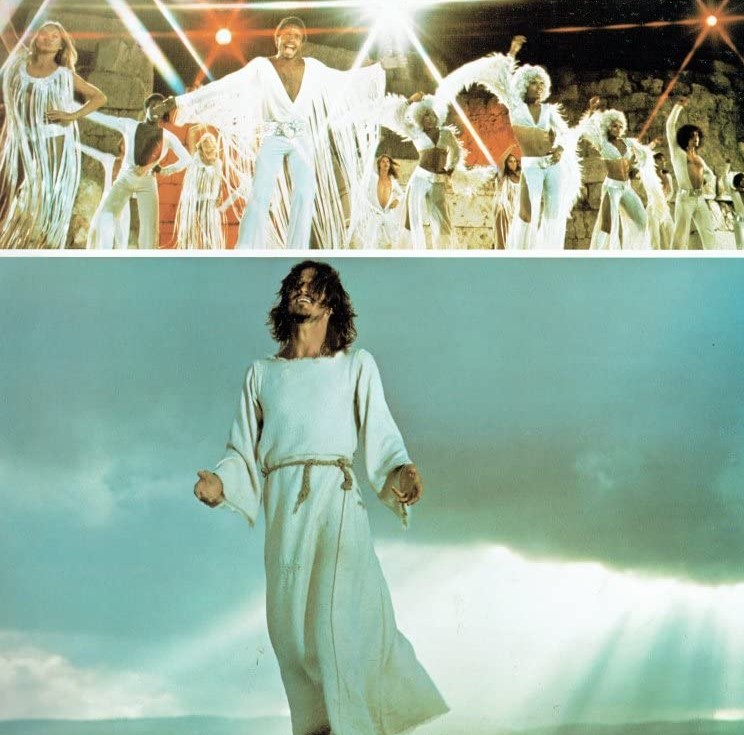 Lent is a good time to watch the rock opera based on the Passion of Christ . I have recently discovered that two other versions of this musical are available on DVD. In this issue we look at the 1973 and 2000 releases, and in the next issue the 2013 release. How do they compare?

It was either in 1969 or 1970 that I became aware of a British project centered on Jesus Christ. While I was conducting some business at a Parkersburg WV radio station, Marsh, the chief DJ at the station, called me into his office, telling me he’d like me to listen to a promo record he had just opened. He played it, and a chorus singing “Jesus Christ, Jesus Christ, who are you, what have you sacrificed?” leaped out of the speakers. I said it sounded interesting, but having no idea of the context, I couldn’t give an opinion on the song. Marsh replied that he had read that the song was part of an album a British team was working on. “I don’t dare play this on the air,” he said, because listeners would deluge the station with protests.

Of course, a year later when Tim Rice and Andrew Lloyd Webber’s concept album came out and sold hundreds of thousands of copies, he was playing it—and enjoying it as much as I was. When the 2-disk album was released in 1970 I quickly bought it and began using it with my youth group, and through the years with confirmation classes. The songs generated some good discussions, and many of the kids read the gospels for the first time–not because they were told to, but because the songs aroused their curiosity as to what the New Testament said about Jesus. Marsh was right that Super Star would generate protests—when a troupe toured our state presenting a concert version, my wife and I walked through a large, noisy crowd outside the concert hall. We both felt afterwards the experience inside was well worth the discomfort outside.

In October 1971 a fully staged production open on Broadway, and in 1972 it opened in London, running for 8 years—at that time the longest running show in the British theater.

Then in 1973 Hollywood made Super Star into a movie, directed by one of the leading directors of that time, Norman Jewison. He and co-adapter Melvyn Bragg made the play cinematic by filming it out of doors in Israel. While the Overture is playing the camera shows us brown hills. As it slowly pans to the right, we see ancient ruins, an old wall and some scaffolding. Continuing the pan, it focuses upon a bus. When it stops we see it is loaded with actors and crew. They file out the front door, the last man being Black. Quickly props—some of them guns– and costumes are unloaded, actors prep, and a crew removes a large wooden cross from the roof of the bus. The Overture ends, and there is a long shot of Judas (Black actor Carl Anderson) walking up a hill. The camera zooms in on him as he sings of his concern that Jesus (Ted Neeley) has taken the wrong road in embracing the “talk of God.” He wants Jesus to pull back because of the Roman occupiers and because the crowd will turn on him when they learn that the God talk is a lie.

There follow the other songs and events, with much use of long shots that include the hills and desert and Roman ruins. The trial of Jesus will be held in a large amphitheater that serves as Pilate’s court. Along with the Sixties language with its slang, there are numerous anachronisms—the soldiers dress in sleeveless T-shirts and fatigues, their heads encased in shiny 20th century helmets. Many carry weapons appropriate to the age, spears, but some also are armed with rifles. In one surprising scene Judas barely keeps ahead of a row of tanks roaring toward him. At one point several jet fighters scream over head. In the cleansing of the temple scene, postcards are among the items being sold—as are guns, sex, and gambling.

It is mainly Peter (Paul Thomas) who emerges from the disciples as a personality, and he is overshadowed by Mary Magdalene (Yvonne Elliman) whose troubled love for Jesus is so beautifully expressed by her song “I Don’t Know How to Love Him.” This song was delivered so beautifully that the creators added another song, largely sung by her (and Peter), “Could We Start Again, Please?”

The plot is very close to that of the gospels, with the exception that Pilate has a troubling dream about the Galilean, his wife not being shown. And there is just one cross, not three. Thus, Jesus utters six of the traditional “Last Words of the Cross,” the one welcoming a thief into Paradise being omitted because there are no thieves beside him.

There is no Easter either, Rice and Webber focusing solely on the Passion of Christ. (I am not sure which disturbs fundamentalist Christians more, the omission of the Resurrection or the sexual chemistry between Jesus and Mary Magdalene.) The title of the closing music “John 1941” puzzled a lot of unchurched record buyers, until it was pointed out to them that this was a Scripture reference to the Gospel of John, “ Now in the place where He was crucified there was a garden, and in the garden a new tomb in which no one had yet been laid.” As this music is playing we see the troupe reboard the bus—everyone but Jesus. Again, Judas is last. The bus pulls away. The sun is setting, the cross in silhouette before it. A shepherd—maybe the same one we had seen near the beginning of the film?—leads a herd of goats, moving off camera to the right. A visual reference to Jesus as “The Good Shepherd”?

There’s more to be said, especially about one of my favorite sections involving the exchange between Judas Zealotes and Jesus, but I will include such observations in my review of the later versions available on DVD. I close here by noting that this is a time-bound production, Judas, with his bright outfit’s flare-bottomed pants forever looking like a hippy  about to drop some acid. Also, to note that this is not a theological exploration of Christ but a psychological one, as especially revealed in the song “Gethsemane” wherein Jesus demands of his silent Father reasons for why he should die. Actually, the rock opera is more about Judas than Jesus, the musical being a marvelously designed vindication of his character. Rice and Webber argue against the Gospel of John’s simplistic view of the Betrayer as a thief (see John 12:6), presenting us with a man who deeply loved his master but who believed he was going astray from his mission, needed a jolt to bring him back to the right path, and sank into despair when by the priests’ lethal treatment of Jesus.

Despite it being so time-bound, I will cherish this version, even as I move on to new ones. The music, to quote Mary Magdalene concerning Jesus “moves me so,” no matter when it is played!

No discussion questions until I have time to write about the 3rd DVD –the Live Arena Tour—in the next issue of VP.

This rock opera, with much of the cast dressed like hippies, recounts the last week in the lives of Jesus Christ and Judas Iscariot.
Editor Rating ★★★★★4.5 out of 5
More Details