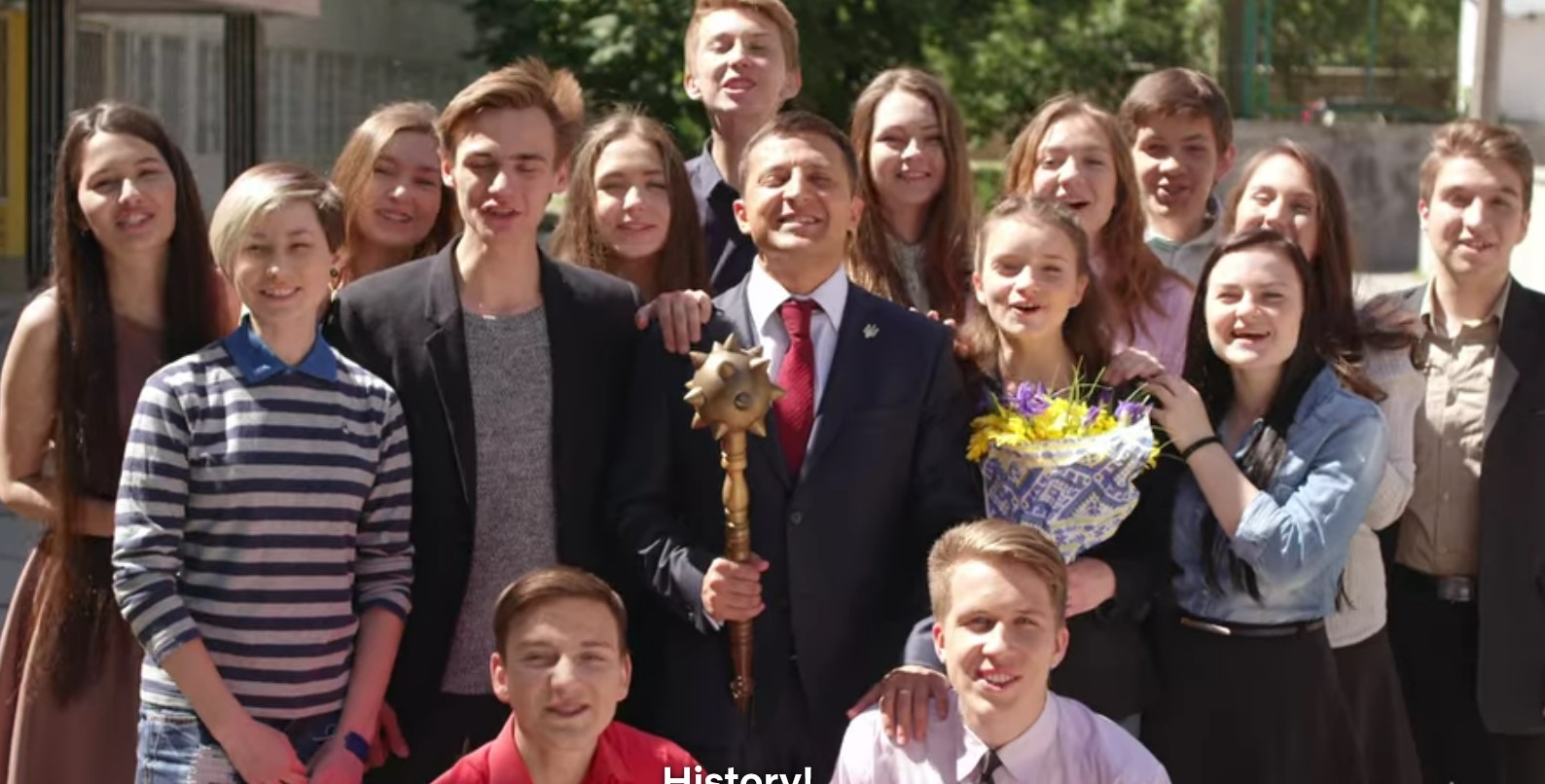 So the last will be first, and the first will be last.


He has brought down the powerful from their thrones,
and lifted up the lowly;

Again I feel a great debt to Netflix for making available to the English-speaking world a world treasure. (Thus far 23 episodes.) The Ukrainian comedy series in which Volodymyr Zelenskyy starred in as the fictional president of Ukraine is an incredible example of life imitating art! And what a series of visual parables about lifting up the lowly and of the great reversal proclaimed by Jesus in the gospels! I have seen just the first few episodes but want to report on them before putting this issue of Visual Parables to bed.

The hero of the 51 episodes of the series is Vasily Petrovich Goloborodko (Volodymyr Zelenskyy), a high school history teacher who unexpectedly becomes President of Ukraine after a video of him spewing forth an invective-filled rant against the corrupt politicians of his country goes viral. We can say that actually it is his students who are responsible for his sudden rise from that of an ill-paid teacher living in a run-down apartment with his parents and sister to that of the most powerful man in his small nation. One of them had filmed him from outside through the window and then posted the video. Adults had seen it and indicated in their responses that they would vote for him. The students had raised enough money through a crowdfunding site (He himself is having trouble repaying a small bank loan!) to pay for his registration fee. And they will continue to cheer him on when, to his surprise and consternation, he actually is elected.

There is another faction that ironically is given credit for his election. The first series begins with three oligarchs on a rooftop one night gazing across the skyline of Kyiv. They agree not to interfere in the neck-to-neck race between the two leading contenders for the presidency, both of whom are corrupt. They will let the people decide. (The implication being that it does not matter who wins, that they can buy either politician.) Throughout the episodes that I have seen thus far we return to these wealthy manipulators, never getting a clear look at their faces, but instead, close-up looks at their bejeweled hands, lavish foods, or the billiard table where they scheme. In another sequence, when they seek to make up for their lack of knowledge of the new president, they watch a screen where photos and videos provide the background for the hapless history teacher unexpectedly thrust into power. This last might remind you of the newsreel summary of John Foster Kane in Citizen Kane—though Vasily will turn out to be far different than the American power seeker.

I love the way the reversal of Vasily’s status is depicted, his character reminding me of Jimmy Stewart’s young and naive Jefferson Smith whom everyone believes is out of his depth when he is appointed to the US Senate by a corrupt governor whose backers think they can control him. In the first episode Vasily wakes up late. In his haste he is shut out of the bathroom by his grown sister (Ekaterina Kisten) who is heedless to his pleas that he needs to use it. His father (Viktor Saraykin ) treats him with disrespect, and his mother (Nataliya Sumska) says that she does not have time to iron the shirt he needs to look presentable at an upcoming faculty meeting. He also is worried about being able to make a payment on his bank loan, his salary being so meager.

He cannot believe it when he answers the knock on his door and Yuri Ivanovich (Stanislav Boklan), with two burly bodyguards is there to welcome him to the presidency. When he says he must take the time to stop and make a loan payment, he discovers that not only can he go to the head of the line, but that his loan is fully paid off, thanks to a “lottery.” Later, at his home his family are suddenly fawning over him, his mother now ironing not one, but all of his shirts for him, and his sister happily yielding him the bathroom. The earlier faculty meeting where he had expected a dressing down by his critical principal turns into a gala celebration in which the principal gushingly holds a cake while praising him.

At the presidential palace Yuri Ivanovich introduces him to a mind-boggling array of servants and advisers. During this orientation a handler tries to acquaint him with a vast array of forks, spoons and knives used at a state banquet, and to practice his inaugural speech, he is made to place a walnut inside each cheek. When he talks about writing his speech, Yuri tells him not to worry, that it already has been written for him. When he notices that it sounds a lot like one of Abraham Lincoln’s speeches, he is told that this is all to the good. This speech becomes central in one episode, heralding the beginning of our hero’s push back. On the eve of his inauguration he imagines Lincoln visiting him and encouraging him to speak for himself. Recounting how he had freed the slaves, the Great Emancipator suggests that Vasily too can be a liberator. When the latter objects that there is no slavery in Ukraine, the American points out that the multitude who work so hard and live meager lives while others are living in luxury. This, we will see, is the beginning of a series of push backs that start with his arriving in a taxi rather than the expensive SUV assigned him, laying aside the prepared speech filled with empty promises, and that continues when he dismisses the retinue of body guards designed mainly for show. And what a delightful sequence when he addresses the Ukrainian parliament and then meets the corrupt ministers of his cabinet. You will love the scene in which as he enters the legislative chamber a third or more of the members are in a cluster arguing loudly as if they are about to erupt into a fight. Vasily cannot gain their attention—until he yells out “Putin is deposed!” They stop immediately and turn to face him. A very funny moment, but what a poignant one in the light of recent events.

While Vasily is astonishing Yuri by insisting that they ride the bus to get to the parliament building, we see that his family is heading in just the opposite direction of his simplicity. The father wants to enlarge and redecorate their apartment, even if it means evicting neighbors. Going overboard because everyone is anxious to curry favor with the presidential family, he stuffs the apartment with pricey furniture and works of art. Thus when Vasily returns home he discovers that he has to deal with the opposition of his own family, as well as in the political realm.

This satirical series is as dramatic at times as it is funny. To watch it some seven years after its inception may arouse within you hard to describe feelings. Just as Vasily will be underestimated in the fictional series and will emerge as his own man, so the actor/comedian turned president been regarded in the real world as just another leader, one that our own former president tried to manipulate for his own political schemes. Even from the five episodes that I have seen, my admiration for the actor/politician increases. No wonder that the series became such a popular TV series in the Ukraine. The greater wonder is that the actor playing the fictional political leader has emerged onto the world stage as the real thing, one in which brutal hacks like Vladimir Putin seem like a pygmy beside a giant by comparison.

This review will be in the April issue of  VP, but it will not be until May, after I have seen more of the episodes, that I’ll produce some questions. If you have found reviews on this site helpful, please consider purchasing a subscription or individual issue in The Store.

A naive but honest Ukrainian history teacher rants against corrupt politicians & his students use social media to spread his fame & get him elected president of the nation.
Editor Rating ★★★★★5 out of 5
More Details