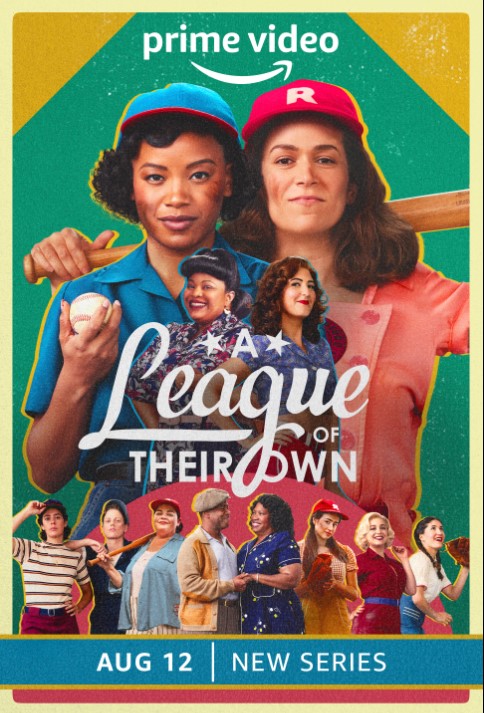 You know the insults I receive
and my shame and dishonor;
my foes are all known to you.
Insults have broken my heart,
so that I am in despair.
I looked for pity, but there was none;
and for comforters, but I found none.


How do you dare remake a film like A League of Their Own that is considered a classic by millions of fans? Producers Will Graham and Abbi Jacobson’s engaging solution—take the few-second scene in the original in which a black woman up in the segregated stands returns the ball so forcefully that the catcher becomes aware that she could have been a try-out but for her race, and make her story parallel to that of the white women’s. Also explore pretty fully the theme of lesbianism among some of the players, just hinted at in the original 1992 film when most of the audience was not ready for same sex romance. The result is an engrossing look at the past that is very informative of the present—and I haven’t even mentioned some exciting moments on the base ball field or the extra details that a series running way over the 2 to 2  ½ hour theatrical film can include.

The characters are pretty much the same though their names are changed. Instead of chewing gum magnate Philip K. Wrigley it is the fictional Morris Baker, owner of a candy bar company, who owns the Chicago ballpark where the tryouts are held, as well as the Rockford Peaches. The chief player we follow is Carson Shaw (Abbi Jacobson, also co-producer), the team’s catcher, very different from Geena Davis’s Dorothy  “Dottie” Hinson. Carson’s husband is away in the Army, so she is leaving her Idaho home without telling anyone about her ambition. She barely makes the train as it is leaving the station.

The team members are a mixed bunch, including a couple of Latinas who cannot speak English, but who are skilled ballplayers—and, of course, considered “somewhat” white. I write ”somewhat” because we see the prejudice against Mexicans when the publicists refer to her as Spanish, a label that goes down better with bigots. The one who will be of most interest to Carson is the glamorous Greta Gill (D’Arcy Carden), much more self-assured is she in regards to her preference for females over males than Carson. The latter will be surprised and then confused when her latent lesbianism is aroused by Greta. The other teammates are from urban areas, so they assume that he Idaho-born had lived on a farm. She is constantly embarassed that they refer to her as “Farm Girl.”

Casey “Dove” Porter (Nick Offerman) replaces Tom Hanks as the coach of the Rockford Peaches. A former professional baseball player his disdain for and underestimation of the women’s abilities is as great. It is not his drunkenness that is stressed here but his desire to get back to the majors that is a chief obstacle to the Peaches becoming a proficient team. At one point they have lost so many games that their owner is considering breaking them up and selling the team. Midway through the season Casey does abandon the team, and the consensus of the players is that Carson assume the role of coach as well as catcher. She becomes the most reluctant, uncertain coach one could imagine, adding to her already struggles over her sexuality and her relationship with her husband.

Along with the coach there is Beverly (Dale Dickey, the Rockford Peaches’ chaperone, whose sculptured face makes her look like the stern soldier she had been. Not the least interested in base ball, she presides over the feminine make-over beauticians give to the team members in an effort to make them more attractive to male fans. Along with the short-skirted uniforms seen in the original film the women are also indoctrinated into etiquette lessons designed to make them “ladies.” And in one funny sequence she even ac companies a player on a date to keep everything proper. It is a pleasure to see her develop into a supporter of Carson as a coach, even though she disapproves of any romantic relationships among the team members.

Meanwhile we follow the ups and downs of the Black would-be player Maxine “Max” Chapman (Chanté Adams), a talented pitcher obsessed with breaking into professional baseball. She cannot even get the coach of the local factory team, which does have Black as well as white players to consider her because of her sex. She lives at home with her mother Toni Chapman (Saidah Arrika Ekulona) who has built up a successful beauty parlour business with the expectation that her daughter will follow her in it. Max secures a job at a local factory in the hope that this help her obtain a tryout on the team. When she and her mother have a falling out she moves in with her best friend Clance Morgan (Gbemisola Ikumelo), who has her own dream based on her skill as a comic book artist. I love it that the writers take the time to give us a rounded view of both this friend and Max’s mother, as well as some other characters that I will leave it to you to discover. I think you will find Clance’s deconstruction of The Wizard of Oz from a Black perspective a real hoot!  Carson and Max meet several times and interact between games, each gaining a deeper understanding and respect for the other.

Along with many new scenes, there are others from the original—we have already mentioned the beauty treatments, etiquette lessons, and the intentionally sexy uniforms—yes these players are also upset over the latter. And then there’s the famous “There’s no crying in base ball” incident which is just as amusing and moving as before.

For me one of the most memorable episodes is the one in which Greta escorts Carson to an underground gay bar in Rockford. The naïve Carson, still struggling with her feelings unacceptable to 1940’s mores, is slow to realize what she is seeing. (This was a time, we are reminded by one whisperer, that “queers” might be subjected to a lobotomy!) Everyone is having such a good time, with women dancing together, and some dressed as men (are they or aren’t they? Carson wonders). Rosie O’Donnell has a wonderful role as Vi, the co- owner of the bar, who sees it as her mission to provide gays a safe sanctuary where they can escape into momentary happiness. The shots of people being able to express and enjoy themselves as they feel they really are is beautiful to behold. Even more so in contrast to the abrupt breaking in of the town police, the homophobic cops lashing out with their clubs, actually enjoying their violent beating of those whom they consider scum. Not even the excellent 2015 film Stonewall moved me as much as this sequence did, driving home how cruel and brutal a form prejudice can take!

The familiar arc of the underdog team is intensified when the owner trades the Peaches’ heaviest hitter to the rival team with the best chance of winning the league’s pennant. Carson has not entirely found her footing as a coach, though she has managed to inspire the team to win several games in a row, keeping their play-off hopes alive. I love it that it is a book which had been given her much earlier that becomes the catalyst for her  St Crispin’s Day speech, delivered to the team when they face their heavily-odds rival on the Big Game Day. The book is A Tree Grows in Brooklyn, Betty Smith’s newly published that year (1943) about an impoverished young girl inspired by a tree that grows through a crack in the sidewalk with nobody tending to it. Seeing similarities in the tree’s uphill battle between and their team, which once had been in the cellar of the All-American Girls Professional Baseball League and now has a chance at the championship, Carson inspires the women so much that do believe they can win over the odds. And then their former teammate hits a homer, and—well what transpires is one of the most inspiring conclusions that could possibly be imagined. As an example of sportsmanship it probably will leave you with more than one tear on your cheek. For people of faith, it will be another example of winning by losing.

The development of the characters is skillfully depicted, beginning with Shaw, the sheltered country girl coaxed out of her shell (in regards to sexual preference) by Greta, and thrust into a leadership position she feels at first totally unworthy of; and at the other end of the sexual spectrum homophobic Shirley who is scornful of lesbian teammates, but ending the season with a very different attitude. And of course, Max, living in (and with) her mother’s shadow and attracted to a boy and thus repelled when she first spies Shaw and Greta clandestinely embracing, but discovering her own repressed desires from a gay “uncle.” Human beings can change, and for the better, too, this series reminds us.

I can scarcely wait for Season 2 of this incredibly good series, first rate in writing, acting, and production design—the careful recreation of street scenes and clothing of the Forties is terrific. There are many more characters that can be explored further, as well as the fate of Carson and her relationship to her husband, returned from the war, and her true love Greta.

During WW 2 a group of white women face sexism on a baseball team while a Black woman ballplayer is rejected because of her race.
Editor Rating ★★★★★5 out of 5
More Details