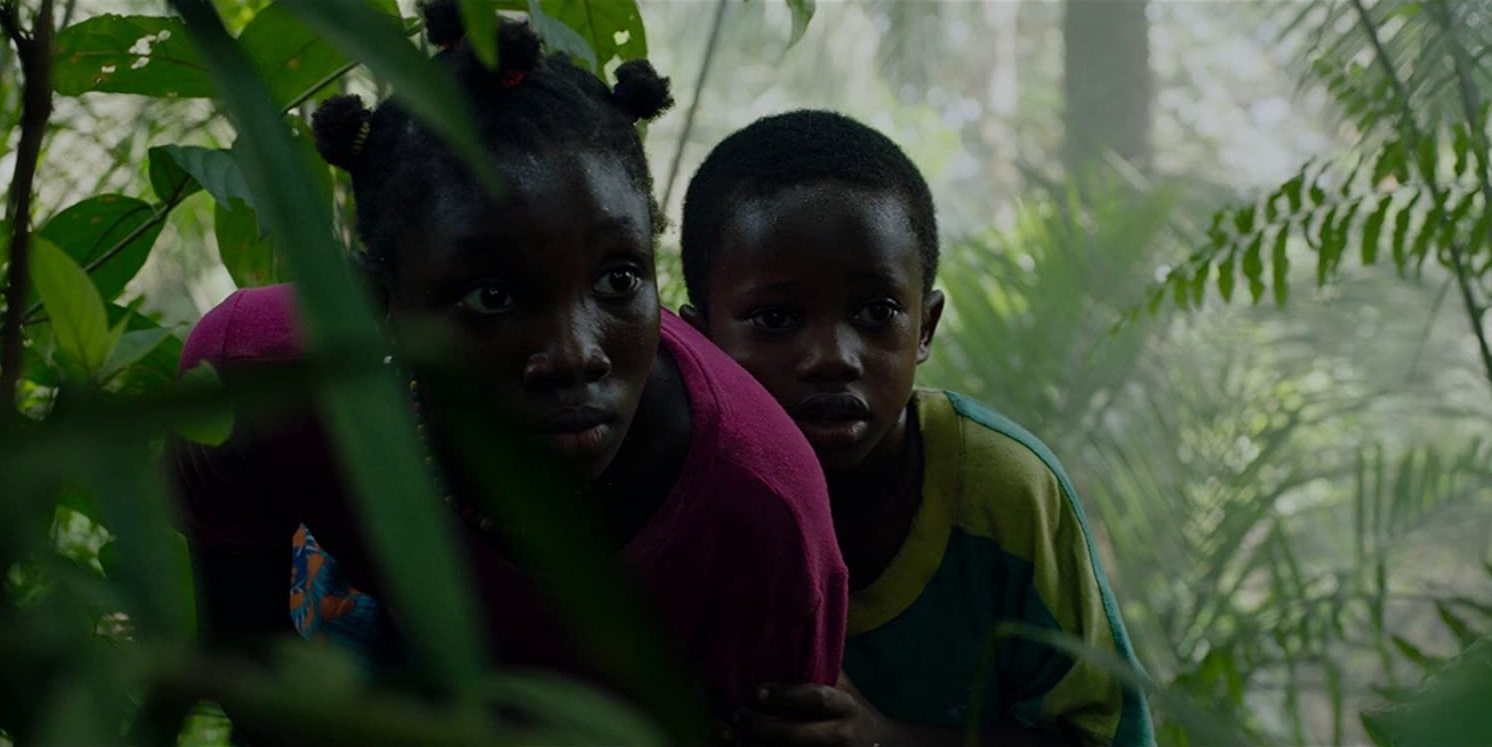 The wealth of the rich is their fortress; the poverty of the poor is their ruin.


There are people who take cruel advantage of the poor and needy; that is the way they make their living.

Spanish director Salvador Calvo serves up three stories set in Africa, two of which really make us feel the impact of the world refugee crisis. The story of six-year-old Adu (Moustapha Oumarou) is deservedly given the majority of the screen time, but the stories of border security guard Mateo (Alvaro Cervantes) and animal rights activist Gonzalo (Luis Tosar) are also important. As has often been observed, the world is like a web; strike one strand, and the others will vibrate due to their connection. Just how this is so we see near end of the film, a girl’s bike being one connecting thread, even if tangentially.

The film starts in the sovereign Spanish city of Melilla, one of two on the coast of Morocco opposite Spain itself. Mateo is one of the security guards sent to control a mob of Africans storming the 20-foot-high double fence. One of the refugees is screaming in pain because his abdomen is caught on a coil of the razor barbed wired. He blindly fights against the guard trying to extricate him. The guard hits him with his staff, and the man falls to the pavement, cracking his skull. The guards are drawn up short, because they know there will be an investigation.

Twenty five hundred miles from there in Cameroon, little Adu is being given a bicycle lesson by his older sister Alika (Zayiddiya Dissou) when they hear a strange sound in the surrounding jungle. Dropping the bike, they creep through the underbrush to discover a group of men are sawing off the tusks of a bull elephant. When the poachers hear and start searching for them, the children flee, leaving the bike behind.

Gonzalo has come from Spain to Cameroon to help stop elephant poachers. Unfortunately, the NGO head, castigating the African rangers for failing to protect the elephant, seems to like the animals better than his men. In their resentment of his treatment they almost mutiny, one of them telling him he should leave Africa. They will not take orders from him. The divorced father is hosting his troubled daughter (Anna Castillo), who seems hell-bent on spacing out on drugs. She is as resentful of him as are the Africans. He finds Alika’s bike and “gives” it to her for a donation to his NGO.

The poachers at night track down the children, too dangerous as eyewitnesses to leave alive. The brother and sister escape, but their left behind mother is murdered. There begins the children’s long odyssey north, an aunt deciding to send the children to their father who has found work in Spain. She places them in the care of an unscrupulous mule who takes the money and then leaves the two at the edge of an airport, telling them to dress warmly and hide in the wheel well of an airline, and they will land in Paris, better than their original destination. The wheel well sequence is a harrowing one, and Alika will not make it to Paris. Adu won’t either. The plane landing at an airport in Senegal instead. In the city the boy will hook up with the street savvy teenager Massar (Adam Nourou), who is able to provide them both with food, but only by stealing and selling his body for the pleasure of one of the many truckers he encounters. This kind-hearted teenager will be a life saver for his small charge.

Mateo is approached by a woman lawyer working with the African refugees. She confronts him with their story that the dead African, a political refugee due to his participation in a street demonstration, had been beaten by one of the security guards. Clearly uncomfortable, Mateo turns her away. He will struggle with his conscience until and during the official hearing into the death, torn by his loyalty to his fellow officers and what he knows is the truth. Miguel, the wielder of the club, assures him that it is their word against the refugees, so they need not fear. It is the old story of Authority assuming it can get away with anything.

Adu bonds with Massar as they struggle to survive, the teenager coming down with such a dangerous illness that a medic urges him to go to a hospital right away. Knowing that Adu depends on him, Massar refuses. One day the little boy plaintively asks, “Are you going to die too?” His loyal friend assures him that he will stay with him. In Morocco, Massar comes up with a risky plan for getting around the towering fence. Tying two inner-tubes together, he will tow his friend while swimming from Morocco to Melilla. There he hopes they will find sanctuary.

Gonzalo has left Cameroon with his daughter—and with the bicycle—for respite in his luxurious Moroccan quarters before moving on for a job interview in another country. Sandra still seems bent on self-destruction through drink, drugs and sex, so the exasperated father decides to send her back to her mother. He expresses his regrets, and she walks with the bike and wheeled suitcase toward the border. At the checkpoint she will be relieved and thankful for her father’s hectoring her over her drugs, and just maybe head her life in a new direction.

Meanwhile Mateo and his comrades face the enquiry, which goes, as Miguel had expected, in their favor. Mateo looks into a room where the compassionate lawyer is talking with the dejected refugees who have been denied justice. He leaves their celebration at a restaurant, unable to enjoy their victory. Later, out at sea, where Adu and Massar become separated due to the fraying of their decrepit tow rope, Mateo is in a patrol boat that Adu. Th satisfaction of saving a life will sooth his wounded conscience.

Although there is some coming together of the three stories, it is slight. Three different and unequal worlds are depicted—that of Gonzalo and Sandra, the well off, privileged Europeans who can cross borders because they have papers and money, contrasted with the impoverished Africans who cross borders without documents, and thus illegally, to save their lives—and in between them status-wise, the low-paid government agents whose purpose is to protect the privileged from the poor. Not a pretty or reassuring picture, and yet one that we who are among the privileged need to see.

Director Salvador Calvo and writer Alejandro Hernández side with the writers of the Bible in their compassionate depiction of Adu and his family and staunch friend Massar. (Do a word search for “poor” or “oppress” in a digital Bible, and you will find dozens and dozens of passages which show either God’s concern for the wretched of the earth or his commands that the well-off come to their aid!) The film’s makers do not preach, they just show us their plight and their utter lack of power, other than their strong will to survive.

The young actor playing the title role is incredibly good, his innocent eyes filled with suffering and his tiny body showing his vulnerability. The photography captures the beauty of Africa, but also the intense squalor of the slums and the festering misery of a refugee encampment. There is no happy resolution to the story of Adu and Massar, such as for the Sudanese refugees in The Good Lie. The filmmakers do not the intend to make us feel good. The film informs us at the end, “In 2018 70 million refugees left their homes searching for a better world. Half of them were children.” Adu and Massar put a face on those statistics, and hopefully their images implanted in our minds might move us to support government and NGO efforts to reach out to refugees.

Many Americans, especially those supporting the erecting of a wall along our own southern border, will agree with Miguel, the club-wielding security guard, who tells Mateo, “When the Africans see that fence, they think it says ‘You’re not welcome’… Do you know what it really means? ‘Solve your own problems.’” Surely viewers who believe that we are our brother’s keeper can do better than this.

Three stories set in Africa are entertwined--a 6-year-old Cameroon refugee boy flees from poachers who have killed his mother; a border guard struggles with his conscience when a colleague causes the death of a refugee; an animal rights advocate struggles with his temper and his druggie daughter.
Editor Rating ★★★★★4.5 out of 5
More Details