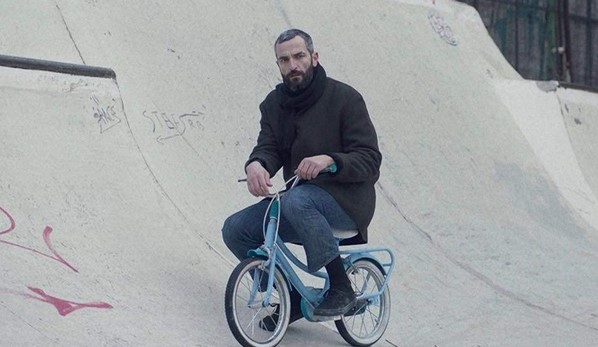 He has put my family far from me,
and my acquaintances are wholly estranged from me.

My relatives and my close friends have failed me;    the guests in my house have forgotten me…

Christos Nikou’s film about a man suffering from loss of memory left me puzzled (might as well admit it up front) but intrigued. Thus I can’t join in the universal praise it has elicited. This is another film I need to see again.

It opens with images of an apartment and its contents, including a dress hanging in the closet, accompanied by a thumping sound, soon to be revealed as caused by his hitting his head against the wall—perhaps caused by the absence of whoever shared that double bed. Our protagonist, a middle-aged Greek named Aris (Aris Servetalis) sits and stares at his double bed while listening to Simon and Garfunkel’s “Scarborough Fair.” The song gives us a clue to the man’s state of mind, as any movie lover will recall that this song was featured prominently in Mike Nichol’s classic film of loneliness and alienation The Graduate. Aris is much older than the freshly graduated-from-college Benjamin Braddock, but something has happened that makes him just as alienated.

That something is a mysterious pandemic that erases the memory of its victims. Aris falls asleep on a bus, and when it reaches the end of the line and the bus driver wakes him up, he does not remember anything. The amnesiac has no ID, so the experienced driver calls an ambulance. Aris languishes in the hospital’s “Disturbed Memory Department,” because no one comes to enquire about him. He is enrolled in a rehabilitation program designed to help him regain his bearings. He is taken to an apartment, given a tape recorder and, like the agents in Mission Impossible, given a tape cassette with instructions for what to do during the day. He is to record the incident by a timed selfie, using a Polaroid camera. The picture is to be mounted in an album which a pair of doctors will examine, and then a new tape is given with instructions for the next assignment.

The assignments, which Aris carries out with a sense of detachment, include riding a bike (does his mind and muscles still “remember” how?); attend a costume party;  take in a movie; drive a car outside of the city; visit a dying patient in a hospital; and, from a moral standpoint the most bizarre, meet up with a woman and have sex with her in a bathroom. His choice of costume at the party highlights his detachment—he dresses up in an astronaut’s suit, the sealed helmet’s visor so darkened that it prohibits conversing with anyone. He can see through the dark-tinted visor, but others cannot see his face very well.

At the movies he encounters Anna (Sofia Georgovasili), also enrolled in the rehabilitation program. The Texas Chainsaw Massacre is showing, so one might wonder why Nikou and his co-writer chose such a violent film  He would have walked on from the theater alone but for her determined efforts to connect with him. He does enter into a relationship with her, accompanying her on her own task of driving a car, one that ends in an amusing way. So, we think the film is about to follow the familiar arc of a romantic movie.

Aris, however, remains as deadpan, unconnected as ever, even ignoring her ringing his doorbell as he pursues his own assignments alone. The one consistent thing seems to be the apples which he peels and eats after buying them by the sack-full. But then one day while he is deciding what kind to buy, the greengrocer tells him that apples are good for the memory. Aris replaces them with oranges. What is going on here? Is his amnesia more an act of his will than a disease? What is he trying to forget? (After writing this I have come across one of several posters for the movie which has the tag line, “How selective is our memory?”) Who really is this man who does not want to connect with anyone in an intimate way.

The film ends abruptly without giving us many clues, though some believe they have figured this out. But the filmmaker and the actor playing Aris never, for me at least, never delve into the depth of his humanity. Other than a blank slate upon which he is to build new memories, who or what is he? Are we not the sum of our memories—of relationships with others who have influenced and taught us, along with the “slings and arrows” of our daily experiences? Maybe that is all that the filmmaker is attempting to do in his admittedly intriguing film. If so, he has achieved his goal of getting us to think about such matters. This is a film that certainly causes me to give thanks for the gift of memory—of the good and of the bad.

Afflicted with amnesia along with many others, a man submits to lengthy therapy, but is he trying to forget a terrible past?
Editor Rating ★★★★★4 out of 5
More Details