Fear and trembling come upon me, and horror overwhelms me. 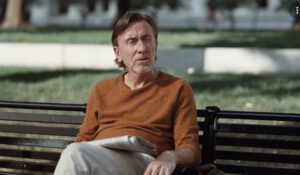 Writer/director Andrew Semans surely knows that one doesn’t have to bring in the supernatural or outer space monsters to create suspense and horror. His tale of an abused woman will curdle the blood, especially in an almost unwatchable scene near the end of the film. And his use of a religious term that brings hope and joy turns its meaning on its head with the film’s grim conclusion that some will find confusing. (This is very different from Ellen Burstyn’s 1980 film of the same name that does explore the religious implications of the title.)

Rebecca Hall plays Margaret, a well-groomed executive in Albany New York who goes about her life very methodically. She seems to have a good, though over-protective relationship with her soon to be 18-year-old daughter Abbie (Grace Kaufman), as well as with her young intern Gwyn (Angela Wong Carbone) to whom she offers helpful advice about a relationship with a toxic male. A single parent, Margaret is carrying on a loveless affair with a co-worker Peter (Michael Esper).

Her orderly world changes when she is at a boring lecture and her eye settles on a bearded man on the other side of the semi-darkened room. She begins breathing heavily. Gets up, now hyper ventilating. She leaves the room and walks out of the building. When she returns home, her daughter Abbie can see that her mother is upset, but Margaret pretends that all is well. During one of the mother-daughter scenes Abbie shows her a large tooth wrapped in a handkerchief in her purse, and when Margaret asks where it came from, the girl replies that she doesn’t know.

A little later, as Margaret sits in a park, she sees the man again. She gets up and approaches him, demanding that he leave her alone. At first he feigns not to know her, but then reveals that he does know her name and that she has a daughter named Abbie. More bizarrely, he claims that the son she abandoned so long ago lives in his belly! When he smiles, he reveals that he has a missing tooth. If Margaret and the soundtrack didn’t give you shivers already, this should!

We learn that the man’s name is David Moore (Tim Roth) and that it has been 22 years since Margaret had run away from him back in Canada, her fear and remorse so great that she had left to start her life over again in a new country. Now she becomes morose and paranoid, fearful that he will harm Abbie.

In an Oscar-worthy monologue Margaret shares her backstory with Gwyn, revealing that the affair began when she was just 16 and David had been so charming that he won over her mother and father. But then his good treatment soured as he took control of her life, making outlandish demands of her—“kindnesses” he called them—both sexually and in other ways. They had conceived a baby, but David could not abide any rivalry for her affections, so while she was away, he killed and ate it. (Yes, you are reading right.) He tells her that their son is now inside him, calling out for her. Thus Margaret has been filled with guilt that she was not able to protect her child. Unfortunately Gwyn is too young and inexperienced to offer help, leaving her mentor in shock and dismay.

Margaret does go to the police, but David has prudently kept his distance, and when she tells the officer that he has not approached or touched her, he has to tell her that there is nothing to be done within the law. Get back to him if David actually does something to her.

Margaret meets with David several times, showing that she is again under his control. When he orders her to walk barefoot to work, she does, putting on her shoes only as she approaches her office building. But we see that this time her giving in is not so much fear for herself but for Abbie. She threatens David, and with Abbie, she becomes as controlling as David is with her. The girl, perplexed because her mother refuses to reveal the source of her paranoia, of course rebels. She points out that her 18th birthday is almost there, but Margaret apparently cannot conceive of her as a young adult.

Margaret’s inner turmoil is reflected in the deterioration of her appearance as the plot advances. She has a nightmare in which she hears someone knocking at her window, and then she notices smoke seeping from her oven. What can be burning? Opening the oven door, she is shocked to see that it is a baby.

Margaret pulls out from its hiding place a gun, determining that she will end the threat to Abbie and herself. The result is an incredible climactic scene very disturbing to watch—unfolding in a gruesome way we do not expect, but perfectly in accord with the terrible paranoia driving the distraught woman.

The final scene with her and Abbie is so blissfully domestic that it seems too blissful, too good to be true. That it no doubt is we see as the camera focuses upon Margaret’s face, contented-looking at first and then her expression changing, as she seems to see something, something very much at odds with her happy setting.

This is a film, like most horror films, that should be seen with others. I think any confusion over the bizarre ending can be cleared up by someone pointing out that it is very important in a film to know what the POV of a shot is. Often it is an omniscient one, showing us the scene from an all-seeing eye or as if we were present with the characters. But some scenes are from that of one of the participants, something which Akira Kurosawa showed so well in Rashomon, the tale about a rape told inf four different segments by the four people present. Often the POV is emphasized by an odd camera angle or blurring of focus. The latter is not the case here, but I think still it is important to reflect upon Margaret’s state of mind in her final confrontation with David.

There have been many films about a man abusing a woman, but none that I have seen as horrifying as this one. There are no flashbacks to the horrid details of David’s abuse of Margaret, but her speech to Gwyn is enough. Andrew Semans focuses upon the long-term effects of abuse, not the incidents of the abuse itself. And, as we see, it can be as horrible as any tale of human cruelty. Rebecca Hall and Tim Roth bring their considerable talents to this parable of human abuse and lostness. It is a film that will linger for a long time in your memory.

A career mother raising her daughter alone spots the man who long ago abused her and now cautiously stalking her.
Editor Rating ★★★★★4 out of 5
More Details