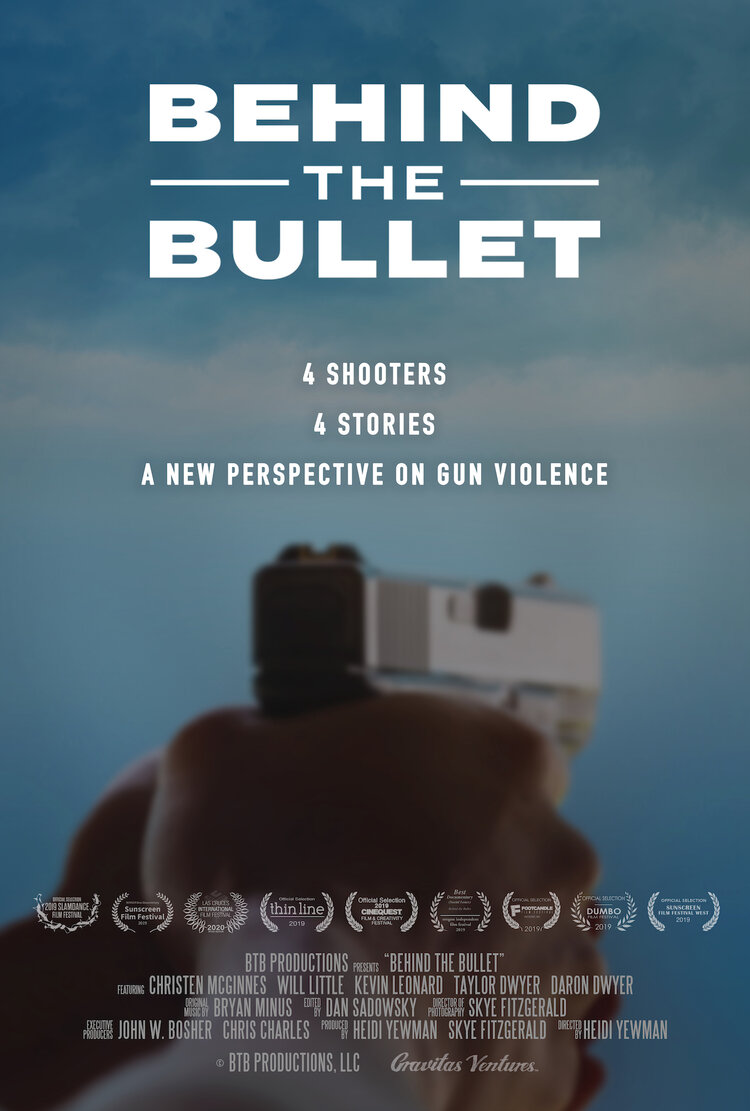 “Therefore I will not restrain my mouth; I will speak in the anguish of my spirit; I will complain in the bitterness of my soul.

Heidi Yewman’s 2019 film takes a different tact from the other films dealing with gun violence—at least from the ones I have seen thus far or know about. She tells the story of–or rather, lets the instigators speak for themselves—four people who pulled the trigger on a gun that snuffed out the life of another person. Or, I should say, in the case of one of them, almost took the life.

The director herself on the film’s website describes why she made the film:

“I made Behind the Bullet because I wanted to know what it feels like to be the “good guy with a gun.”

I wanted to look at gun violence from a different angle. I wanted to get past the hyperbole and the entrenched arguments and instead explore a viewpoint nobody thinks about: what happens when you use a gun for the purpose that it’s designed for – to shoot someone.

The Columbine High School 1999 massacre is where it all began for me. I graduated from Columbine 13 years before the shooting and one of the victims was my former basketball coach Dave Sanders. As I sat at his memorial service watching my traumatized teachers weeping, one of the speakers said, “We can’t control what happens. But we can control how we respond.”

After that, I got active.

That led me to write a four-piece series for Ms. Magazine, My Month With a Gun where I carried a 9mm Glock with me everywhere I went so I could experience the emotional and physical ramifications of always being prepared to defend myself and my family from a bad guy.

That experience evolved into Behind the Bullet. The four stories in my documentary focus on common gun violence situations – suicide, accidental child shootings, street crime, and the widespread fear of a home invasion.

The four people tell in moving detail how and why they pulled the trigger. They are:

-Christen, who only gradually reveals that she had tried to kill herself with a handgun. She awoke, she says, glad to be alive, and has found the courage, and support from loved ones, to undergo a series of almost four dozen operations to repair the extensive damage the bullet did to her face. In several scenes we see that her surgeon possessed skills in human relationships as well as those of his profession.

-Will, now a Black barber who has found a new life after serving a sentence for shooting another youth. He describes his work now with youth and of the experience of being forgiven by the brother of the boy he had killed. We also see and hear from Will’s friend who was the mediator between will and the brother.

-Kevin is a fisherman/hunter who shot at two intruders who broke into his home one night. One got away, but the other one he shot and lay bleeding away at his feet. The young man died before help arrived. Kevin feels justified and yet also remorseful.

-Taylor was a little boy when he found a handgun his mother had forgotten to lock up. Playing with it, he shot and killed his older brother Matthew. We see a great deal of his father how apparently is a song-leader at their church (United Methodist apparently, as we see the symbol for that church in the background during one segment). The father speaks of avoiding blaming anyone, focusing instead on forgiveness and healing. From Taylor and the father’s words it is evident that faith in a loving God played an important role on the family’s  road to healing, though memory of the horrible event can never be erased entirely. Taylor speaks of his goal of being the best older brother for his remaining brother that he can be.

The film is less than an hour and a half in length, and yet Ms. Yewman has elicited so much descriptive testimony from her interviewees that we feel privileged to have been let into their inner lives. This is a film that provides few statistics, focusing instead upon the human cost of guns and the mayhem they produce. These are four people whom you will long remember, and will be thankful that you do. The news media, as they are now doing for the massacre of the 21 students and teachers in Texas, will tell us the stories of the victims of gun violence. It is also important to know those of the persons who pulled the trigger.

This film about gun violence in that4 people who pulled a gun's trigger tell their stories in graphic detail.
Editor Rating ★★★★★5 out of 5
More Details