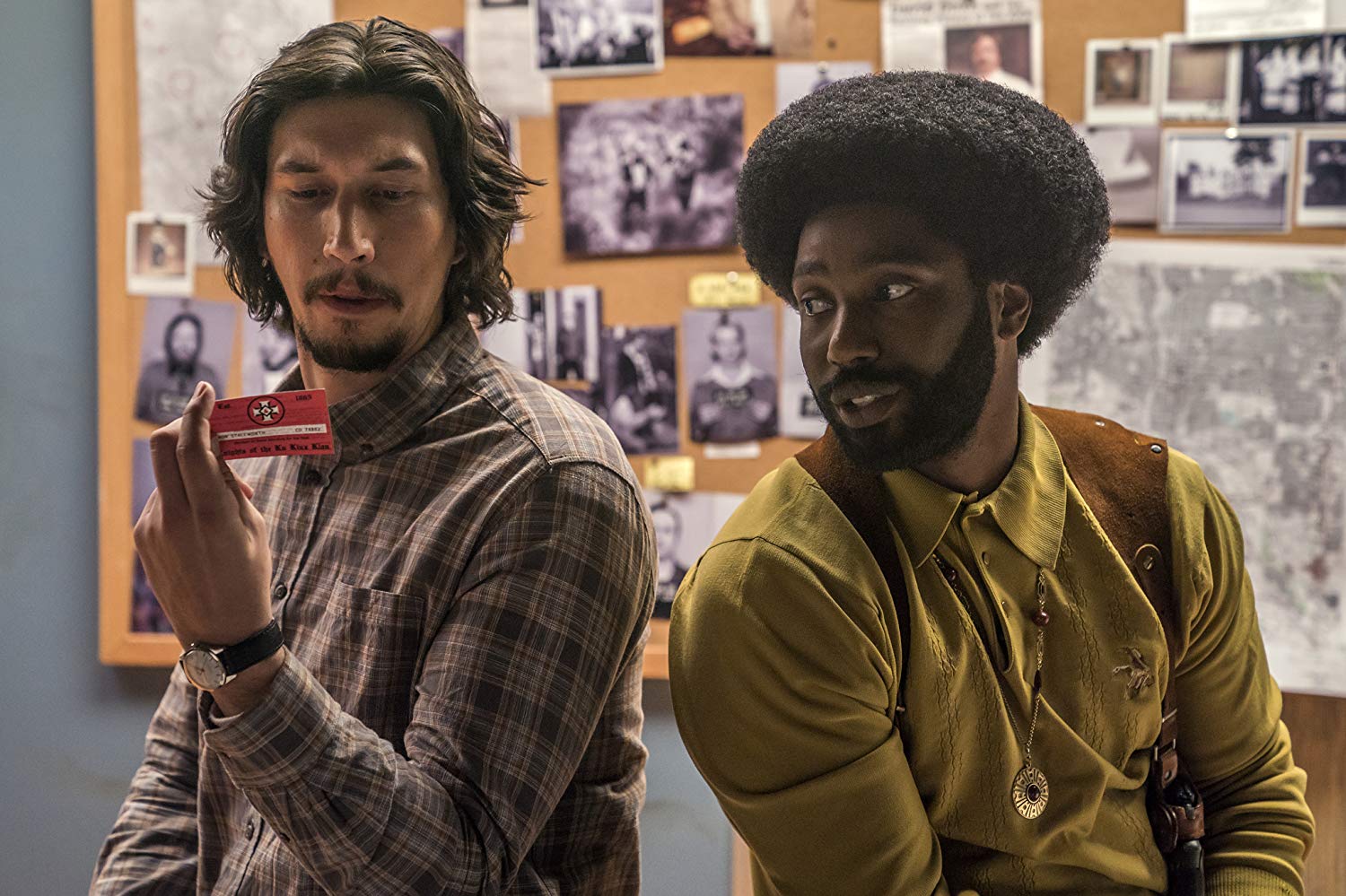 The Samaritan woman said to him, ‘How is it that you, a Jew, ask a drink of me, a woman of Samaria?’ (For Jews have no dealings with Samaritans.)

God that made the world and all things therein, seeing that he is Lord of heaven and earth, dwelleth not in temples made with hands; Neither is worshipped with men's hands, as though he needed anything, seeing he giveth to all life, and breath, and all things; And hath made of one blood all nations of men for to dwell on all the face of the earth, and hath determined the times before appointed, and the bounds of their habitation

Based on the memoir of policeman Ron Stallworth, Spike Lee has written and directed one of the most important films of the year. It is billed as a comedy, but its purpose, as evident by the jarring ending that consists of extended shots of the events at Charlottesville, Virginia in 2017, is very serious. Mr. Lee provides plenty of lines that induce laughter, as well as many references to blaxploitation films, but also plenty of material—such as a powerful speech by Harry Belafonte’s Jerome Turner describing a gruesome lynching he had witnessed in 1916—that informs the audience of the history of racism in America during the 20th Century.

The very idea of a black KKK member seems funny at first, though Hollywood did produce in 1966 a film, The Black Klansman¸ about a light-skinned black father joining the Klan to seek revenge on the Klansman who murdered his daughter.

Lee opens his film with a famous shot from Gone with the Wind of Scarlett searching for her beloved amidst a huge crowd of wounded Confederates laid out on the ground at Atlanta’s train terminal, followed by a bigot being filmed warning of the danger of the “mongrelizing of the pure white race. We also will see scenes from the racist D.W. Griffith production Birth of a Nation, scenes alternating between stereotyped images of blacks and the heroic KKK rescuing white maidens from being raped.

Ron Stallworth (John David Washington), in answer to an ad encouraging members of minority groups to become cops, submits to a humiliating interview by the chief of police of the Colorado Springs PD and a black member of the Mayor’s staff. If his black skin doesn’t set him apart, his huge Afro hairstyle certainly will. Facing daily racial slights from fellow cops while working in the records department, he soon is asking Chief Bridges (Robert John Burke) for a transfer. He is put off until the Chief learns of the Colorado College Black Student Union’s invitation to civil rights leader Kwame Ture (Corey Hawkins) to speak at an upcoming meeting. As the only black cop Ron is the right person to infiltrate the audience and learn more about what are dubbed “a bunch of subversives.” Ron has mixed feelings about spying on his own people, but he cannot refuse his first assignment.

Outside the meeting hall Ron schmoozes with the president of the group, the gorgeous Patrice (Laura Harrier), who will remind older viewers of the fiery (and notorious, for whites) Angela Davis, both in her Afro-style hair and her talking points during their later arguments. She refuses to let him jump the line, but we know they will be thrown together later.

Corey Hawkins is an inspiring Kwame Ture, perhaps better known to whites by his birth name, Stokely Carmichael, before he became a Black Panther leader. The inflaming speech is about blacks learning to love themselves and asserting “Black Power,” ending with an intriguing personal story about how Hollywood had brain-washed him when he was a boy into rooting for the white Tarzan against the “black savages.” It is important to remember that the setting is 1972, a time when “Black is Beautiful” was a fresh, and necessary, message for blacks after three centuries of white disparagement of blackness.

While continuing to meet with Patrice and conceal his work as a cop, Ron sets up his next assignment himself when he reads a KKK recruitment ad in his local newspaper. He uses his “white voice” (shades of Sorry to Bother You!) on the telephone to ask for information. This is when he seeks out fellow cop Flip Zimmerman (Adam Driver) to be his white alter ego. The senior cop is not keen on pairing off with the rookie, but he gamely proceeds. There follows a series of encounters, with one Klansman especially suspicious of Flip. In one dangerous episode Ron, listening in via the concealed microphone on Flip, dashes to the rescue, almost blowing their cover.

Matters become even more amusing and complicated when Ron calls Grand Wizard David Duke (Topher Grace) on the telephone, completely fooling him as well, even though later Duke assures him that he can tell a black voice from a white one. Duke is so impressed by Ron that he expedites the delivery of his KKK membership card and says that he will look forward to meeting him when he flies up to Colorado Springs for their rally.

One unmistakable reference to our present day is triggered by Duke’s telling Ron that he is going to run for political office. Once elected, he says, he can convince people of the rightness of his white nationalist cause. In a conversation (I don’t recall whether with Flip or Patrice) Ron says that surely people would never vote in at a national level such a prejudiced candidate.

Also intriguing is Ron’s running debate with Patrice about changing the racist system, Ron believing that it can be done from within, and she that it is impossible, that things can be changed only by overwhelming pressure from outside it. She has completely bought into the view of radical black activists that only a revolution can change society. Ron, as a newly minted cop, could never conceive then how, even with many blacks joining their ranks, policemen would continue to shoot and kill black males with few ever being punished.

The development of Flip Zimmerman’s character is also of interest. He begins as a non-observant Jew who has ignored, if not concealed, his Jewishness, never giving it a thought.” Now,” he says, having been accused of being Jewish by the suspicious KKK member, “I think about it all the time.”

The film ends on a positive note, its happy ending even having Ron and Flip with their white colleagues exposing the racist white cop who had roughed up Patrice and Kwame Ture, as well as making life difficult for Ron, but this does not mean that Lee is just trying to please his audience with a fantasy ending. He brings us up to the present by adding on to this fictional episode the documentary footage of the tragic events at the Charlottesville, Virginia, white-power rally and counter protest, including the car assault that resulted in the death of Heather Heyer. I have seen most of this before but seeing it on a large screen drove home the ugliness of it even more, especially the clip of the President of the U.S.A. refusing to take sides. How far we have sunk since that memorable night in 1965 when President Johnson declared in his televised speech, “We shall overcome”!

The film maker performs a real service to our nation, the history lesson within it revealing how pervasive white racism has permeated our society. Few will have known that Birth of a Nation was the first feature film to be screened at the White House, with the racist President Wilson praising it as “history written with lightning.” Lee includes a generous number of scenes to show us how lurid the film is, and how it resulted in the rebirth of the KKK during the following years.

Lee also renders a service by showing that racism is not a regional problem, Colorado Springs, where the KKK was gaining strength in the 70s, being hundreds of miles away from David Duke’s Louisiana. Racism is an American problem, and so my hope is that people of faith will go to great lengths to get everyone they know to see and discuss this important film.