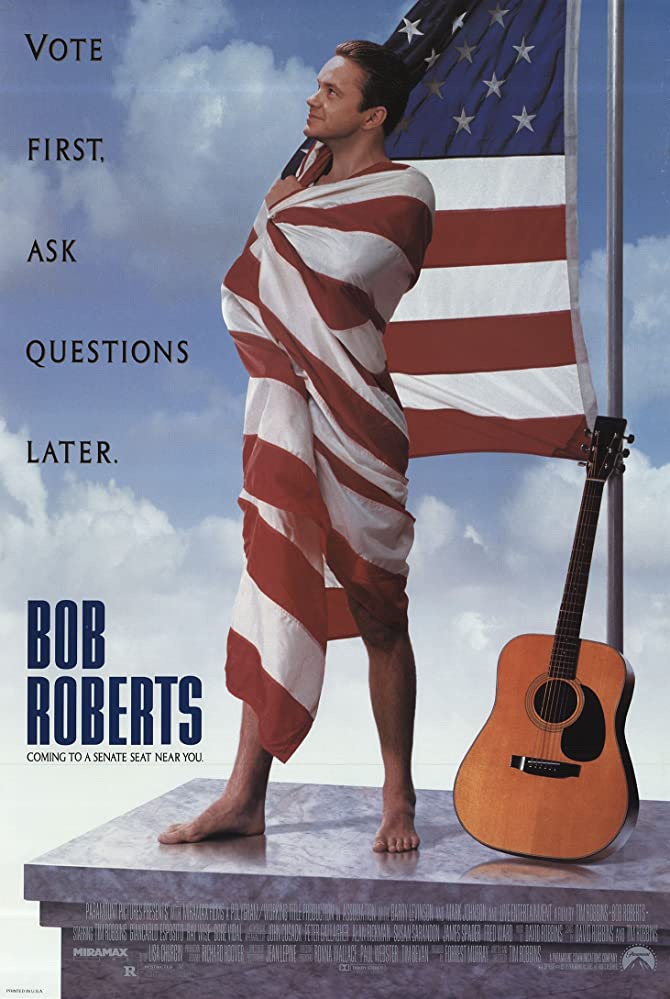 This review is from the October 1992 Visual Parables, when another political campaign was underway. I reprint it here (with the addition of a related Scripture passage) for two reasons. It is still relevant, and while watching a soon-to-be-released film, Tim Robbins came to mind. The new film is Irresistible, Jon Stewart‘s comedy drama sending up the American political system’s dependency on vast amounts of money. Though I have written the review, we cannot print it until June 22 due to the studio embargo.  It is scheduled to be released on various streaming venues on June 26. All I can say now is that if you have an open mind, you will enjoy it, whether you are a Democrat or a Republican. Until then, enjoy this 1992  dark, marvelous spoof.

A lying tongue hates its victims,
and a flattering mouth works ruin. 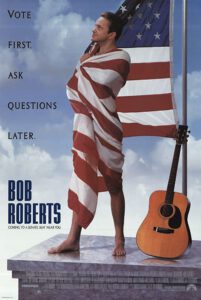 This crazy political satire takes on added meaning during the current election campaign , when appearance dominates over substance. Imagine a combination of Pat Buchanan and Bob Dylan, and then add a touch of Jim Baker’s cherubic face, and you have Bob Roberts, right-wing folk singer who plays on his popularity to propel him into a race for the Senate in Pennsylvania.

Tim Robbins, who co-wrote and directed this dark comedy, is incredible as the pop star turned politico. Not since Network has a satire been so devastatingly on the mark in holding up our media-saturated society to close scrutiny. The film is shot in a documentary style, so that we get the feeling of being on the campaign trail with an actual candidate. And it can be said that only in America could such a person as a Bob Roberts gain the fanatical allegiance of so many by putting into catchy, singable songs all the middle-class myths and stereotypes of the have-nots — blacks, homosexuals and welfare-receivers.

Like JFK, this is a film that seeks to stir the viewer to ask Pilate’s old question, “What is truth?” – and it suggests that we definitely will not find it in the media or the speeches and posturing of our political candidates. I believe that Bob Roberts actually packs more punch than Oliver Stone’s film because it is up-front that its main character is fictional. We do not become embroiled inside issues as to whether certain incidents actually happened, the result being that we can focus on the main theme and ask, “Is this really what is happening to political discourse in our society?” When we come away from this  film and listen to our actual candidates present their carefully honed sound-bytes on our TV screens, most of us will conclude sadly that this fictional film has the ring of truth to it.

Teaching/preaching moment: Near the end of the film the camera slowly scans the words of Thomas Jefferson chiseled inside his Memorial. “I have sworn on the altar of God eternal vigilance against the tyranny of the mind.” Cut to a newscast , in which it is announced that Americans endorse the war against Iraq.

I have no plans to add discussions and include this in the journal.

Bob Roberts is an unscrupulous politician who uses folk music to fool the public into supporting his bid for political power.
Editor Rating ★★★★★5 out of 5
More Details