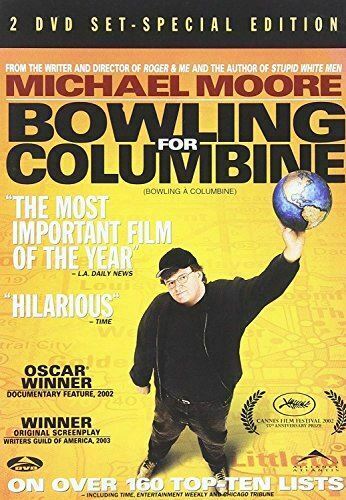 Although Michael Moore’s most successful documentary is almost 20 years-old, it is unfortunate that it is as relevant today as it was in 2002 when I reviewed it in VP, thanks to the horrible tragedy in Texas. In addition to this old review, I will be posting at least two others–one of a TV documentary 91% : A FILM ABOUT GUNS IN AMERICA and a 2010 film about two parents coping with the news that their college student son has shot a number of people and then committed suicide, Beautiful Boy.

Do not enter the path of the wicked, and do not walk in the way of evildoers.


Ah, you who call evil good and good evil,

who put darkness for light and light for darkness,

who put bitter for sweet and sweet for bitter!


“The words of the prophets are written on the subway walls, 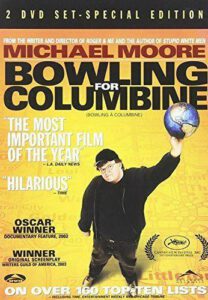 Michael Moore’s 1989 documentary Roger and Me much have evoked envy as well as admiration in the hearts of other documentary filmmakers because of its huge success at the box office. Taking on the issue of corporate irresponsibility and indifference to the suffering caused by the economic decisions of the head of General Motors, that earlier film focused on Moore’s hometown of Flint, Michigan, then an impoverished ghost town after GM’s auto plant fled for greener pastures (meaning cheaper labor). The director tackles an even bigger issue in his latest film, that of the violence that seems endemic to the United States, and which has repercussions not just in this nation, but throughout the world because of our super power status. No wonder that the people who run the Cannes Film Festival broke their 46 year long bias against documentary feature films and admitted this one, eventually giving it a special 55th Anniversary Prize at the 2002 festival. Mr. Moore assumes the mantel of prophet in this film, adding his voice to the rising chorus decrying our penchant for violence and the practice of our elected leaders bowing to the pressure of the NRA. Although the film’s title focuses on the terrible tragedy at Columbine High School, our film prophet returns to his beloved Flint after taking us on a whirl-wind tour of Canada and Oklahoma City.

On screen Michael Moore looks more like a shaggy teddy bear than a fiery prophet out of the pages of the Hebrew scriptures. But when he manages to confront such people as officials from K-Mart or Charlton Heston, the president of the National Rifle Association, his legendary confrontational style allows for no beating around the bush or squirming out of the situation on the part of those being questioned. CBS’s Mike Wallace might appear to be more aggressive than the gentle-mannered Moore, but he is no more dedicated to arriving at truth and justice than our filmmaker. Bowling For Columbine makes no pretense at objectivity. Its maker has a point of view, and its one that Christians would do well to examine and, I would hope, to embrace. This is a film that really does matter, especially now when our nation is lead by those doing what Moore charges is a major part of the cause of violence in our schools and elsewhere, namely using fear to build support for aggressive policies abroad and at home. (Yes, this film moves beyond entertainment into the political and social realm—some would call Moore a meddler!)

The film’s title comes from the fact that the two teenage murderers at Columbine High School played an early morning bowling game before setting off on their rampage of violence. The title might lead you to believe that the film is just about the tragedy of that day. It does include terrible scenes captured by the school video surveillance system and frantic voices from 911 and other phone calls made during the event, but it ranges far beyond Colorado. Included are some telling interviews with Canadians as Moore compares the two nations in regard to guns and violence. This latter is especially intriguing, knocking down the argument of some liberals who facilely preach that getting rid of guns will solve the problem of violence. Moore, actually a member of the NRA himself, points out that Canadians are fervent hunters and possess as many guns per capita (if not more, I don’t remember the statistics) as Americans, yet suffer but a fraction of the murders as the latter. Indeed, he checks the statistics in many other nations, including Germany (he evokes its Hitler-dominated past), and notes that each has a relatively low number of gun deaths, whereas the USA suffers well over 11,000 such deaths each year. Why the difference?

During his research Mr. Moore noticed some interesting coincidences. Actor Charlton Heston came from a Michigan community not far from his own Flint, Michigan. Eric Harris, one of the two Columbine shooters had lived on a nearby air force base, and Oklahoma City bomber Timothy  McVeigh’s partner in crime Terry Nichols went to the high school near Moore’s. This intrigued the filmmaker so that his filmed investigation ventures far beyond the Columbine shootings. There is an animated section that presents a view of U.S. history we never saw in high school. A “bullet” narrates, in a way similar to that of the Cigarette in “Doonesbury,” the story, beginning with the Pilgrims who came to New England to escape persecution but then out of fear began persecuting one another, killed off the Indians, fought the British, and so on. When this South Park-like segment ends, Mr. Moore himself picks up the story with the invention of the Colt revolver and how improved guns kept the slaves in check in the South and helped us win the Indian Wars in the West. All with the blessing of the 2nd Amendment to the Constitution, of course.

Along with savage satire and horrific scenes from Columbine we see some touching ones, such as Michael comforting the school principal in the Flint school where a six year old boy has shot and killed a classmate. The woman, choked up while telling the story, has to pause a while so that she can contain her tears. Michael embraces and pats her, reassuring her. In another sequence he accompanies two students injured at Columbine High School, one of them paralyzed in a wheel chair, to the Michigan headquarters of K-Mart. They single out this company because the teenaged killers had bought their ammunition in a K-Mart. The company sends down the human resources director to meet with the small group in the corporate lobby. Insisting on seeing someone with real authority, Michael agrees to come back the following morning. In the meantime, following one of the student’s suggestions, they go to the local K-Mart outlet, where the students are able, even though teenagers, to buy up all the ammunition in the store. The next day they bring this to the lobby meeting. This time Michael’s camera crew is joined by those from local television stations. The vice president agrees to the visitors’ demand that K-Mart stop selling ammunition. Michael and the students can scarcely believe this. A small victory in the scheme of things, but a heartening one nonetheless.

Bowling For Columbine shows that an important social issue can be presented with humor as well as passion. While we laugh, the serious point the film prophet is making takes hold, and unless we have taken Charlton Heston’s vow to cling to our precious guns even in death, we might be open to the truth of his points. This is not an anti-gun film, and gun control advocates would do well to continue to reassure hunters that they are not out to eliminate all fire arms, but it is an anti-fear mongering film, and thus anti-violence. Churches and resource centers would do well to purchase or stream the video and show it to every member.

This documentary begins with the Columbine HS massacre and includes a look at the NRA and an animated, Doonesbury-like history of the role of the gun in US history going back to the Pilgrims.
Editor Rating ★★★★★5 out of 5
More Details