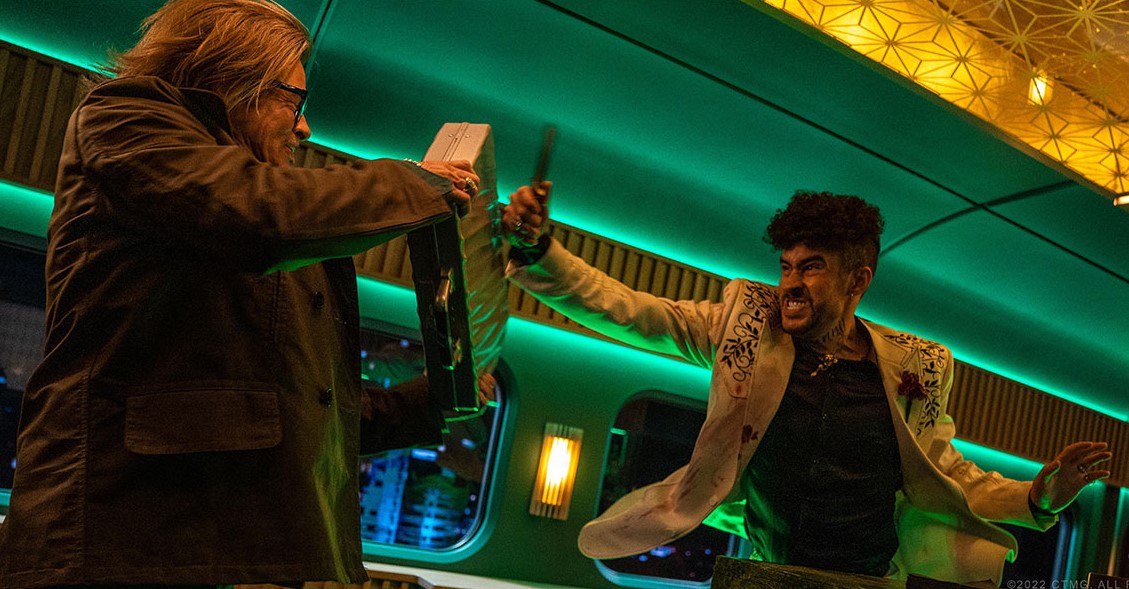 For I hear the whispering of many— terror all around!— as they scheme together against me, as they plot to take my life.

Director David Leitch knows how to keep things movie fast, just like the sleek Japanese train in the title. There should be enough action with blood and gore, laced with considerable humor, to keep the attention of the almost ardent action fan. Based on Kotaro Isaka’s novel Maria Beetle, it centers on a man with the peculiar name of Ladybug (Brad Pitt)

Ladybug is hired by his handler Maria (voiced by Sandra Bullock—we get to see her only at the end of the film) to board the Tokyo to Kyoto bullet train, snatch a silvery briefcase, and then disembark at the next stop. Ladybug is retiring, wants no trouble, so he does not take his gun along. The assignment sounds like a piece of cake, but of course complications arise. Otherwise, the film would run way under its two-hours plus length. And who wants to spend $10 on a 15-minute movie—you could consume your bag of popcorn in that amount of time.

Those “complications” include a club car full of nasties who also have designs on the money and gold bars contained in the brief case. The rogues include

These, plus some others who show up, spill a lot of each other’s blood, shed by guns, swords, and blows and kicks. What I never could figure out is how all these characters can get away with such mayhem that the conductor never alerts the authorities. Oh, there is a conductor, who does try to obtain a ticket from Ladybug, and when he can’t find one, there is a running gag with our hero trying to avoid the official. Also, I wondered why there seems so few ordinary passengers on the train, at least one of whom would have a cell phone with which he or she could have informed the police about all the killings. There is one woman in the “Quiet Car” who must be a librarian, because in another sequence she is always shhhing Ladybug and whatever villain he is fighting in the seats in front of her.

Some of the humor does evoke laughter, such as playing on the soundtrack “I’m Forever Blowing Bubbles” during a fight this exchange:

All the fighting and dying occur over at least a day and a night, even though it takes a little over two and a quarter hours for the train to reach Kyoto. But hey, if you want anything realistic, log onto a Japanese tourist bureau documentary. The men slug hard enough to break jaws, and their bodies smashing through windows or upon tables and such, never put them out of commission, just slow them down a bit. And then there’s the snake, a deadly poisonous that of course escapes its cage and then for long stretches seems to have been forgotten. Last of all there’s the crash in which the train, long after the film has done so, goes off the rails in spectacular fashion. Again, in real life all would have been smashed to pulp, the train having reached an excess of 200 mph, but this is Hollywood.

I went because it was a free screening, so no real complaints, but if I had paid to see this turkey, well then…

No discussion questions for this film. I can’t imagine a leader wanting to explore serious issues with this juvenile fantasy—other than comparing it to other action blockbusters in a discussion of why such unrealistic fare is so popular.

A simple job of stealing a briefcase full of money turns out to be a huge struggle against a small army of killers for an American hit man on the Tokyo-Kyoto bullet train.
Editor Rating ★★★★★3.5 out of 5
More Details