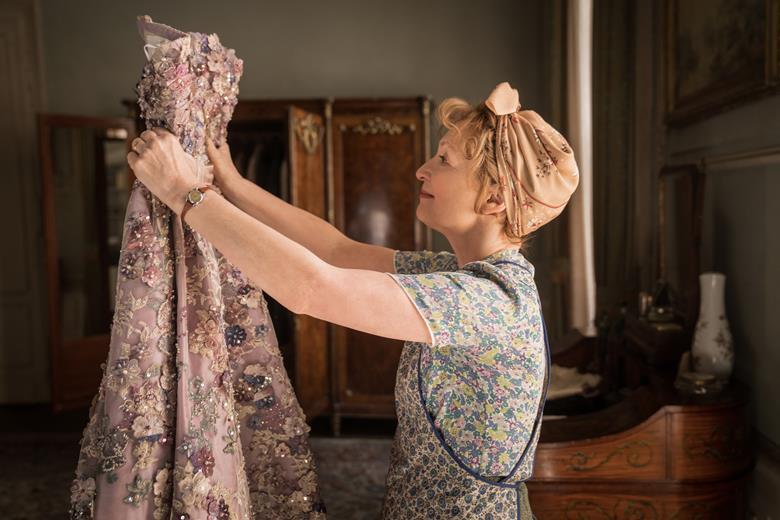 
But many who are first will be last, and the last will be first.

American born, but living in London, Anthony Fabian makes a smooth transition from documentary films (Good Hope and Embracing the Tiger) to fictional film in this charming visual parable of grace. The story of a lowly British cleaning woman fulfilling her dream of owning a Christian Dior dress is a wonderful Cinderella story that will leave you feeling very good about the world and (most) of its inhabitants, even if a cynic might write it off as PR for the House of Dior.

Ada Harris is indeed “humble-minded,” “claiming nothing” in that she and best friend and neighbor Vi Butterfield (Ellen Thomas), an immigrant  from the Caribbean, arise early in the morning to take a bus from their working class neighborhood to clean the dwellings of some of London’s well-off families. In Mrs. Harris’s case it is a wealthy bachelor (Christian McKay), Lady Dant (Anna Chancellor), who continually postpones paying her, and the somewhat ditsy starlet Pamela Penrose (Rose Williams).

Mrs. Harris also knows “what sorrow means.” It is 1957 and she still hopes that her RAF pilot husband Eddie, MIA all these years, might somehow return to her. She goes to a bridge at night and speaks out loud to his spirit. Then she at last receives word through a small package containing a letter and a few of her husband’s belongings that he is officially dead.

Mrs. Harris is launched into her dreamworld by the discovery of a gorgeous floral print sequined  Christian Dio dress in Lady Dant’s closet. It is for her about-to-be-married daughter. Ada is too enchanted with the sparkling gown to be enraged at the injustice of the woman spending £500 on a gown while stiffing her employee of her wages. Quite a contrast to the barely-making-it Pamela Penrose, who still manages to pay Ada on time.

Determined to save up from her meager wages enough to buy such a dress, as well as naively thinking she can purchase it as easily as a ready-made one, she starts keeping track in her notebook of her savings, including the £ 50 winnings from the state lottery that she and Vi celebrate. An RAF officer knocks on her door and, after a humorous mix-up, she understands that she will receive a small settlement for her husband’s death. Then comes a set-back.

Believing that Eddie is watching over her and has sent her a sign, she stakes a large portion of her money on a greyhound with very long odds at the local dog race track—this despite the misgivings of Vi and her friend Archie (Jason Isaacs) who man’s the betting booth. Indeed, Archie tries to discourage her, but Ada insists. Just as the dog seems about to fulfill her wish, it becomes lame, and the other hounds race past it, dashing her hopes.

Then it is that we see grace kick in. She has always been supported and encouraged by Vi whenever the two go out together. Now it is Archie who becomes a channel, showing up with a wad of bills a bit later after the racetrack fiasco. He maintains that he actually placed her bet on the dog that won. When she is reluctant to accept it, he insists. The honest Ada also has returned a lost diamond that she found, and a bobby shows up with a reward from the owner—and soon she is on a flight to Paris.

Arriving in the City of Light at night, she encounters a waiting room-full of elderly winos, one of whom tells her “In France, the worker is king,” and several times throughout the movie she encounters workers out on strike—and indeed, we will find her eventually championing this cause. But at the House of Dior, she finds that such workers as herself are not welcome. She manages to get into the building amidst a line of upscale customers because she has picked up the dropped purse of a model arriving late for the big show and followed her up the stairwell. This is Natasha (Alba Baptista), a gorgeous young model who will remind you of Audrey Hepburn. But the gatekeepers such as showroom assistant Marguerite (Roxane Duran) and senior staff member Madame Colbert (Isabelle Huppert) are quick to deny Ada entrance to the showroom. Theirs is not a walk-in store, customers having to receive an invitation! However, when Ada displays her rolls of bills demonstrating that she can pay cash instead of credit, the company’s chief accountant André Fauvel (Lucas Bravo), all too aware that the company is in financial peril, over rules Colbert. Even more persuasive is the chivalrous Marquis de Chassagne (Lambert Wilson), a widower and important customer, who says that she will be his guest. Madame Colbert is hardly mollified, but powerless, even when a snooty mother and her sullen daughter complain they have to sit next to Ada. There follows a fashion show that will delight those interested in the history of fashion, the svelte gowns of which are certain to put costume designer Jenny Beavan into Oscar contention again. (The House of Dio gave her full cooperation in recreating some of their classic designs of the 50s.)

Informed by the Marquis that she should write down the number of any gown that interests her, Ada makes her choice—first a red one named Eden and the second, an emerald green gown named Temptation. Of course, the nasty mother and daughter want Eden, so Ada is left with her second, equally beautiful choice. But when told that it will take two weeks or more to fit it to her body, she admits that she cannot afford to stay in the city that long. They reduce the time to one week, and the kind-hearted André offers her a place to stay in his Montmartre hilltop apartment he shares with his sister, even letting her borrow his sister’s wardrobe while she is out of town.

Thus begins the fittings by day, presided over by the officious head tailor Monsieur Carré (Bertrand Poncet) who becomes upset by Ada’s lack of knowledge of haute couture. But the fitting assistants and seamstresses, all women, take a liking to the unpretentious woman, especially when she proves at one point to be a talented sewer herself, working alongside them. At night Marquis de Chassagne treats Ada to a series of dates that promise to blossom into a romance as lovely as the roses that he gives her—but then he makes a misstep that apparently reminds her of their social gap, and she retreats from the relationship.

Ada gives, even as she receives, becoming the catalyst for the shy André to express his feelings for Natasha. Earlier we had seen her with a copy of Jean Paul Sartre’s massive Being and Nothingness, so we surmise that she is more than just a pretty face. André also is into Existentialism, so the two have more than physical attraction to draw them together.

In addition to becoming a matchmaker, when it is announced that due to economic reversals, a good many of the women must be laid off, Ada organizes them and encourages André to overcome his shyness even further by confronting Christian Dior (Philippe Bertin) and persuading him to change their marketing plan. Instead of drawing in a select few of the rich, he proposes that they  reach out to a larger number of people who are able to afford their gowns.

Ada returns in triumph to her London friends, and does something generous (or should I say grace-like?) with the gown that is very surprising. This leads to disaster, and yet that in turn leads to one more climactic grace-filled event.

What a delightful two hours for romantics, one that easily could have dissolved into a gooey sickening sweetness were it not for the excellent script and the dynamic talent of star Lesley Manville and her fellow cast members. It is more difficult to portray sweet innocence than it is nasty evilness, but this film succeeds beautifully. And Paris looks so gorgeous—the Eiffel Tower, the Arc de Triomphe, and the Sacré-Cœur Basilica especially—and with the help of CGI, the film crew in Budapest turn some its streets, teeming vintage cars and costumed pedestrians, into those of Paris. So, we might also be hearing more about production design Luciana Arrighi come Oscar time.

I have not seen the 1992 TV movie adaptation of Paul Gallico’s novel (starring Angela Lansbury), but I cannot imagine it as being as sparkling and enjoyable. Some have called the new film a “piece of fluff” (though not really in a disparaging way), and it is light fare, but it is so good to come away from a film with the warm feeling that the human race is capable of goodness, that a decent and empathetic woman can influence others to rub away their stains of snobbishness and exclusivity. Maybe there’s hope for us humans after all in a universe in which transforming grace rules.

A humble London cleaning woman's dream of buying a Christian Dior dress inspires her to go to Paris and struggle to make it come true.
Editor Rating ★★★★★5 out of 5
More Details