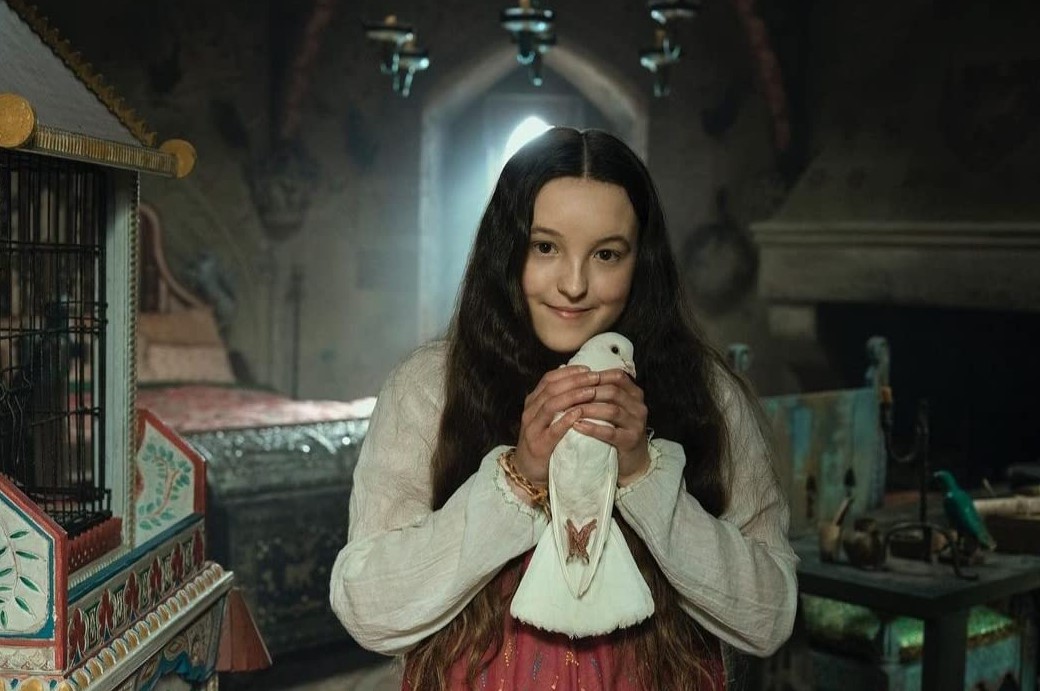 Children, obey your parents in everything, for this is your acceptable duty in the Lord.

Director/writer/producer Lena Dunham  adroitly captures the spirit of the Newberry-winning children’s novel by Karen Cushman. This medieval comedy is almost funny to me as Danny Kaye’s The Court Jester or Monty Python and the Holy Grail. And an added appeal is that it gives us a spirited 14 year-old girl, Lady Catherine “Birdy” (Bella Ramsey) who is a protofeminist to whom our daughters can relate.

The book is in the form of diary, so Ms. Dunham’s adaptation appropriately uses Catherine’s voice over to comment upon people and events. We see that her opinion of her spendthrift father, Lord of the village, is rather low, while she appreciates the kindness of her mother. She has been nicknamed Birdy because she keeps so man birds as pets. When we first see her she is having a great time with friends frolicking in the mud with the goat boy Perkin (Michael Woolfitt)—she enjoys this far more than lady-like needle work. We smile when her beloved nursemaid Morwenna (Lesley Sharp) cleans her up, declaring, “It’s just been a fortnight since I last washed you.” This is not just amusing, but an accurate reminder of the infrequency of regular bathing in the 13th century.

Birdy is confused and then scared when “her time” comes because she knows her father is eager to marry her off so he can gain the dowery money to get out of debt. She hides the bloody rags in the cracks of floorboards. When they are discovered, her father brings on a series of suiters, all of whom Birdy find distasteful, so she resorts to tricks to get rid of them. One she intercepts outside the village and tells him that his prospective bride has a third ear at the back of her head, and thus, not having seen the girl before, he turns back. Indeed, the very idea of marriage she disdains, having seen how her mother has been subjected to so many painful births.

Birdy pours out her thoughts to us and to her brother Edward (Archie Renaux), a monk at a local abbey. During one visit with him she takes down a crucifix attached to a pole, and Edward pleads with her, “Birdy, please do not joust with our crucified savior.” About the only other man she cottons to is her

Eventually, Catherine’s father, wearying of her deceptions, demands that she marry an old, repulsive man she names “Shaggy Beard” in her diary. She spends the year struggling against her fate, dreaming of running away and becoming a monk or sailing off overseas to join the Crusades. How she extricates herself from this particular situation, though still subjected to the patriarchal situation surrounding it, is amusing, and her discovery of her self-worth is gratifying. (Though those who have read the book claim it is far better depicted there.)

One escape for Catherine not explored in the film (it might be in the novel, which I have yet to read) is that of entering a nunnery. Within the confines of a nunnery women were far freer than within a marriage, and some nuns even managed to rise above the bishops which ruled over them—a wonderful example of this was the heroine of the 2009 film Vision – From the Life of Hildegard von Bingen, reviewed here 13 years ago. This Medieval woman by the power of her intellect and talent was able to over ride her bishop and even dared to criticize the pope. This is a minor quibble. This family film offers plenty to talk about, though because of some of its ribaldry and female sexual awakening, it is not for younger children, but rather for those families who have had “the talk.” Though aimed at our daughters and grand-daughters, the film’s rebellious female heroine will appeal to boys as well.

The coming of age story of a lively Medieval girl who comes up with funny tricks to repulse the suiters her father brings so he can pay debts.
Editor Rating ★★★★★4 out of 5
More Details