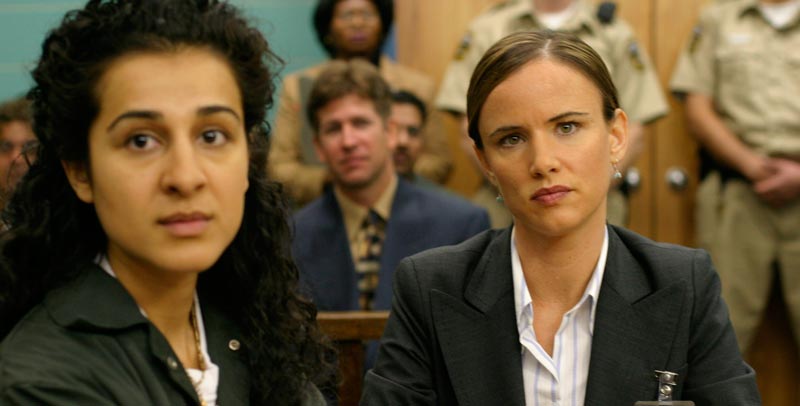 You shall not oppress a resident alien; you know the heart of an alien, for you were aliens in the land of Egypt.


I charged your judges at that time: “Give the members of your community a fair hearing, and judge rightly between one person and another, whether citizen or resident alien.

Though director Don McBrearty’s TV movie was released in 2004, its concern for the plight of the endangered immigrant remains as timely as ever. This is because, despite Emma Lazarus’s poem inscribed at the basis of the Statue of Liberty there remains a stubborn streak in our national psyche hostile to the newcomer, the immigrant, or as they would have been called in Biblical times, “the alien. Scriptwriter Barbara Samuels was inspired by a true story to fashion a heart-rending tale of an Afghanistan immigrant threatened with deportation back to her country where she would have been marked for death.

Meena (Layla Alizada) is the name of the woman. As we see in flashbacks she  has fled Taliban-ruled Afghanistan where her college education had been disrupted. Women had come to her because of that training and implored her to teach their daughters how to read and write. She had agreed, but when the Taliban learned of this, they raided her home, arrested, beat and tortured her. With the help of her brother Amir she had been able to flee the country, but upon arrival in “the land of the free” she had run afoul of the INS.

Enter another woman, ace lawyer Libby (Juliette Lewis) who works almost around the clock at a prestigious NYC law firm to earn a partnership. Her equally ambitious boss demands that she take on a pro bono case, cynically revealing that it will make him look good. Already overworked, she objects, but gives in because he makes it clear that her partnership could be in jeopardy if she refuses.

Close by is an agency designed to aid immigrants, presided over by a compassionate lawyer named Eric (Brian Markinson). During her interview and throughout her orientation session Libby makes it clear that her real interest is back in her own office, Her initial meeting with Meena, who is seeking asylum, is perfunctory. Exchanging but a few words with her lawyer, Meena returns to her bed in the INS detention center where so many other women from varying countries are in similar straits. The chief problem is that Meena has no papers, having destroyed them when fleeing from the Taliban, and her brother back in Afghanistan has disappeared. Libby, a securities lawyer, is totally ignorant of immigration law, and worse, not motivated to learn or pursue the task of tracking down Amir.

The plot follows the familiar path of the self-centered, career-obsessed lawyer, gradually recovering her humanity—if you saw A Civic Action in which a male high-living lawyer is transformed by contact with his pollution-affected clients into a warm-hearted crusader, you know how this film will turn out. But by writing this, I do not want to discourage anyone from watching it, because it demonstrates effectively what so many immigrants fleeing for their lives are up against. And for some who have conflicting feelings about maintaining our troops in Afghanistan, it also  suggests the horrible fate awaiting women in that country should we pull out our small force serving as a deterrent to those who would snuff out the rights of women.

The horror of radical Islam is increased by the events of 9/11 that take place while Meena is fighting for her right to stay in this country. The terrible wrong committed against her is magnified many times over by the loss of lives at the Twin Towers. All this breaks through Libby’s self-absorption, so that she discovers that her legal skills can do far more than merely make her client, and herself, richer. Her inner change of heart is reflected in the physical change of her appearance: at the beginning she wears her hair in a tight bun, so tight that it draws back her facial features into a pinched look. As she become concerned for Meena, she lets her hair fall, giving her a much more natural look.

Ever since the pre-Civil War days of the “Know Nothings” immigrants have been demonized—first the Irish, then later in the century Eastern Europeans, especially “the Jews.” And above all, the Chinese, the latter specifically rejected in the Chinese Exclusion Act of 1882. Today many Americans brand Hispanics seeking asylum in the US as rapists and members of violent gangs. Meena, of course, is from a different area where her life could be endangered, but other than her word how to prove it?

This film provides a good opportunity for viewers to examine how the Scriptures, to which we at least pay lip service as being authoritative, regard the outsider. You might be surprised by a word search of the word “alien” how deep was the concern of the writers of Exodus and Leviticus for the non-Israelite. Throughout the Hebrew Scriptures we find this deep concern that outsiders, “aliens,” be well treated, from the days of Moses in the two books of the Pentateuch” through the prophet Malachi, who depicts God as saying:

Available on DVD, this visual parable film takes its stand with our spiritual forbearers in its concern for a particular group of “the wretched of the earth,” those seeking asylum from persecution. It challenges us to think about the conflict between “keeping our borders safe” and that expressed by Ms. Lazarus, “Give me your tired, your poor, Your huddled masses yearning to breathe free…”

A self-centered lawyer is changed into a compassionate human being when she is made to defend an Afghan woman who will be killed if she is deported back to her own country.
Editor Rating ★★★★★4 out of 5
More Details