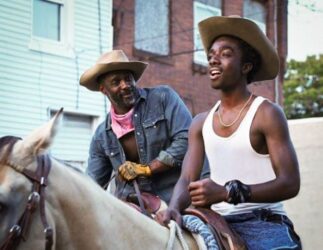 Director (and co-writer with Dan Walser) Ricky Staub’s film, based on the 2011 novel Ghetto Cowboy by Greg Neri, offers an unusual twist on the old father-son theme. Probably none of us outside Philadelphia know anything about the clusters of Black horse lovers who have been fighting a losing battle to save the old stables left over from the city’s horse and buggy days.

The story begins in Detroit where teenager Cole (Caleb McLaughlin) has spun out of control of the school authorities and of his mother Amahle (Liz Priestley). Fed up with his rebellious antics, she thrusts his clothes into two large plastic bags and hauls them and him off to Philadelphia to live with his estranged father Harp (Idris Elba). Harp still lives in the same neighborhood when the family had been together, but the father is not at home. The frustrated mother leaves Cole and his two bags on the doorsteps and drives away. Nessie (Lorraine Toussaint), a neighbor sitting on her nearby doorstep recognizes and greets him. She will turn out to be peripheral to Cole’s story, yet also offering such adversity-taught wisdom as “Hard things come before good things.”

Harp returns to find his son sullen and rebellious in regard to his father, whom he can barely remember. The father does not welcome him with warmth, and far more surprising to the son, is the discovery that if he stays he will be sharing the apartment with a horse. Yes, a smelly beast, but a beloved companion of a man dedicated to rescuing unwanted horses. The boy leaves, but after several encounters he returns, agreeing to live by his father’s rules so he will have a roof over his head. Cole has met his childhood friend Smush (Jharrel Jerome), a low level drug pusher with dangerous ambitions to rise to a higher level. He had once been a rider, but left the stables, seduced by the big money of the drug racket. The two youth rebond, though when Harp discovers this he lays down the ultimatum, “You riding with Smush, you’re not welcome here.” But Smush offers him gifts, such as an expensive pair of white sports shoes,  and so Cole keeps their association a secret from Harper. During the day the boy is made to work at The Fletcher Street Stables where his father hangs out with the old and the young hangers on who spend the days talking about he good old days.

Another former member of the Stables is Leroy (Cliff “Method Man” Smith), now a Philly cop. He pops in and out like a prophet of doom warning Harp and friends of the developers making plans to move in and gentrify the neighborhood, as they have in so many other areas of the city. There is an expiration date on the place, even though the Riders try to ignore or deny it.

Named after a real set of stables in Philadelphia, the Fletcher Street Stables are among the last survivors of a string of stables going back a hundred years. Before cars and trucks took over the streets of Philadelphia horses were the means of transportation, with a large cadre of Blacks serving as drivers and riders. Through the years hundreds of these horse lovers carried on, often rescuing horses from slaughter and nursing them back to health.

Nessie, apparently the owner gives Cole the job of mucking out stables. Eying his white pristine shoes, she says to herself,  “This is gonna be good.”  The boy shovels manure into a truck under the watchful eye of Paris (Jamil “Mil” Prattis), a wheelchair-bound horse lover who becomes like a big brother to the teenager. He chafes at the job of disposing of the smelly manure but perseveres. This part is amusing in that the boy loads the truck a shovel-full at a time, even though an empty wheelbarrow is close by. The work goes a little better when he takes the hint to use the wheeled tool. Well before bonding with his father Paris becomes the caring big brother he had needed. The young man’s refusal to give up on life also is inspiring to Cole, and later he sees what a caring community the Riders are when they present his mentor with a specially made saddle so that he can ride again.

The youth has an initially scary encounter with a large horse named Boo, a beast too wild for anyone thus far to tame. Through his association with such riders as Mercedes, Prattis, Albert C. Lynch Jr. and Michael “Miz” Upshur.  Cole comes to see the importance of community. There is even a hint of a budding romance between him and the attractive rider about his own age, Esha (Ivannah Mercedes).

Meanwhile there is his clandestine running with Smush. He has been skimming some of the money he turns over to his superior, dangerous enough, but is determined to work a deal to replace that person. He harbors a dream of earning enough to retire from the deadly trade and buy a ranch in the country far from the deadly streets of the city. Will Cole stay with his friend, or accept the new way of life offered by his father and associates? The choice reminds me of the one that faced Tres, the teenage protagonist of John Hugh’s great ghetto-set film Boyz N the Hood.

The plot may be as familiar as that of other African American ghetto films, but the setting of urban stables provides a fresh take. One of the Fletcher Street Riders even points out how Black cowboys were excised from history and thus the cowboy genre—except for one remnant. The Black drovers were called “cowboys,” a carryover from the Southern label for a Black man. What happens to Smush and to the horses (when the latter are seized by Animal Control) provides the background for the father and son to enter into a deeper and warmer relationship with each other. The Fletcher Street Riders lose their stables, but their sense of community remains strong. And so does the new bond between father and son, Cole returning to Detroit a far better person than when he had arrived in Philadelphia at the beginning of the summer.

The film also might cause us to pause and reflect upon what among most white people is considered a positive development, gentrification. This development in which the more affluent, usually white, buy up run-down houses and transform a neighborhood from a slum into a more prosperous (white) community, looks very different from the perspective of those being displaced. The Fletcher Street riders are fighting against this, but with the force of government behind them, the encroachers have moved into other neighborhoods and closed down the stables.

Ricky Staub and co-writer Dan Walser pay moving tribute to a determined group of Black men and women trying to hold onto their past. It is a film that introduces us to and immerses us in a situation in which those often excluded by society are struggling to maintain their dignity and protect their beloved horses from extinction. Cole, journeying from self-absorption to feeling and caring for others, becomes one more success story in the hundred year history of The Fletcher Street Stables. It is gratifying that at the end of the film several of the Fletcher Street Riders who had played themselves– Mercedes, Prattis, Albert C. Lynch Jr. and Michael “Miz” Upshur– testify to how their lives also were impacted by the horses they rescued and cared for. In many ways through its loving support we see that the Fletcher Street Stables has served as a surrogate church.

Cole, sent to his estranged father in Philadelphia for discipline, is changed when his father brings into the life of the Fletcher Street Stables.
Editor Rating ★★★★★4.5 out of 5
More Details