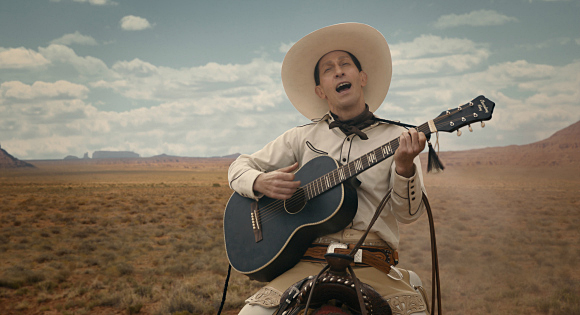 I am playing catch-up with this film and with The Queen’s Gambit this month.


And he called them to him, and spoke to them in parables…

After writing about so many heavy films dealing with racism and such, I wanted a change, and the Coen brothers certainly provided this in the six-segment film set in the Old West. None of the six stories are connected, other than by the time and their transpiring west of the Mississippi. They range from the whimsical to the somber, with all infused with the wittiness expected from a Coen film. The script is by them, with two of the stories based on or “inspired by” other authors—“All God Canyon” by a Jack London story, and “The Gal Who Got Rattled” by Stewart Edward White.

The segments are framed by a time-honored Hollywood device: an old book with the title embossed on the cloth cover is opened to the title page of the story and then an illustration with a caption. With each story beginning thusly, we get the feeling that we are sitting with an old fashioned story book filled with stalwart characters and thrilling deeds.

I see that some critics have regarded this film as “minor Coen Brothers,” and maybe it is, compared to some of their other numerous works. But even a “minor” Coen Brothers film is preferable to so many of the mediocre films by less talented directors. The stories are not connected by any of the characters, but they are by the theme of death and folly. It is as if the jaded writer of Ecclesiastes had been equipped with a film camera, rather than by quill and papyrus. The teller(s), the two brothers, also have seen it all, and the

Old West enshrined in so many mythological films of gunslingers, prospectors, wagoneers setting out to begin anew and blood-thirsty “savages” out to stop them—all of their journeys will end in the grave. Not a very comforting picture, but one we need to consider, we who live in a death-denying culture that thinks science and technology are our salvation.

Six stories set in the Old West of people reminding one of The Ship of Fools with death ever close at hand.
Editor Rating ★★★★★4.5 out of 5
More Details