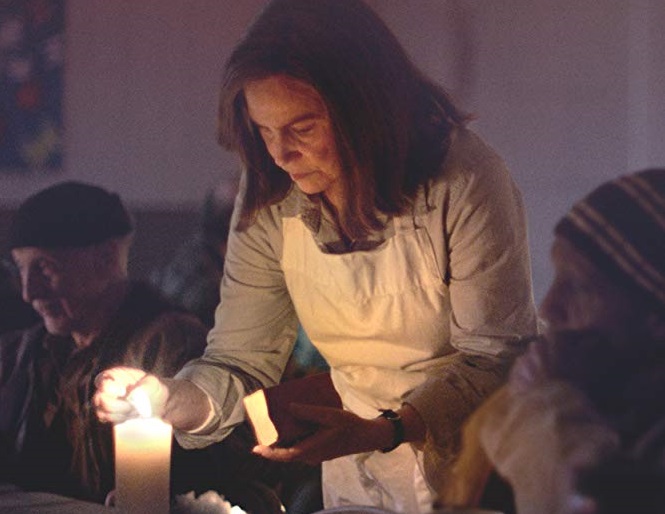 Written and directed by first time director Kent Jones, this is a little jewel of a film that focuses upon the life of a care giving older woman. If younger viewers will give the film a chance, they will be graced by this tale of a widow whose friends are dying off one by one as she struggles with the burden of a son addicted to drugs. The title character is  played by the 70-year-old Mary Kay Place, a church-going lady in rural rural Massachusetts. Her friends and relatives go back decades, so they can engage in straight talk that is frank and heartfelt. She is in and out of homes bringing groceries and casseroles to neighbors. In fact, she keeps a list of to-dos so she can keep straight all the people she has to help.

When we first see her, she is waking up from a nap beside the bed of her cousin Donna (Deirdre O’Connell), who’s in the hospital struggling with cervical cancer. The two find escape in their gin rummy games. Diane volunteers at a soup kitchen, frequently eats lunch at a dingy café with her friend Bobbie (Andrea Martin). These make up the positive part of her life. Then there’s her frequent encounters with son Brian (Jake Lacy), a 30-something year old whose drug addiction has ruined his life. He has no job, nor does he work at keeping up his grubby apartment, as she observes when delivering his clean laundry to him. She has been told that only Brian can really help himself, but she cannot stop from trying. There is a hint that there is something in their past of which she is not proud. Is her eagerness to help so many others an attempt to atone for something in her past?

There is a touching scene in an old haunt that she revisits. She drinks too much because she is so worried over not being  able to find her son. She selects from the juke box an old song “I’m Too Sexy” and dances to it. She wants another drink, but the waitress realizes she has had more than enough suggests that she leave the place. The bar tender tells her , “I remember you, Diane,” raising in our minds the thought that she might have had a darker past than her present life of good deeds would imply.

Religion enters the picture, with one scene of Diane attending a Pentecostal church, where she seems to be just an observer rather than a participant in the spiritual frenzy. Later her son reappears. He and his girlfriend have been at a rehab where they found born again religion. Diane is delighted to be invited over for a dinner, but her good feelings are dissipated when Brian testifies and says that he wants her to make the same discovery of God that he has experienced. She replies that she is happy in her own church, but her son persists, saying that he is witnessing. She angrily accuses Brian of being selfish. The girl friend joins in, and Diane rises from the table and leaves.

How this works out toward a tender, if not complete, reconciliation adds up to rewarding viewing. We discover at last what “sin” has cost her so much resentment from her son, and acknowledging it, opens up the possibility of healing hr soul. This slice of life film is so much more real than most of the escapist thrillers and comedies competing for our box office money.

Kent Jones, a film critic and director of the New York Film Festival, is spiritually astute, crafting a film that requires patience so that it can reach us deep inside. He created the role of Diane for Mary Kay Place after seeing her in a small part in a play. He deserves our gratitude for propelling her into a lead role, revealing what a fine actor she is. And he has surrounded her with an ensemble cast of supporting actors that you will vaguely recognize as they bring to life the kind of caring community that makes a town livable. Some of them reminded me of the dear church ladies in Lars and the Real Girl who brought food to Lars during a period of anxiety and grief and sat with him in his living room, not talking as they knitted and wordlessly supported him.

This little film has come and left Cincinnati’s Esquire Theater, playing for just a week, with no fanfare. You will have to search for it, but the effort is worth it.

Care giver Diane struggles with her drug-addicted son and the death of a loved one while volunteering at a soup kitchen.
Editor Rating ★★★★★4 out of 5
More Details