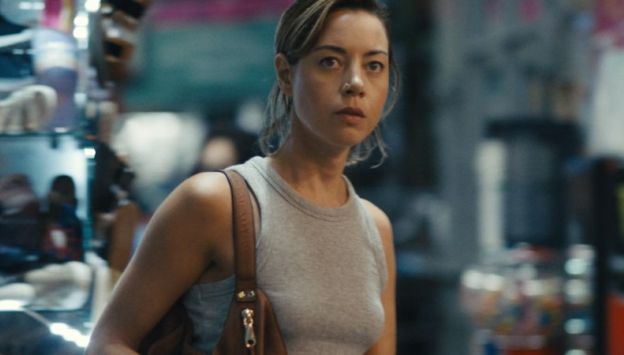 Better to be poor and walk in integrity than to be crooked in one’s ways even though rich.

Writer/director John Patton Ford’s debut film combines the crime thriller genre with a scathing social commentary on the exploitive nature of our corporate dominated society. He presents us with a protagonist whom we come to root for despite the immoral choices she makes. We are able to do so because she is as much victim as predator.

Emily (Aubrey Plaza) is $70,000 in college debt even though she was unable to finish her degree because of a DUI and an arrest for assault against an abusive boy friend. We learn of her debt when we hear her end of a phone call enquiring about her inadequate payments, and though we do not hear the answer to her question about the amount of interest added each month, it is evident that it so substantial that she will never be free from it. (At one point when speaking about obtaining money she says that she just wants to “be free.”)

Emily has a dead-end job working for a caterer to office workers. A couple of times as she delivers and sets out the foil-covered containers of food, the hungry office staff stands around, never interacting with her because she is regarded as no more of a person than the food container. At the kitchen her boss reminds her that she is just a contract worker, and thus entitled to no benefits or other considerations. To add to the poignancy of her position, she does have one friend, Lucy (Megalyn Echikunwoke), a college classmate now working in the art department of a high end ad agency. During their meetings at a watering hole she dangles before Emily the possibility of putting in a good word for her, but keeps putting her off as to when.

We know that Emily is a strong person by the opening scene in which during a job interview the man brings up her criminal past which she had not mentioned, even though he had told her he had not run a background check on her. This obvious lie enrages her so that she gets up angrily, telling him in no uncertain terms what she thinks. This repressed rage will burst forth later when Lucy finally does obtain an interview for her at the ad agency.

In the meantime Emily accepts a tip from co-worker Javier (Bernardo Badillo) about a job where she could make a lot for a single outing. She shows up at a large garage or warehouse at which the Lebanese Youcef (Theo Rossi) tells the seated group that they can make $200 for an illegal but safe job. He offers everyone the opportunity to opt out if they do not feel comfortable, and Emily at first starts to leave. Youcef calls out to her, she reconsiders and returns to her seat. The job is to use a fake credit card and ID to buy a giant screen TV set at a big box store and then beat it out of there before it is discovered that the cards are phony. A third party then takes the set from her for resale on the black market.

Emily does so, and Youcef is impressed enough with her to offer a bigger job the next day. She is to pick up an expensive  car, but must get away within 8 minutes, the minimum time required to check the authenticity of the ID and credit card. This scene proves to be highly suspenseful, ending in minor violence and a very narrow escape. Youcef becomes so drawn to Emily that he equips her so that she can create credit cards for further jobs. They also become romantically involved. However, lurking in the background is Youcef’s cousin and senior partner Khalil (Jonathan Avigdori). He will be far more difficult to withstand than the two thugs who steal Emily’s money at one point and whom she pursues with taser and box cutter.

Emily does get her opportunity to apply for a position at her friend Lucy’s ad agency, but after a lot of back and forth talk with the patronizing exec named Alice (Gina Gershon), Emily is surprised that the position is an internship that will not pay anything for several months. She, of course, can afford to do so, and when she points out that Alice came from a time when students were not saddled with such debt, tells off the self-satisfied woman as she stalks out.

The film, like those old time crime films starring James Cagney or Humphrey Bogart, gives us reason to root for the protagonist who makes immoral choices in order to survive in an uncaring world. However, the ending would not have passed the censors of the olden times, nor is it satisfying to me. But it does offer us a woman who is strong enough to fight back against the unfairness of a world with rules stacked against her. She decides to make up her own rules, but will she ever find any stability in such a world? She would never agree with the author of Proverbs because she apparently is totally secularized, the Bible for her as outdated as a rotary dial telephone. But Emily is determined not to be a passive victim. She is a survivor, and her determination equips her to live without a man. But what kind of a life will she carve out in a land far from home?