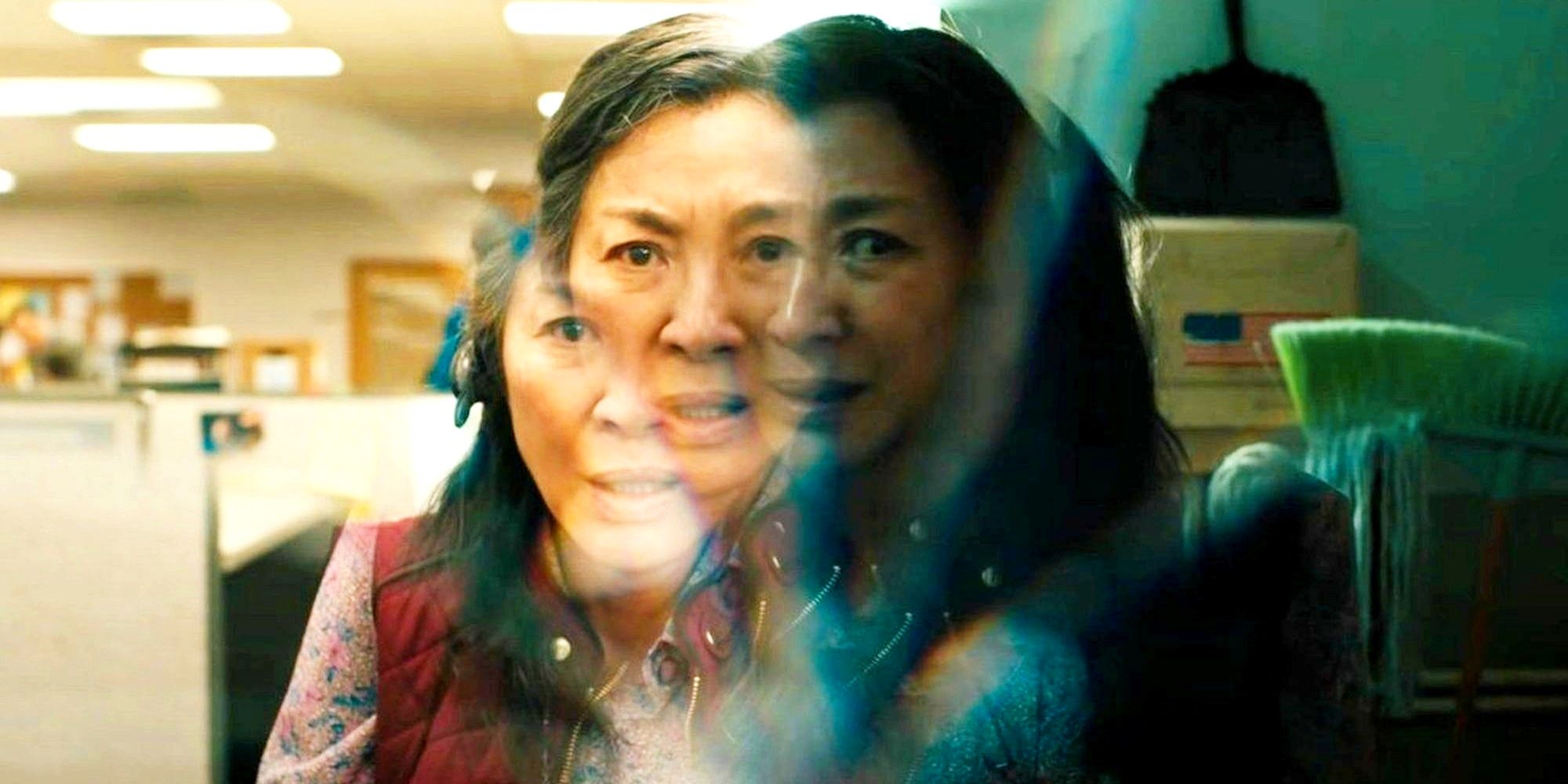 He has told you, O mortal, what is good,
and what does the Lord require of you
but to do justice and to love kindness
and to walk humbly with your God?

This is the second film I’ve reviewed that was directed and written by Daniel Kwan and Daniel Scheinert, a dynamic duo known collectively as “The Daniels.” Just as their Swiss Army Knife was a creative and bizarre tale, so is their new one about a Chinese-American family beset by the IRS and the corrosive effects of the wife’s being disowned by her father back in Hong Kong because she married against his wishes—and who then we follow as they jump back and forth into alternate universes. The Daniels’ film combines the sci-fi multi-universe theme, popularized by Marvel films and the Matrix franchise, as well as embracing the genres of Kung Fu, Mother-Daughter, Husband-Wife estrangement—and of course, the theme of saving the multiverse when it is threatened by other versions of their own daughter.

However, this time it is not a superhero to the rescue, but a mom who is failing at everything. Husband Waymond at one point says to her, “Most people only have a few significant alternate life paths so close to them. But you, here, you’re capable of anything, because you’re so bad at everything.”

You may be as confused at first by the fast-paced film as I was, but if you buckle down and go along for the roller coaster ride, you will be happy that you did. It was only after a second viewing that some matters were cleared up, though other parts of the film still remain baffling—this is as well made a movie as it is puzzling, so I am looking forward to seeing it at again when it comes to streaming video.

Divided into three unequal parts, the film begins with Evelyn Quan Wang (Michelle Yeoh) sitting in her apartment while sorting through bills and receipts in preparation for an audit at the IRS center. Her table is a mess of stacked papers, and the laundromat which they live above also is a chaos of customers and machines that demand her constant attention. Husband, Waymond (Ke Huy Quan), keeps trying to get her to talk with him for a moment, but she brushes him off. We can’t help but notice that the papers he is holding constitute a divorce form. Also their lesbian daughter Joy (Stephanie Hsu) is trying to get Evelyn to meet and accept her lover Becky Sregor (Tallie Medel), and her father Gong Gong (James Hong), recently arrived from Hong Kong,  is still in his pjs and demanding his breakfast. Evelyn does manage to attend to a customer whose laundry packet has been misplaced, but she has no time for family concerns at the moment.

In the elevator at the IRS Waymond abruptly changes from his meek self to a man of determination, covering the security camera with his umbrella as he tells Evelyn that she must go to the broom closet. The bewildered wife is only half attentive to the aggressive IRS clerk Deirdre Beaubeirdre (an almost unrecognizable Jamie Lee Curtis!), who, looking critically through the mountains of papers, suspects the pair are frauds.

Suddenly Evelyn is thrust into the broom closet where her incredible adventure begins, taking her to a number of multi-universes wherein her life has taken a different track. Such as one when she heeded her father’s orders, eventually becoming a famous Chinese opera singer. (In the first one she simply liked to sing.) In others she is a teppanyaki chef, a Kung Fu expert, and in one hilarious sequence a rock, along with her daughter, out in the desert. Her Kung Fu self is delightful in that Ms. Yeoh is once more fighting against multi-opponents as she did in Crouching Tiger, Hidden Dragon—the martial choreography is incredible. (We see also that the Waymond in the elevator learned advanced martial arts skills in an alternative world.)

Evelyn has to learn on the run how to switch from one universe to another—“jump versing” it is called. Just as she is faced with disaster in one, she jumps to another, only to find herself again facing annihilation from Deirdre and her minions, or a cruel alpha Gong Gong who operates from a wheel chair. There is also an “alpha universe” where the characters try to impact events as they follow Evelyn’s jumps.

Lots of funny incidents, as in the universe where Evelyn is a chef, the incident paying homage to Ratatouille; her co-chef Chad guided by a racoon atop his head underneath his chef’s toque -blanche. Chad is so stressed out when the critter is snatched away that he cries out, “Raccacoonie, I don’t know what I’d do without you.” He continues, “Raccacoonie taught me so much! I… I didn’t even know… how to boil an egg! He taught me how to spin it on a spatula! I’m useless alone.” Evelyn replies, “We’re all useless alone. It’s a good thing you’re not alone.” She climbs atop his shoulders and, clinging to his hair, saying, “Let’s go rescue your silly raccoon.”

In many jumps Evelyn is fighting against her daughter Joy whose alternate ego is named Jobu Tupaki, dressed in an assorted number of garish costumes. The Evelyn of the alpha universe is responsible for Joy becoming Jobu Tupaki because she pushed her too hard in practice jumping, the result being that Joy’s mind became splintered and she is now overloaded by experiencing all of the universes at once. (Think of Bruce Almighty when an exasperated God hands presiding over the Buffalo area to him and the human is overwhelmed by the myriad of prayers he now hears.)

In one absurd scene Joy/Jobu is so upset with everything, that she has poured all of her negativity into an oversized bagel, so that it becomes like a black hole. (I would have expected the bagel to be a fortune cookie, but of course this would be stereotyping!) She tells her mother that she built the bagel so that she might destroy herself. In one universe Gong Gong urges Evelyn to kill Jobu Tupaki while she is distracted, but she cannot do it, even if it would, as her father argues, eliminate one of the universes for the girl to jump to.

Between martial arts fighting and such zany moments as chasing after the stolen raccoon, there are many tender scenes, such as the following which the various forms of Waymond, switching between multiverses (terrific editing here), says:

(to alternate Evelyn, an opera singer) You think I’m weak don’t you? All of those years ago when we first fell in love… your father would say I was too sweet for my own good. Maybe he was right.

Waymond:  (to verse-jumpers) Please! Please! Can we… can we just stop fighting?

Waymond: (To Evelyn) You tell me it’s a cruel world… and we’re all running around in circles. I know that. I’ve been on this earth just as many days as you.

Waymond: (to verse-jumpers) I know you are all fighting because you are scared and confused. I’m confused too. All day… I don’t know what the heck is going on. But somehow… this feels like it’s all my fault.

Waymond: (To Evelyn) When I choose to see the good side of things, I’m not being naive. It is strategic and necessary. It’s how I’ve learned to survive through everything.

Waymond: I don’t know. The only thing I do know… is that we have to be kind. Please. Be kind… especially when we don’t know what’s going on. (I think this time they are back at their laundromat.)

Waymond: I know you see yourself as a fighter. Well, I see myself as one too. This is how I fight.

Perhaps the most tender exchange is between mother and daughter when, outside the trashed laundromat, Joy declares that she is leaving the family. The two banter back and forth, during which Evelyn declares,

“Of all the places I could be, I just want to be here with you.”

Joy starts to cry as she replies, “So what? You’re just gonna ignore everything else? You could be anything, anywhere. Why not go somewhere where your daughter is more than just this? Here, all we get are a few specks of time where any of this actually makes any sense.”

And her mother says, “Then I will cherish these few specks of time.”

The film’s resolution reminds me of Isaiah’s poetic picture of harmony among animal predators and their prey—I started to type out the names of all who are present, but I will let you discover this for yourself and see if my comparison is accurate. And people of faith might, when Waymond says she will triumph because she is so bad at everything, reflect upon Jesus’ victory over sin and death through the weakness of the cross. As savior figures go, Michelle Yeoh’s Evelyn is an original. Her words, a plea actually, to her daughter that she “will cherish these few specks of time” spent with her are as poignant as the similar thought in Dead Poets’ Society expressed flamboyantly by Robin Williams to his students, “Carpe Diem! Seize the day boys!” Also, food for thought is the theme of companionship in which Waymond is so important to Evelyn’s development.

I buy very few films these days, but this is one I definitely want to own so I can go over particular scenes again. The caste is uniformly excellent, with Michelle Yeoh even better than her usual self. I will be disappointed if she is not among the Oscar contenders for this year. The same goes for the directors/writers, the Daniels, as well as editor Paul Rogers (what a complex job he had!) and director of photography Larkin Seiple.

This will be on this year’s VP’s Top Ten Film List for sure!

In this dramedy a Chinese American woman, seen as a failure, jumps between multiple universes to save the multiverse from destruction, her opponents often members of her own family & an IRA agent.
Editor Rating ★★★★★5 out of 5
More Details