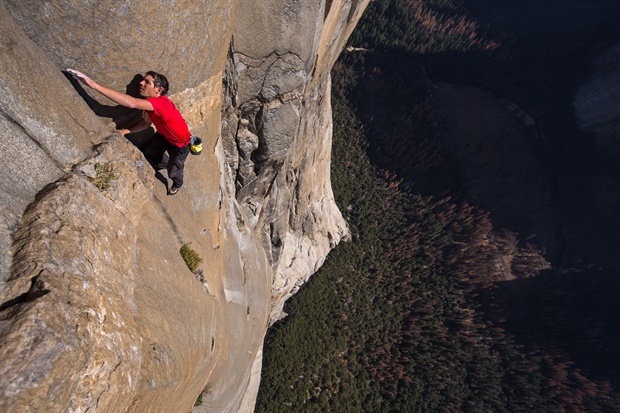 Though the writer of Ecclesiastes urges us to put “Safety first,’ not everyone takes heed, especially free solo mountain climbers. (There probably weren’t any of these around when Qohleth wrote, else he might have added their avocation to the two he did mention.)

Directors Jimmy Chin and Elizabeth Chai Vasarhelyi take us inside the world of climbing in their Oscar-nominated film. 31-year-old Alex Honnold’s great achievement of scaling 3000-foot-high El Capitan without ropes came as a result of several grueling years of preparation, and thus was no over-night accomplishment. The film crew was with him for over two years, capturing on film his precarious moments on the mountainside, as well as some more private moments with his girlfriend Sanna McCandless.

I stayed away from the film for a long time because I question such endeavors that jeopardize a person’s own life and bring worry and anxiety to his loved ones and friends. There could also be times, were he to become stuck in a crevasse or trapped by a sudden, storm when he might place would-be rescuers in danger as well. As we hear Honnold conversing, I became a little more sympathetic, given his passion for climbing and feeling of exultation that a successful climb brings. At one moment he declares that climbing comes before everything, even before any relationship he has. This made me marvel at Sanna’s devotion to him—though later we see they do have their issues ever so often.

We know the outcome of Honnold’s efforts, and yet the film manages to keep us in suspense as the climber inches cautiously upward, his soft-toed shoes finding indentations so tiny that we can’t see them, and at times almost leaping to the next spot that seems incapable of holding a squirrel, let alone a grown man.

The filmmakers know that we would wonder how they were able to obtain close-ups of his feet and hands when he was a thousand and more up, so they show how the camera crew also were expert climbers. One stayed on the ground to tend the master camera equipped with an incredibly long lens that could close on Honnold, while other climbers with their cameras were up on the cliff. Down on the ground one of them reflects on their complicity should Honnold fall to his death, musing were they pushing him to take such risks?

To remind us that Honnold’s is a death-defying feat, vignettes of three other free solo climbers are inserted, told in newspaper headlines, photos, and even some video clips. All of them fell to their deaths. Sanna and the film crew are well aware of these men and show their anxiety.

Some viewers will admire, others criticize, Alex Honnold for putting himself in such peril without the insurance of ropes and climbing paraphernalia. All will understand him and his kind a little better after seeing this engrossing film.