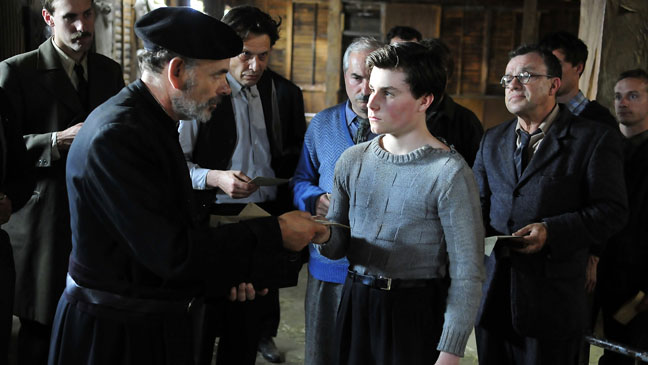 Before reviewing the film let me tell you about its distributor, Corinth Films, a distributor of indie and European films. This is the first of the four films that I have from their catalogue, and once these are reviewed, will look forward to exploring more. One of the four is an early Federico Fellini film I Vitelloni, which I hope to review in the next issue. Their collection ought to gladden the heart of any film lover who cherishes independent films. You can see for yourself by going to http://corinthfilms.com/.

You have plowed wickedness,
you have reaped injustice,
you have eaten the fruit of lies.
Because you have trusted in your power
and in the multitude of your warriors,
therefore the tumult of war shall rise against your people,
and all your fortresses shall be destroyed…

NOTE TO READERS—If you like this movie—and have Amazon’s Prime service—the movie is streaming free of charge  in early 2019. Amazon’s movie list is constantly changing, so enjoy the movie soon while it’s easily available. Here’s my review …

This is a tragic true tale set during the Vichy Regime and the German occupation of France in 1941 when Communist resisters decided to assassinate a pair of German officers. Made for TV by German director Volker Schlöndorff, it is based on a memorandum called “On The Hostage Question” written by a German army officer and poet named Ernst Jünger and other writings.

The IMDB one-line description (“A teenager joins the resistance in Nazi-occupied France during World War II”) led me to believe that this was a martyr film similar to Sophie Scholl: the Last Days, but it turns out that it is much more complex that excellent film, with the teenager in question, seventeen year-old Guy Môquet (Léo-Paul Salmain), only one of several major characters. Far from being a biographical film, it is a study of the Nazi reign as a vast machine that grinds relentlessly on, destroying its victims remorsefully. All of the characters in the film are part of or caught up in the most efficient killing machine history.

First, there are the Communist resisters who botch the assassination, killing but one of the two Nazis. Then there is German army officer Ernst Jünger (Ulrich Matthes), appalled at the orders from Berlin to kill 150 hostages in retaliation for the killing. (The Communists had cynically expected such a reaction, the result being, as they hoped a hardening of the attitude of the populace against the Germans.) Jünger protests, pointing out how this would increase the hostility of the people against them, but all he can do is to get the number reduced to 100. His Vichy colleague, a Frenchman (Sebastien Accart), caught in the middle, must deliver the verdict to the local prison where a large number of political hostages are being kept. There we meet young Môquet, who has given his heart to a lass, who is held in the women’s section. As sad as his fate is that of his friend, the newlywed Claude Lalet (Martin Loizillon) scheduled for release the next day but still on the hostage list due to a clerical error. The Nazis will accept no substitutes, so Lalet will not live to consummate his marriage.

The local Anti-Vichy priest L’abbé Moyon (Jean-Pierre Darroussin) is sent in to try to bring comfort to the condemned. This cleric is so compassionate and respectful of the condemned that he does not impose his faith on the prisoners because he knows that they are atheists. Instead, he distributes paper and pens to those who want to write a last letter to loved ones, and he promises to send them. It is young Guy Môquet’s that is still read by French students on the anniversary of his death. During the grim execution scene we hear voice overs of other prisoners reading from their epistles. One other nameless character should be mentioned, the young German rifleman (Jacob Matschenz), whose conscience at executing such young prisoners causes him to throw up and drop out of the firing squad. No doubt he will either wind up in a stockade or shipped off to be cannon fodder on the Eastern Front.

This German-French production apparently wants to both condemn the injustice of the war crime and to show that not all Germans and Vichy officials were willing participants. But they went along, the Nazi system being such an implacable and all-powerful machine in which they were cogs. For some viewers the film will be rather slow moving, once the excitement of the attack on the two Nazi officers is over. For those interested in the Nazi era, this is one more good addition to the category. Ernst Jünger, already a famous novelist and poet before the Nazi era, emerged from the war, was cleared of any Nazi involvement, and became as popular a writer in France as he was in Germany. The fate of Nazi Germany, which “plowed wickedness,” certainly bears out the denunciation that the ancient prophet leveled against Israel.

Set in Vichy France, the film follows the fate of a group of hostages whom the Nazis ordered killed when one of their officers is shot.
Editor Rating ★★★★★4 out of 5
More Details