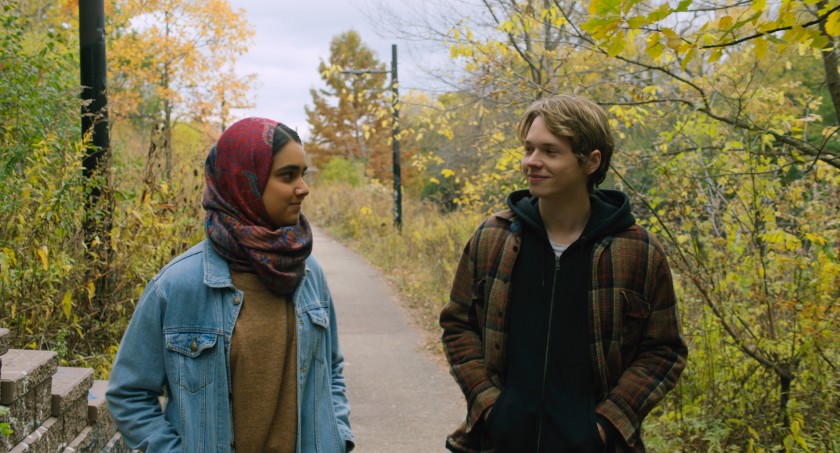 Children, obey your parents in the Lord, for this is right. “Honor your father and mother”—this is the first commandment with a promise:  “so that it may be well with you and you may live long on the earth.” And, fathers, do not provoke your children to anger, but bring them up in the discipline and instruction of the Lord.

Writer/director Minhal Baig brings us a very unusual version of the teenager coming of age story. Who has ever filmed this from the perspective of a 17-year-old Muslim girl, daughter of strict Pakistani parents who are only half acclimated to their new country? Although the pace of the film might try the patience of some viewers, it offers a rewarding time for those concerned about a young woman on the cusp of discovering her freedom.

That Hala (Geraldine Viswanathan) is a devout daughter of Islam we see in two moments of prayer, one at the beginning of the film as she prepares to go to school, and the other almost at the end when she is far from home. In between we see her life upended by her attraction to a fellow student who loves literature as much as she does. He becomes the catalyst for the revolution that takes place in her relationship with what she thinks is her overly strict mother Eram (Purbi Joshi)  and her supportive, even doting, father Zahid (Azad Khan). He, an avid worker of crossword puzzles, is always proud when she helps him come up with a long English word that fits in. Back in Pakistan the marriage had been an arranged affair, so Eram had not gone to school. She speaks only Urdu with her daughter.

Ms. Baig eschews cheap cultural clash humor by showing Hala as a skateboarding teen with a close friend in Melanie (Taylor Marie Blim) and a crush on Jesse Ross (Jack Kilmer), both non-Muslims. As she walks through the halls of her suburban Chicago school no one stares at or remarks on the headscarf she wears. When she reads in her creative writing class from her journal, her teacher Mr. Lawrence (Gabriel Luna) compliments her, encouraging her to become a writer. In the literature  class he leads a discussion of Henrik Ibsen’s famous play about female empowerment, A Doll’s House. We will soon see that Hala’s life has some parallels to the play’s heroine Nora.

Like most teens,  Hala is exploring her  sexuality. We see her touching herself while in the bathtub. She dares not show her interest in the blond Jessie in class, but at the local skateboard park where he also practices, she lingers until the two strike up a conversation. Their relationship blossoms as during their after-school encounters they quote poetry, Jesse  apparently a fan of Langston Hughes. The two meet many times, growing ever closer, until they are able to be alone in a bed, but…

When she returns home after dark her mother’s suspicions are aroused. Up to this point Zahid had taken her side, but now he cannot overlook her behavior. He realizes the girl is lying to him about what she has been up to. In his rage he strikes her, so that the next day after class Mr. Lawrence notices her black eye and asks about her home life.

Convinced they must take charge of their daughter’s life, as they would have done in Pakistan, Zahid invites a Pakistani-American family and their young adult son to dinner. Hala is already upset with her father, not only due to his hitting her, but also because of something she has witnessed while eating at a restaurant with Jesse—her father dining with a woman who is not her mother. She sits throughout the dinner conversation in silence as the two sets of parents try to make conversation. When called on, she answers in short phrases. Realizing that the dinner is intended to be a match-making affair, resulting in an arranged marriage like that of her parents, Hala angrily leaves the table and runs out into the darkness. She will do something that she will regret, because its consequences will harm someone whom she admires. No, not one, but two people will be brought to grief.

The crisis that Hala precipitates the night of the dinner lands her in trouble with the school principal, and when her father sends his assistant to the school to deal with the situation rather than come himself, Hala realizes who is really concerned for her. Mom is there, and just as angry that Zahid is “too busy” at work to come to the aid of his daughter as Hala is disappointed.

Hala’s respect for her father, already strained by the infidelity she had witnessed, is unexpectedly transferred to her mother. In a heart to heart conversation, Eram reveals what she gave up—an education—by submitting to an arranged marriage and how she felt Hala has looked down on her because of her poor education. For the first time really understanding the plight of her mother, Hala tries to reassure she had never judged her for her lack of schooling. Eram makes a life-changing decision, and as Hala goes off to  distant college, we are left with a sense of hope for the future of the mother, as well as for the daughter.

This movie has been strongly attacked on IMDB by a few viewers as being Islamophobic. Some Muslims apparently are as sensitive as Fundamentalist Christians are to any criticism in a film of their religion. I suspect that what some of us viewers saw as a declaration of breaking away from bondage—Hala’s removing her headscarf in one scene, and letting down her hair toward the end—these Muslim criticizers regard as a repudiation of Islam in its entirety, rather than a rejection of just a culturally-related custom. They ignore the pointed fact that one of the first things Hala does in her distant dorm room is to offer up a prayer. They were also critical that Geraldine Viswanathan, a non-Muslim, plays Hala, as if only a Muslim should be allowed to play one. Some viewers even say the film should be banned.

It looks like this is a film that hits close to home. Though it is a pity that some have rejected the film on baseless grounds, I think most will be able to see that writer/director Minhal Baig is merely celebrating the emerging of a daughter and her mother from paternalistic rule. This filmmaker is no more Islamophobic than Haifaa Al-Mansour was when in her Wadjda she told the story of a Saudi Arabian girl who fought for her right to own and ride a bicycle.