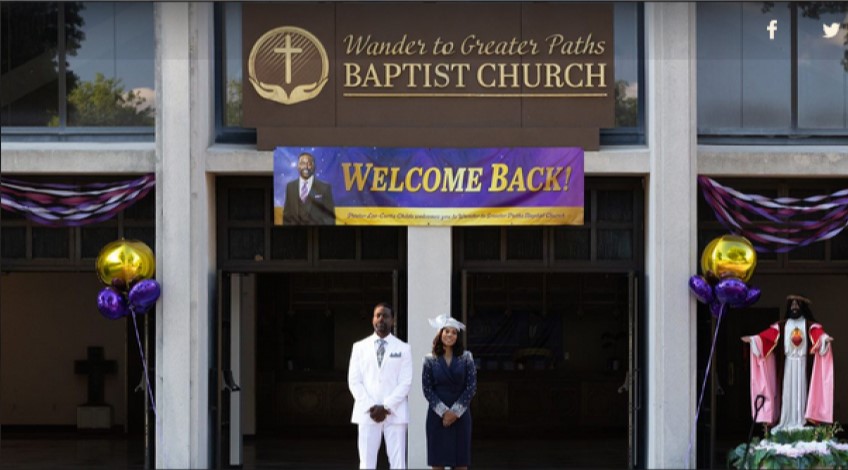 Director/writer Adamma Ebo takes aim at a very large target in his satirical film—the ostentatiously wealthy preacher of the prosperity gospel—so he finds plenty to ridicule in his film. We might think of the Rev. Lee-Curtis Child as a combination of the fiery prophet Ezekiel and Richard Pryor. The “Nones” in the audience will laugh uproariously at the antics of the clergy couple, and even believers can join in the criticism of the clergyman’s perversion of the teachings of Christ and the Hebrew scriptures.

Lee-Curtis (Sterling K.Brown) and Trinitie (Regina Hall) Childs are in crisis mode, planning to recover from the husband’s sexual scandal that drove away most of the members of his 25K members of the Atlanta-based megachurch Wander To Greater Paths. Trinitie has stood by him despite his transgressions, hoping to become once again “First Lady” at his “resurrected “ church. Not facing prosecution for his misbehavior, the good pastor has hired a documentary filmmaker as part of his campaign to make a come-back at his empty church building. In one funny scene the crew is filming the pair outside the church building when he steps in something gooey, curses when it sticks to his show, and calls out, “You can edit around that.” Far too many times for a clergyman, the “F word” bursts forth from his lips when he is upset.

As he speaks to the camera, the Reverend loves showing off his expensive possessions, declaring with a smile, “I am the prophet with the beautiful wife and the gorgeous Bugatt.” I imagined images of Jesus trading in the donkey for gold-plated chariot drawn by a pair of white stallions. The Childs live in a McMansion set on an estate that would be worthy of King Solomon. They proudly show off the room-sized clothes closet they share, the pastor proud of his dozens of suits of rainbow colors with shoes that match–and even glitter. There had been some protests from some of the deacons in his church who questioned his extravagance of Prada suits and jet planes, but he had managed to get rid of them, “Because what good are disciples if they are undisciplined?”

All of his material splendor, he claims in his sermon, is evidence of the favor of God. To the faithful he had proclaimed that if he can attain so much wealth, so can his congregants. Only now, there are only five left, most of the other thousands having gone over to a rival church Heaven’s House pastored by the younger clergy couple Keon (Conphidance) and Shakura Sumpter (Nicole Beharie). When the four meet we surmise that the younger couple will become the next generation of false shepherds. The couples are quickly at loggerheads, though their mutual hostility is covered up a veneer of smiles and slick politeness. The Childs want to stage their comeback on Easter Sunday in keeping with the theme of resurrection of their ministry, so Lee-Curtiss smugly assumes that the younger couple will change the date of the opening of their new church building. His hope, of course is that their former members are more likely to give him a hearing if there is no competition of opening dates. He barely can conceal his animosity when told that they can not move their date.

That Trinitie shares her husband’s hedonistic values we see during her trip to the mall where she thinks nothing of trying on hats and leaving with one with a price tag of over $2300. She encounters at the mall a former congregant, their conversation offering a master class in veiled innuendos and insults. Both of these ladies manage to weaponize “Bless your heart,” the old blessing becoming a Christianized curse.

Even baptism, or rebaptism, becomes a source of humor when Trinity, apparently questioning her support of her husband. holds him under water for a tad long enough to make us think she has drowning rather than regeneration on her mind. They argue vociferously whether to say “Ah-men or ay-men” at the end of their prayer, Lee-Curtis maintaining, “All the people that’s hot and popping on the internet, they say the ay-men!”

This movement toward a darker vein intensifies when we learn just a little more about Lee-Curtiss’s transgression. Early on we saw him inveighing against homosexuals, much as Jerry Fallwell does in The Eyes of Tammy Faye. We see in one of the young men who shows up that the pastor had been caught with adolescent boys. This leads to questions about the durability of his relationship with Trinitie. Also, if people do show up for his come-back sermon, will his ministry last? Still, Trinity joins him when they stand outside their empty church and hold up their signs bidding passers by to “Honk for Jesus.” At first, few do. This seems to be his major means of drawing the public’s attention to his Easter service, as we see no television or newspaper ads. One eye-catching prop that he displays is a statue of a Black Jesus robed in palatial splendor with a bright-colored heart on its breast, a Protestant version of The Sacred Heart of Jesus.This figure might bring to mind Kevin Smith’s satire of the Catholic Church Dogma wherein a bishop shows off a Buddy Christ.

This half-sized figure will be on display at various times, including at the end. Look twice at the end—is that a tear beneath each eye, or am I mistaking the reflection of the light for the result of sadness? The actual last face we do see is not that of Lee-Curtiss but of Trinitie. Her expression, or rather, lack thereof, leaving it up to you to discern–are we ending with a note of tragedy, or–? One thing we should know by now regarding the second part of the title, “Save Your Soul.” It might be too late for her husband; he has already lost his soul, but what about hers?

The actors deliver flawlessly both the comedy and the darker moments. This is a film that does more than mock the pretensions of those who use religion to feed their own egos and greed. It also makes us think and see that there is tragedy as well as silliness in this pair of false shepherds. They might succeed in fleecing their flock, but at what cost?

The disgraced Pastor Childs with support of his wife mounts a campaign to win back the 25K members of his church who have left.
More Details