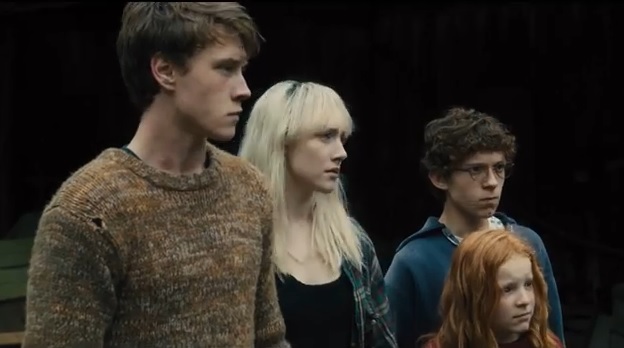 Based on the novel by Meg Rosoff, director Kevin Macdonald’s apocalyptic WW III novel is a good balance of thrilling story and character study.  Saoirse Ronan again proves what a talented actress she is as the jaded teenaged Daisy, shipped from America by her estranged father to live in the country with their English Aunt Penn (Anna Chancellor) and her children.

Daisy’s mother had died while giving birth to her. This has overshadowed her development so that she has come to believe that she is under a curse so that bad things accompany her wherever she goes.

As she will be throughout the film Aunt Penn is busy with her duties as a government official, so it is her cousin  14-year-old Isaac (Tom Holland) and his chatty younger sister, Piper (Harley Bird) who greet her at the airport. Daisy maintains her hostile stand-offish attitude for some time, turning down their invitation to accompany them and their friend Joe (Danny McEvoy) to their beloved swimming hole. Slowly, though, Daisy does warm up the older brother, Edmond (George MacKay).

The youth are left to fend for themselves when Aunt Penn is summoned to Geneva to participate in the on-going peace talks. The kids see that matters are not going well from newscasts about bombings taking place around Europe. The next morning terrorists explode a nuclear bomb in London. The authorities declare martial law. The children’s farm is a way from London, but subject to the Army’s evacuation order that requires the girls and the boys to go to separate camps. Thus ensues a series of events that will tear them apart and in skirmishes between terrorists and the soldiers threaten their very lives.

Daisy is forced into participating in the violence and to grow out of her preoccupation with herself. At one point she says, “Before the war I used my willpower for stupid stuff, like not eating chocolate. I think I thought if I could control myself, then maybe the world around me would start to make sense. I guess I was pretty naive back then.” She was, but at the end of the film, in which there is embedded a glimmer of hope, she has become a sensitive caregiver who will not give in to despair. The situation in the United Kingdom may equal that of the war-torn Judah described by the prophet Ezekiel, but, like that hopeful prophet, we know that Daisy will persevere, her last words being, “It’s like I said all that time ago, if the world doesn’t end I wanna be here at home, with you. And that’s how I live now.”

This review is in the April issue of VP. If you have found reviews on this site helpful, please consider purchasing a subscription or individual issue in The Store.

Shipped off to England to stay with her Aunt, Daisy & her cousins are soon forced to fend for themselves when terrorists try to take over the nation.
Editor Rating ★★★★★4 out of 5
More Details