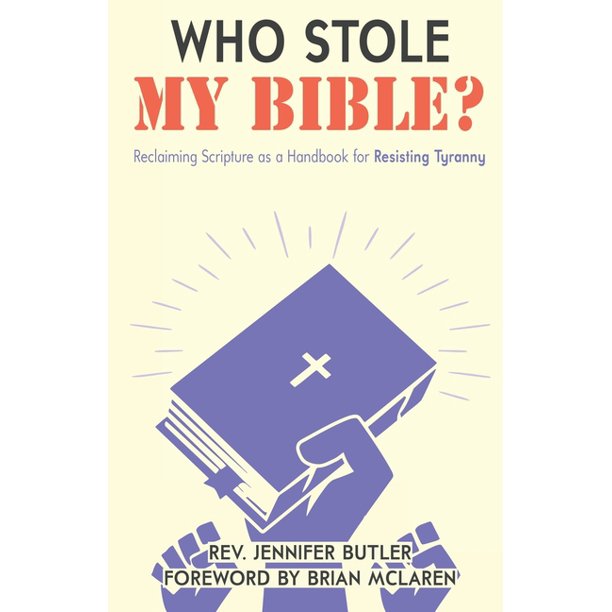 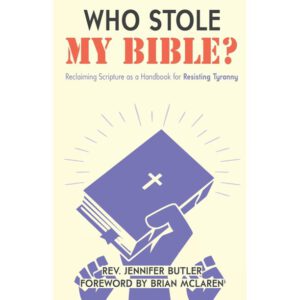 As discerning leaders will see immediately, the subtitle of Jennifer Butler’s new book, could be categorized as a Liberation Theology book. For her, as for theologians who champion the rights of the excluded of all stripes, the Bible is a book of liberation. She is upset at how it is being misused—stolen in her parlance­—by the right wing, the spiritual descendants of those who misused the Scriptures to defend the many forms of oppression–slavery, sexism, homophobia, xenophobic nationalism, and other abuses of the outsider. She has produced a powerful polemic that well complements another one I reviewed here not so long ago, Elizabeth Geitz’s Spiritual Truth in the Age of Fake News. Both women are clergy—Rev. Butler Presbyterian and Rev. Geitz Episcopal—and the clarity of thought and depth of scholarship readily show the stupidity of those who would deny women their rightful role in the leadership of the church.

Although directed to all thinking persons, she singles out in her Dedication those who might have given up on the Bible because of its misuse by so-called evangelicals: “I dedicate this book to brave and sometimes lonely Christians finding their way out of the wilderness and into the streets, May you find joy in reclaiming and resisting.”

She writes not just about the Bible in general, but on specific passages as well, beginning with the Creation story which some mistakenly believe is a scientific description of how the universe came into being, ala their Creation Museum in Kentucky. In reality, she explains, it is about what kind of a God we worship. She contrasts this story with that of the Babylonians, who saw humankind as created to be slaves of the gods, whereas Yahweh fashioned us in the Image of God. The God of Moses and Miriam created people to serve God and neighbor of their free will.

She uses her imagination in telling the Scripture stories, such as one of my favorites, about the three Hebrew midwives in Exodus who resisted Pharaoh’s order to kill Hebrew newborn males. And her exposing the terrible outcome of the Hebrew’s request to Samuel for a king flies in the face of those “Heroes of the Bible” books many of us were fed in Sunday School that never thought the kingship actually was the opposite of God’s desire for his people to be, unlike neighboring peoples, a free people subject only to the Covenant.

Each chapter brings the ancient stories up to date with examples of people today who look to the Bible as “a Handbook for Resisting Tyranny.” Rev. William Barber II and his Moral Mondays in North Carolina; Sister Norma Pimentel assisting migrants in the Southwest; the concerned protestors who would not let the police murder of George Lloyd be “explained” and relegated to yesterday’s news; and more.

This is a subversive book that pastors, especially those concerned that it might be “too political” because she does not hesitate to call out trump and his supporters on their anti-human words and deeds, might place in the hands of conservative members with such words as, “Please read this, and let’s talk about it.” For those who lead more liberal churches, Rev. Butler includes a few discussion questions for all 9 chapters that can help spark a group discussion. And for the serious student she has provided a 3+ page Resources plus pages of end notes that can send the reader to many other works.

The author combines deep scholarship with an equally deep experience. The bio furnished by the publisher states: “Jennifer served in the Peace Corps in a Mayan village in Belize, Central America. A graduate of Princeton Theological Seminary, she also studied public policy and community organizing and graduated with an MSW from Rutgers University. She’s a graduate of the College of William and Mary… spent ten years working in the field of international human rights representing the Presbyterian Church (USA) at the United Nations. She’s the former chair of the White House Council on Faith and Neighborhood Partnerships and was an international human rights advocate. While mobilizing religious communities to address the AIDS pandemic and advocate for women’s rights, she grew passionate about the need to counter religious extremism with a strong religious argument for human rights. “She is the founding Executive Director of Faith in Public Life (https://www.faithinpubliclife.org/), which works to change the narrative about the role of faith in politics, wins major policy victories, and empowers religious leaders to fight for the common good.

My only suggestion for improving this excellent book is to add to each chapter, if there is a 2nd edition of the book, brief suggestions and descriptions of relevant films. I have long advocated the use of films that can add a human face by means of a personal story when exploring social justice concerns—recently I was thrilled by the film NIGHTJOHN, set in the days of slavery, when an adult slave teaches young Sarny how to read, and she jubilantly discovers upon reading the Bible for the first time that the white minister was wrong. “God is on the side of the slaves!” she declares. The denomination to which both Rev. Butler and I belong to has just released my booklet designed to engage folk in studying and acting upon 5 films dealing with racism, “ENGAGING MATTHEW 25 THROUGH FILM: Dismantling Structural Racism. Do not let this discourage you from obtaining the book (at Amazon.com), however! It is a richly rewarding read.